Back To Blog
4 Reasons Why Style Conscious Men Should Care About Fitness
1 October, 2013
Clothing

This is a guest post from Manny over at Well Built Style. He and his co-conspirator are relative new comers on the style blog circuit but their approach is unique and their content is top notch. I highly suggest checking them out and subscribing.

It’s no question that one of the simplest and easiest ways to improve your appearance is by improving the way you dress. To style conscious men everywhere, this is nothing newsworthy. However, despite this knowledge, I’ve noticed that a lot of style savvy men have overlooked a crucial factor that can significantly improve their appearance.

What is this factor, you ask?

We’re all well aware of the importance physical fitness has on our health and well-being, but did you know that physical fitness can also significantly improve your style and overall appearance? I’m sure many of you would at least tacitly agree with this statement, but maybe you’re not exactly sure how it would work. Allow me to explain.

The following are 4 reasons why the style conscious man should pay attention to fitness:

#1 –  Fitness improves your level of attractiveness

The fact is that appearances matter and they matter a lot. As a style conscious man you already acknowledge this, even if only on an implicit level. The simple act of caring how you dress signifies that you understand the importance of how your appearance is perceived by others.  That’s why it only makes sense that you should also care about your physical fitness. Considering the impact that fitness can have on your overall appearance, you would be doing yourself a huge disservice by ignoring it.

Just like having a good sense of style, being physically fit has a dramatic effect on your level of attractiveness. Research has shown that the physical fitness of a man is substantially correlated to his body attractiveness to women. Additionally, science has also determined that on men, women are attracted to bodies that indicate muscular strength, such as well-built upper bodies and muscular buttocks and legs. Moreover, research has shown that among the body types preferred by women, the “V-shape” is considered as being the most sexually attractive.

As a style conscious man who acknowledges the importance of appearances and first impressions, you’d be a fool not to also improve your level of physical fitness.

The purpose of menswear is to accentuate your masculine qualities. That’s one of the main reasons why we wear blazers, suits, and collared shirts. These garments were made to highlight our masculine qualities such as a broad chest and shoulders and a narrow, trim waist (i.e the V-taper). Take a suit jacket, for example. A well-tailored suit jacket enhances a man’s shoulders by building them out. Additionally, the suit jacket’s lapels help build up his chest, while a more tailored waist creates the illusion of a trim midsection. Put together, these effects enhance a man’s natural V-taper (or in the case he doesn’t have one, give him one). That is why a suit is considered the quintessential masculine garment.

However, the benefit of being in shape means that your clothing doesn’t have to do as much of this heavy lifting. Your physique will speak for itself. Working out consistently will broaden your chest and shoulders, while a proper diet will reduce the excess fat around your midsection. This will make all of your clothes drape that much better on your body (i.e. you’ll be a much better canvass). You will no longer have to worry about hiding your gut behind a waistcoat, or ensuring that your shoulders look broad enough under a jacket. 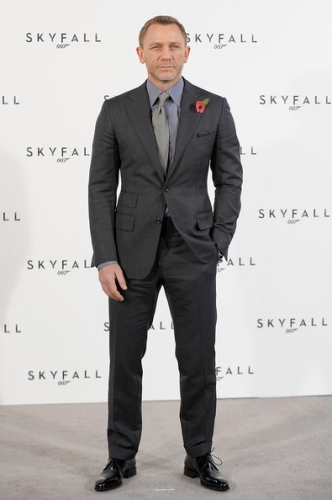 It’s not just the cut of the suit that makes Craig look good. He’s also in excellent shape.

#3- Fitness will improve your casual style

As a style conscious man, being in shape also means that you will look that much better in casual pieces like jeans, shorts, t-shirts, and polos etc. As mentioned in the previous point, being in shape means that clothing will drape better on your body and this is no more evident than when it comes to men’s casual wear. When you’re in shape you’ll notice that items like t-shirts and polos will flatter your physique. These garments will naturally display your well-built chest, shoulders, and arms. Additionally, when you’re in shape you will often look better in a pair of jeans and a v neck t-shirt than the vast majority of men wearing tailored suits. As a well-built man, casual wear will become your bread and butter. 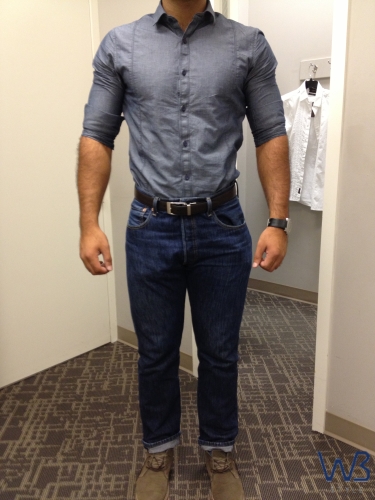 No need for a suit jacket to build out my shoulders.

#4- Fitness will separate you from the pack

As a style conscious man, by improving your fitness you will dramatically separate yourself from the pack. The fact is that the average man is fat. The average man also has a poor sense of style. Now you may see some men who are in good shape and some men who have a good sense of style, but rarely do you see a man who possesses both qualities. You can be the exception. By being the exception you separate yourself from all the other average men out there. This becomes your X factor. It’ll be the extra edge that will land you that next great job, get you a promotion, or get the girl. That’s why it’s in your best interest to spend time on both endeavors.

Some of you might be thinking, “But I don’t have the time to dedicate to improving my fitness.”

The time you spend browsing the internet or watching television during the week could be better spent invested in the gym.

We’re all given the same 24 hours in a day. The only difference is in how we prioritize our time.

As a style conscious man you understand the importance of appearances and first impressions. You realize that by improving your sense of style, you demand the world take you seriously as a man. But your personal style is only a part of the equation. Your level of physical fitness is equally as important and has a significant impact on your style and overall appearance. Fortunately, with just a little extra time and dedication devoted to improving physical fitness, style conscious men will be able to elevate their look and truly separate themselves from the average man.

Manny De La Cruz is a lifelong fitness enthusiast turned style aficionado. He is the co-founder of Well Built Style, a website dedicated to helping men around the world overhaul their look through style and fitness.