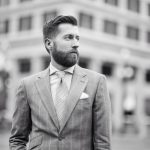 My name is Tanner Guzy and I want you to dress better.

I grew up in a family where a reputation mattered. It comes with the territory of having a unique name and, whether I liked it or not, the way I dressed affected my reputation.

When I was in junior high I made sure that all my T-shirts were from the BMX companies whose parts I owned or the punk bands whose shows I attended. As I got older, I learned that my clothing reflected more than just my status within my chosen hobbies and I had to adjust it accordingly.

For ten years I wore a suit and tie six days a week and it became as comfortable to me as the cargo pants and baggy UGP T’s I wore as a punk kid.

Now I’m able to dress as up or as down as I want, while still telling me story and expressing myself.

A lot of men don’t like to admit to themselves or anyone else that their image matters, so they pretend to just ignore it. But even someone as slovenly as Jeff Lebowski wouldn’t walk out in public in a dress or just a garbage bag. On the most basic level, all men know that their clothing communicates who they are, what they think of themselves, and the respect they command (or fail to) from the world around them.

To start out, dive into my series on the Three Archetypes of Masculine Style. The vast majority of men will find style icons who are either Rugged, Refined, or Rakish – with many of us wanting to dress in some blend of the three. These articles explain the philosophy, the goals, and the pitfalls of adopting any of these style archetypes.

Once you’re done reading them, go take the Archetype Quiz to see which of the three is yours. It’s a huge step towards learning how to dress better. Doing so will also give you the opportunity to sign up for my newsletter and learn more about how to make your own appearance an asset.