Back To Blog
A Healthier Life: Year One
6 November, 2014
Clothing

This is going to be a long post, so feel free to tackle it in chunks.

I’ve always been skinny. All of my siblings are. In fact, one brother’s nickname in high school was 2×4. The name all of his friends had for the rest of our family? The 2x Forest.

Because we’re so skinny we’ve always been able to have terrible eating habits. My younger brothers still exist on a diet of Taco Bell, Flaming Hot Cheetos, Five Guys, and grocery store burritos. Unfortunately I, like my dad, started to put on some belly fat around the age of 25. 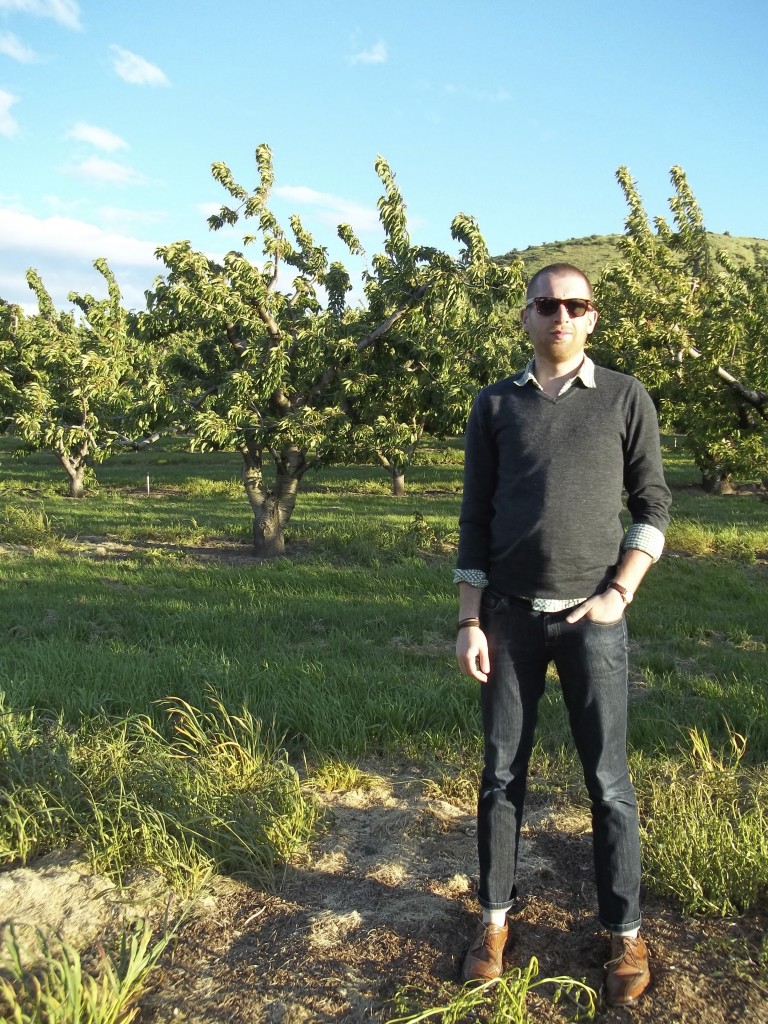 It was subtle at first, but it slowly started to pack on more and more. Around 26, when I was going through a divorce and dealing with some career stagnancy was when it got to its worst point.

I started to make token efforts to look better. In 2010 I trained for and ran a half marathon – nothing changed. After that I started doing one of Men’s Health’s circuit workouts. I believe it was the Spartacus workout. I did it three days a week for about three months and didn’t see any improvements. Finally, a friend who had just graduated and taken boxing classes while in school asked me to come lift weights with him.

It’s comical to look back on how bad that was. We went to a Planet Fitness and my legs were sore after deadlifting 60 pounds for five sets of five. Between my having a newborn and his wife being pregnant, we would only go sporadically. Again – no change.

In 2013 I got my own membership – again to Planet Fitness, downloaded the Stronglifts app, and started going three times a week. I quickly started to see progress in my lifts, but my form was terrible. In June of 2013 I was squatting 165 on a smith machine (those who know what they’re doing are already cringing). I got about halfway up and felt a nice little tear in my lower back. Being the idiot I was, I tried to finish out that set and ended up limping out of the gym.

I never went in to get my back checked out, but it bugged me for quite a few months. I remember the most painful day was playing a round of nine holes of golf with my boss. When we got to number seven, I was wincing at every step. By the time I got home, it took me a solid five minutes to figure out how to get myself out of the car.

In mid September I got a membership at the local rec center near my home and started doing 5×5 again. That first day I couldn’t deadlift more than the 45 lbs bar without it hurting, but I took it slowly and started to rebuild my strength.

Throughout the entire two-year process of my half attempting to take better care of myself, I went paleo. Most of the time I was really good about it, but the indulgences happened more often than they should have as well. I also didn’t keep track of any calories or macronutrients and at one point I started to see my belly get bigger.

In mid October I was reading over at Kinowear and saw an article talking about a health site called Kinobody. I spent some time digging around the site and learning about Greg O’Gallagher – the man behind the whole operation. Greg was advertising his coaching options and I decided to reach out and see if he was interested in doing some trade. I’d do one of my consultations in exchange for him helping me get into shape. Greg responded fairly quickly and was open to the idea, so we exchanged some basic info and got things rolling.

Here are some basic stats from that first exchange.

I didn’t give him number of reps, but my current working ranges at the time were

And here are the photos I sent him: 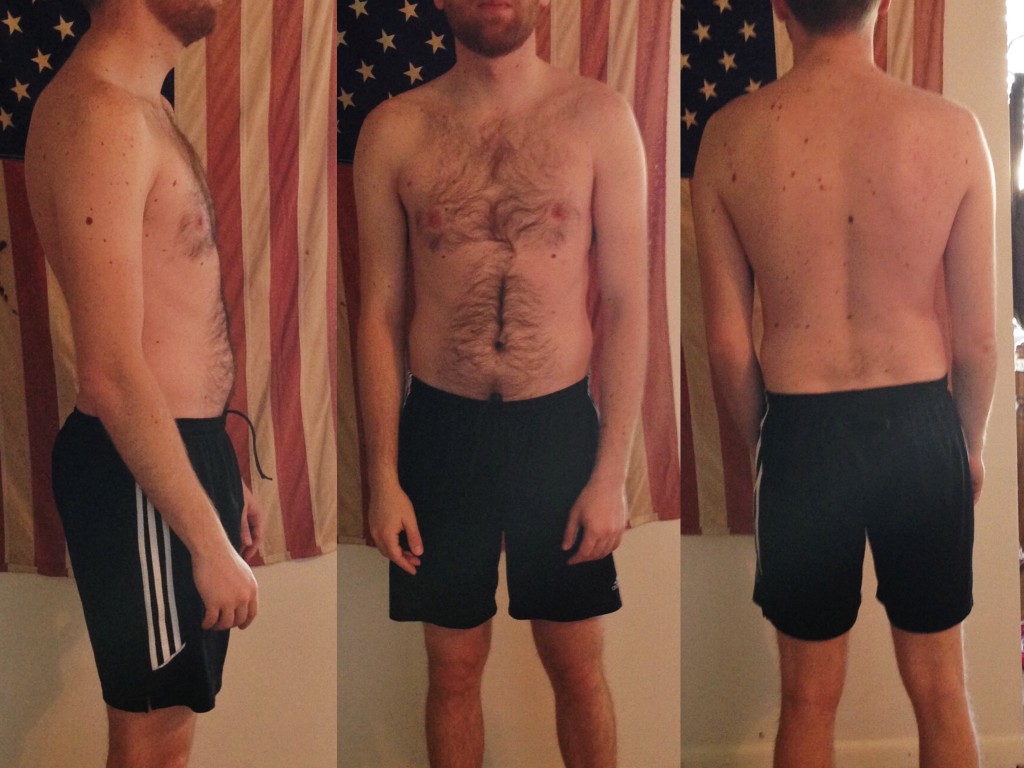 The first thing I noticed and loved about working with Greg is that he didn’t make me feel like an idiot. I didn’t need to be babied, but it was encouraging to work with someone who was always focusing on both the positives of the progress I’d made, and the attainability of the end result.

He gave me a meal plan, that was based on reaching a certain amount of calories with specific macronutrient requirements, and a three-day-a-week lifting regimen. The mainstay of the lifting program was compound lifts, but there were a few isolated movements that were designed to help bring out my chest and shoulders.

He also sent me a spreadsheet and asked for weekly updates on the key lifts and my primary measurements, along with monthly progress photos.

Conveniently enough we moved the same week that I started working with Greg and there is a Gold’s Gym less than a quarter mile away from our apartment (I’m looking at it right now). Going to a real gym had its pros and its cons. The pros being that I actually had access to the right equipment – so no more smith machine squats. With the biggest con being the fact that I was more than just a little intimidated.

To make an already long story a little bit shorter, I varied between cutting and bulking three times during those first eight months. I cut down to my lowest of 150 lbs by mid March but was still a lot softer than I wanted to be. Greg had me start eating more at that point in order to stimulate more muscle growth. In May, it looked like I was going to be running the Spartan race at the end of June and Greg and I decided to have me start cutting again and supplementing my lifting sessions with some long distance runs and track training. The most difficult thing about those eight months was working out alone. Looking back, I can see that I didn’t push myself as hard as I could and should have because I was afraid of the weight and because my form was poor enough that it prevented me from improving at the right pace.

That race didn’t happen because of a weekend fitting trip to Guatemala. A week after I got back from that trip I had two new guys move into my neighborhood. One – named Treg – was a men’s physique competitor out of Idaho (and now the fitness author for Masculine Style) and the other – Alex – was a firefighter in training who loved lifting weights. I saw both of these guys at church and in the gym and we’d talk, but it took me a couple of weeks to ask them if I could tag along for a workout.

That first round was insane. It happened to be leg day and the approach these two had was killer. Rather than the low volume, heavy weight system Greg had me doing, these two did everything. Some weeks were like Greg’s program, others were complete burnouts with supersets and dropsets, and other still were almost like interval training.

Rather than doing full-body workouts three days a week, Treg and Alex practiced the conventional body builder method of working one muscle group a day, six days a week. I was happy to tag along and have these two spot me, and help me with my form.

Treg had done meal plans before and we talked about my goals and what I wanted to accomplish. As much as I loved what Greg had me doing, I wanted to vary things up a bit and try Treg’s advice. The carbs, protein, and calories went up for three months and then we started cutting 12 weeks before my one year mark.

So what are the results? 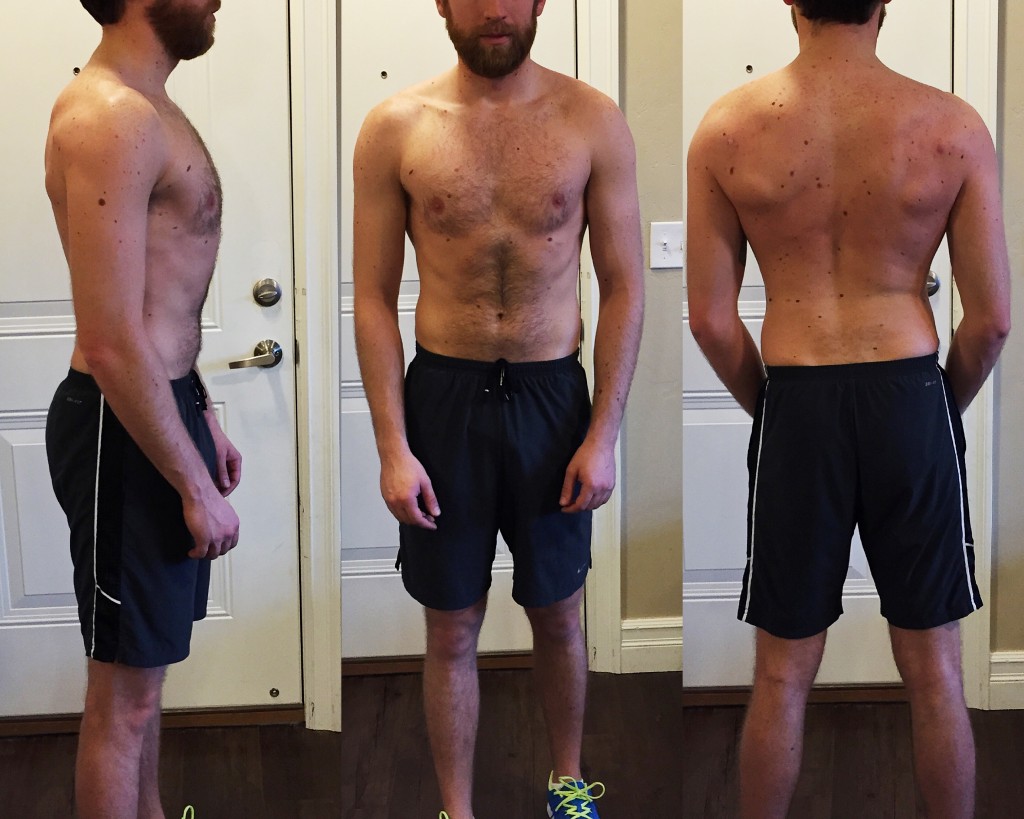 I’m conflicted about the changes. It’s easy to see the online gurus and Hollywood superhero transformations that seem to double my results in half the time. I don’t have the six pack I was hoping for and I’m still not deadlifting 400 lbs. All of that being said, there is some serious improvement there and, for a guy who’s 30, has two kids, and never lifted weights consistently before this year, I’m happy with what I’ve done. 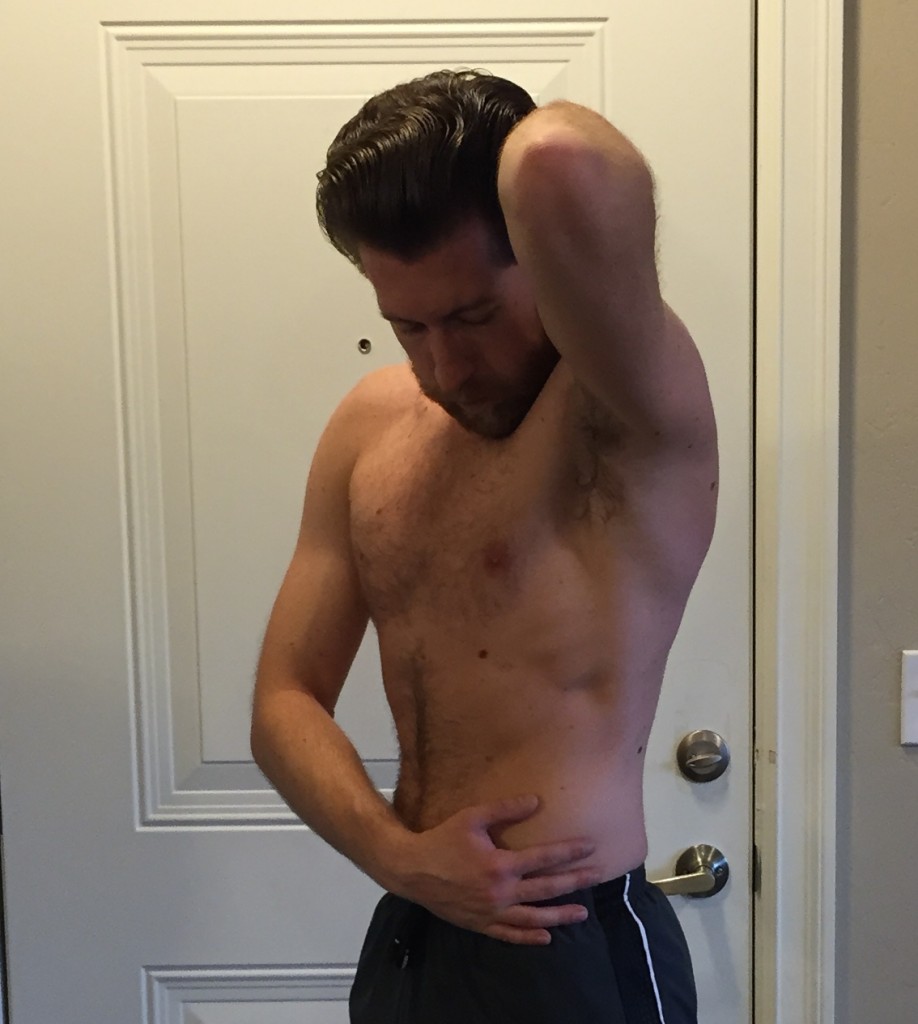 The biggest takeaway is how this has affected the rest of my life. I began getting up at 5:00 in the morning in order to have enough to blog, lift, and spend time with my kids before going to work every day. The discipline to do that wouldn’t have been there had I not already developed more will power when it came to eating right and working out consistently.

I have become addicted to self improvement. If I can control and affect something as gradual as my body, I can exert more influence over every aspect of my life. I’ve never really identified as a victim of anything, but my patience for those who do has decreased drastically as I’ve learned more and more how to developed a central locus of control.

My posture and my breath have improved. My skin is healthier, my sleep is better, and my emotional reactivity is less. I’m more patient with my wife and my kids, but more judgmental of those who are content to stagnate.

And as for style, well my clothes all fit very very differently. 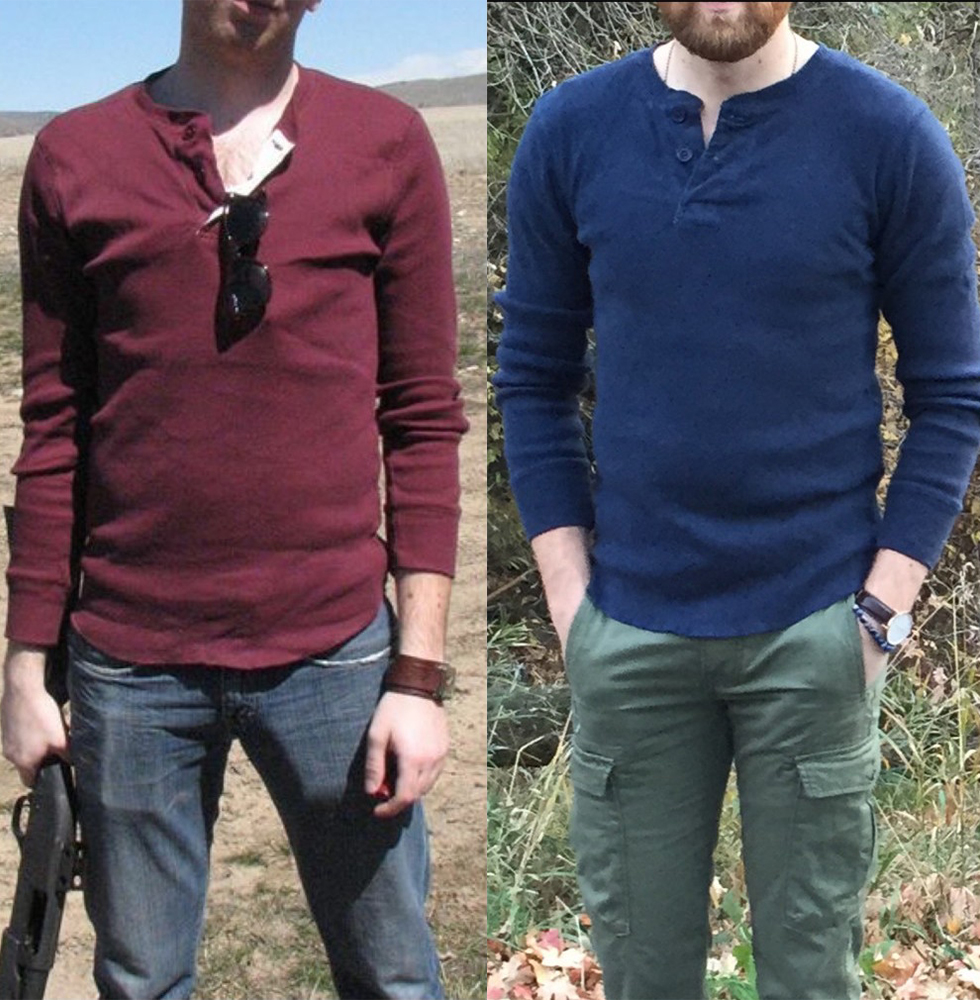 On the left is a shot of me from three years ago. On the right, in a henley of the same cut and size is one of me three weeks ago.

In fact, my biggest hesitation to put on more muscle is that I don’t want to lose more of my established wardrobe. #firstworldproblems, right? While I may have to retire a few suits, slacks, and dress shirts, my T-shirts, henleys, sweaters, and other casual clothing look much better than they did before. I’m not huge, but I’m no longer scrawny.

If you want to know more about what I did, what I liked, what I didn’t, and any other details, sound off in the comments.