Some say that style is for the young. My wife and I were out to dinner this week at a chain, sit-down restaurant and I was appalled at how the men over 40 were dressed. Most had potbellies and were walking around in denim cargo shorts, T-shirts that were two sizes too big, white tube socks pulled up around their calves, and New Balance, Jerry-Seinfeld-style sneakers on. They looked the way you would dress an 8-year-old in the early 90’s.

But the older a man gets, the more ability he has to display the self-respect he’s earned. A lot of younger guys have to fake it until they make it and their clothing is and can be more daring to reflect that. But men who’ve paid their dues have their own sartorial muscles to flex that the younger guys don’t have yet.

The same basic principles of dressing well apply to older men as to the younger – stay in shape, wear clothes that fit but don’t constrict, wear colors that flatter your hair and skin tones, and wear something that is activity appropriate while still looking better than all the other men in the room.

When it comes to fit, most Boomers and Gen Xers make the mistake of thinking slim = gay. That may have been the case twenty and thirty years ago, but it doesn’t apply now. I’m not suggesting you go out and buy a pair of skinny jeans, but you can pull off a pair of straight-legged, dark-washed jeans as well as a guy who’s 17 or 27. Unless you have quite a few pounds to lose, avoid anything that is advertised as “relaxed.” It’s going to be too much material to look good on anyone, and, if you are older and in good or great shape, it’s a complete waste to hide that behind baggy clothing.

You older men also don’t need to think dressing better means dressing younger. There are too many mid-life crises that involve Ed Hardy shirts, spiked hair, and boot-cut jeans. Take a classic pair of straight-legged khakis, a slim-fit oxford-cloth button-down shirt in blue (or hell even in pink), and a blue jacket. Think Brooks Brothers with an updated fit (which they do now btw). Women your age will claw each other’s eyes out to get you and younger women will want you even more.

Embrace your age when it comes to certain things that you can wear and a young guy can’t. I look pretentious in a fedora but a man who’s 50 just looks like he’s in the upper echelon of society. I look ironic or stupid in a mustache but an older man looks dashing. If I wear high-wasted pants – even if they’re what’s the most flattering for my build – I run the risk of looking throwback trendy, but a silver fox can pull them off with panache.

I also suggest embracing your age when it comes to your grooming. Younger women are finding traditional masculinity more and more attractive. I’ve heard my own wife tell me a number of times that she’s excited for me to get grey in my hair or have a salt and pepper beard. Remember that your age conveys a hard-earned wisdom and sense of experience that us younger guys envy and women of all ages want and respect. Don’t try to hide it by altering yourself to look younger. Embrace it. You’ve earned it.

Lastly, it’s ok to embrace a simple trend now and then. It shows you’re still a bit current. You may not want to load up on bracelets and canvas-strapped watches, but you would be well served to add in a cotton, patterned pocket square instead of just a white linen one. You might not want to wear candy-cane-striped socks, but having some in purple or with subtle whale prints is going to show that you’ve earned enough respect you don’t need to take yourself too seriously. 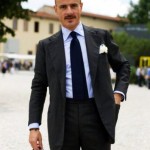 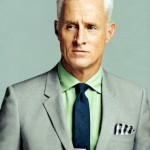 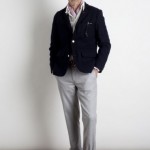 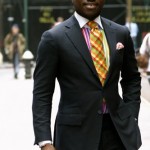 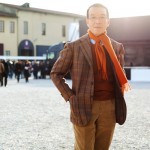 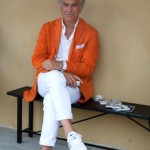