Back To Blog
Every Man Cares
8 August, 2013
Clothing

As much as I try to avoid it, I occasionally find myself standing in line at Wal-Mart. I don’t have any moral issues with shopping there, I just find the real-world examples of the “benefits” of urban living to be disheartening and anger inducing. There’s a reason peopleofwalmart.com exists and peopleofwhateveruppermiddleclassmallyoucanthinkof.com doesn’t.

This past Monday was one of those days that I found myself waiting in line at Wal-Mart’s customer service counter hoping to make an exchange. Immediately ahead of me were two thugs hoping to return a gifted iPod touch without a receipt. They looked a lot like these two. 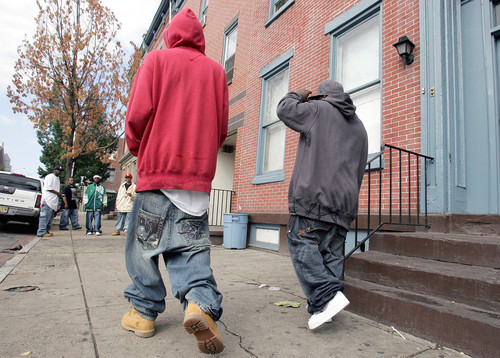 During their numerous attempts to initially sweet talk, then intimidate, and finally pout with one rep and a manager, I found myself with plenty of time to sit back and observe the details of what they were wearing.

It was very obvious that these two were concerned with how they looked. Both had on baggy pants that were sitting well below their cheeks. Both were wearing XXL shirts – one was a plain black and the other looked like a black and red Miami Heat jersey. Both had chain necklaces and tattoos on their forearms written in a flowing, old script.

The one wearing the jersey even had on a black and red, flat-brimmed ball cap with the sticker still on it and brand new black and red Nike’s. To cap off his outfit, he had tucked the extra-wide hem of his ridiculously baggy jeans into his ankle monitor – you know, the kind that criminals wear when they’re on house arrest or some other form of probation. At first I thought it might have just gotten caught accidentally, but I looked closer and saw that it had been tucked in about three-quarters of the way around his ankle. There’s no way it was unintentional.

The point of all of this is to illustrate that every man, even the one who takes pride in being beyond the fringes of respectable society, is aware that his clothing communicates a message. These two probably would have called me a fag, bitch, or some other hilariously inept insult had I called them out on it, but that doesn’t mean they put any less effort into finding the right clothes and putting them on each morning.

Any man who still lives under the delusion that his appearance either is or should be irrelevant is fooling himself. Every man cares.