Back To Blog
Foreign vs Domestic
24 September, 2013
Clothing

On my last post about my final review from Indochino, I received a comment heard often when referring to buying your clothes from a foreign market:

If we’re talking over $450 I’m not sure I see the advantage of going to some foreign web site over established domestic outfits. For ~$650 on the low end you can get an Astor & Black (or similar) rep to come to your house to take measurements, and then come back with the finished suit.

Before I rip into Sam too much, this is a fairly common assumption about a difference between online made-to-measure outfits and “traveling tailors.” If you are paying less than $5k for a suit, it is HIGHLY unlikely that the man who comes to visit you and take your measurements is the same person who is doing all of the cutting and sewing required to create your garments. There’s simply no way for him to make a profit by creating a hand-made suit and selling it at that price – even if he were to make it out of tissue paper.

In order to really understand what you’re paying for in any article of men’s clothing, you need to understand the 3 C’s involved in the manufacturing of clothing. 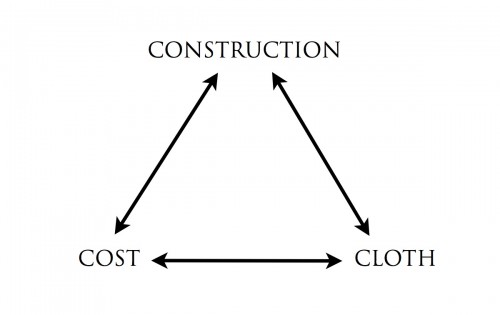 You can pick two, but not all three. For example, a fully bespoke suit off of Saville Row will have impeccable quality and be made of the best cloth; it will also cost you more than a decent used car.

Let’s break these down: 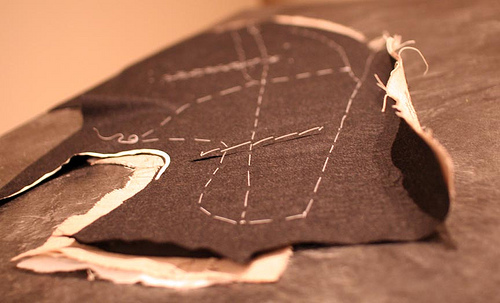 The construction isn’t the weave or quality of the cloth but the actual way in which the suit is made. Custom and off-the-rack companies will vary in their construction types. The top tier is a suit in which every stitch is made by hand by a master tailor. This level of construction requires thousands of hours and multiple fittings. The cost is high, but so is the quality and the ability to adapt the suit to even the most minor body irregularities.

On the opposite extreme is the mass-produced, cheap suit that is churned out as much as possible by machine. Machine work saves time and money and provides a suit that won’t last long, but doesn’t cost much either.

Labor costs in developing and Asian countries are cheaper than those in the West – plain and simple. One aspect of a global economy is the ease with which a company based in one country can shift its manufacturing operations to another. This allows the company to maximize its profitability by decreasing its costs. Simple econ stuff. By having your suits made in a factory in which they can pay their laborers less money, these “domestic” suit companies can offer you something that comes in under four figures.

Tucked into this aspect is a potential fourth C – customization. One of the main reasons off-the-rack suits can sell for so much cheaper than custom is because of the ease with which these suits are made. By only offering one lapel, one pocket type, one button type, one vent, one lining, low armholes, non-functioning buttonholes, and no pick stitching, mass retailers are able to save millions of dollars in construction costs each year. The fit may not be great, and the details may not be what you want, but you pay for what you get.

The last component of construction is what goes on in the interior of the suit. Simple differences like a free-floating canvas vs a fused lining help prolong the life of the suit, give it a better drape, and also increase its price. 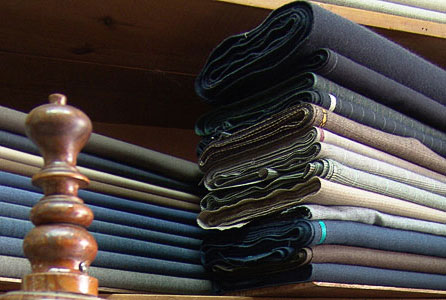 Technically you can make a suit from anything. However, you can give a bolt of cloth from Joann’s Fabric Store and one from Zegna to the same suit maker and the quality of the finished product is going to be incredibly different.

There are a lot of different aspects that are factored into the quality of a cloth, and – just like any other industry – some of them are superficial while others are entirely practical.

Natural fibers like wool, cotton, linen, silk, and cashmere are more costly than their synthetic counter parts. Not only is a wool suit going to drape and breathe better than something made entirely out of polyester – it’s going to cost more. The scary thing about men’s suiting cloth is how easily customers are deceived by the mills from which the clothing is sourced. If you take a look at the inside of a cheap suit – it will probably say that it is a wool blend. However, the percentage of wool to the other “blended” fibers is rarely outright disclosed. You could be wearing something that is 98% polyester and 2% wool, but it will still be branded the same “wool blend” as a suit that has the ratios reversed.

On top of the type of material used is the way in which it is woven. One of the easiest gauges of this is the super count. Unlike thread count on your bed sheets, the super count is a measure of how tightly the fibers of the cloth are twisted before they are woven into a bolt of fabric. The tighter the twist, the higher the super count. Don’t automatically assume that a higher count means a superior product. While a tighter twist does provide a softer, more buttery feel to the cloth it comes at the expense of durability. So man who has ten suits in his rotation is free to splurge on a Super 170’s wool while the man who has to wear the same suit three days a week should sacrifice softness in the name of durability.

The rarity of the material is also an issue. Synthetic materials are easily and cheaply replaceable. Whereas some suits are made specifically from the hair of a goat that only lives in one region of the world. Again, simple economics is applied here and an item’s scarcity can increase its asking price.

The last aspect of cloth is the name of the mill. Yes there are superficial aspects of this rubric, but there’s a reason certain mills have been in existence for hundreds of years. When sourcing cloth from mills like Loro Piana or Zegna, the cost of the cloth itself may exceed hundreds of dollars – making the suit an expensive investment. The counter to this is off-brand mills located in parts of Asia or South America. Their location and relative newness to the scene command less money than the Italian and British powerhouses.

The best suit makers are those who can offer a variety in both construction and cloth, giving their customers a broad range in cost.

So, bringing this back around to Sam’s original comment – there is little to no difference between a company like Indochino who outright publishes that their construction is done in China, and others who will only admit to this when backed into a corner.  Yes it’s nice to have a professional come and take your measurements, but more often than not, this is a gimmick used to increase the perception of quality as opposed to an actual improvement. This isn’t to say that companies akin to Astor & Black (who have now filed bankruptcy) are any worse than the Indochinos of the world, but it is to say that they’re not inherently better.