It’s time to talk about a clothing problem that is completely unique to men – our balls. We love them, we protect them, but many of us will sacrifice them in the name of style. Here’s an email I got from a reader a couple of weeks ago.

I’ve really liked your site and definitely learned a lot from it.

I have a question about skinny jeans though. I’ve been wearing Levi’s 514s and 508s for a while. Judging on your comments on the site, you don’t consider these jeans “too restricting”.

But honestly, my boys are dying in these jeans. I like the slim look, and I’m a slim guy, which is why I’ve been torturing myself wearing these. Usually I end up letting them sit awfully low (to a point that it looks bad) just because of the issue of comfort.

Maybe I just have a bigger pair than is normal, but in 514s which aren’t terribly skinny, I just can’t do it anymore.

Any guidance on this front would be lovely, and I’m sure a number of guys are suffering like I am.

Now I know this is not a problem for just my one reader and I’m glad he decided to ask me about it. At first it seems to make sense that this is happening because he’s wearing skinny jeans. However, the sizing in your legs and even around your hips has no effect on the boys whatsoever. The determining factor in whether or not you can get through a day without feeling that unique stomach pain we all know too well is the rise of your jeans.

For better or for worse, over the last 20 years men have been wearing their pants lower. You can blame this on rebellion and gang association but the truth is that the placement of a man’s pants have varied quite a bit depending on the decade’s style. Have you ever seen a suit from the 30’s? Large lapels, extra long jackets, and high-waisted trousers were fairly common place back then (btw, check out the Houndstooth Kid from the picture above, he writes a great blog about classic men’s styling). In fact the 30’s were the stylistic antithesis of where we are today and can show how much the pendulum swings in men’s style.

As a way to compensate for the comfort issue (Have you ever tried wearing your pants higher? It’s incredibly uncomfortable for a few days until you get used to it). Many manufacturers have jumped on the bandwagon by making their pants in a low rise. This solution allows men to wear their pants in a way that’s comfortable for them while still avoiding looking like an extra in the penguin seen from Mary Poppins.

Unfortunately, there’s one major downside to this – a lower rise means there is less room and that leads to some serious cojone constriction. Double that when you’re trying to dress up your jeans by tucking in a button-up shirt. You have to hike them up higher than they’re meant to be worn in order to keep your shirt tucked in. But doing so means you become a faux soprano by having those low rises converted to a mid rise. There’s no way to win.

So the solution is to adopt a mid-rise pant. Thankfully most dress trousers and suit pants are still cut this way so it’s only a matter of finding viable options in your casual pants. A mid-rise jean can still be dark, simple, and slim like they’re supposed to be, while providing ample room for Butch and Sundance. On top of giving you extra room, wearing a mid-rise jean will actually make your chest look larger. Let me explain.

The ideal proportions on a man mean his top half should be the same length as his lower half, and the best way to accomplish this for most men is by wearing their pants just above their hips. In a world of low-rise pants, the majority of men look like they have stumpy legs and extra-long torsos. We’ve adjusted to these visual cues and when we see a man who’s wearing a mid or high-rise pair of pants his legs look longer and his chest looks shorter – which makes it look proportionately broader.

So here’s the bad news. Because the majority of men now wear low-rise jeans it has become increasingly difficult to find a pair that are cut higher. With limited options, you’ll have to make some sacrifices.

The first option is the best but also the most financially difficult – invest in a pair of designer jeans. I don’t mean Ed Hardy or anything gaudy. I mean from companies like APC, Citizen, and Naked and Famous. You’ll pay a whole lot more than you will for the Levi’s you get at a Macy’s One Day Sale, but you’ll also have something that will fit you better, last longer, and be more comfortable. 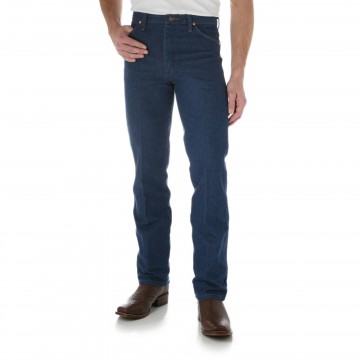 The second option is to go complete cowboy and look for a pair of Wranglers or Lee jeans. The downside is these start venturing into high-waisted territory instead of staying comfortably in the middle.

The third is to opt for a pair of Levi’s 513’s or 501 shrink-to-fits. I haven’t heard how true the mid-rise is on these but they’re better than other jeans that are advertised as low rise.

Regardless of which option you choose, I recommend you do your boys a favor by looking for clothing that isn’t going to strangle them.

PS. Don’t forget that I’m doing my own sale this week. They’re the biggest deals I’ve offered and you can even buy them for someone else as a gift.