On my way to and from work, I used to listen to a lot of talk radio. However, on the recommendation of a friend, I started listening to various podcasts a few months ago.

One of the most interesting and probably my favorite podcast is Dan Carlin’s Hardcore History. Carlin is an excellent story-teller (a skill I seriously lack) and does a fantastic job of scrubbing away modern biases in order to help his listeners attempt to understand the events he discusses from the perspective of the people experiencing them. History is always a bit revisionist, but Carlin’s attempts to mitigate those effects make the stories more compelling and the people involved more understandable.

Obviously I’m hyper aware of discussions about appearance and one of the most common things Carlin does in each episode is describe the clothing of the people he’s discussing. Whether it’s the danger of bright red pants being worn by the French in the first months of World War I or the clothing made from the skins of field mice worn by the poor Mongols before Khan conquered China, the story is always fleshed out by describing what the people wore and how they appeared.

I don’t know Carlin’s preparation methods, but I highly doubt he consciously plans to include these stylistic descriptions each episode. Rather, I believe it’s a natural interjection that simply manifests how ingrained it is in all of us to make judgments and assessments based on people’s appearances.

Because I believe clothing, grooming, and other aesthetics have always been a part of the way men communicate our masculinity, I started to get more interested in the styles of these historic cultures and thought it would make for an interesting series of posts.

For now, these will follow along the lines of some of Carlin’s more-recent episodes. He provides a good springboard off of which I can jump and start doing my own research.

In his episode “Thor’s Angels,” Carlin addresses the fall of the Western Roman Empire to the “barbarian” Germanic tribes. One of the more interesting aspects of this takeover is how ingrained the Germanic peoples were within Roman society – especially its military society. There were points of time in which commanding generals for both the Eastern and Western armies were both Germans. This influence would rub both ways as the Germans would become more Romanized and the Romans would adopt the styles of Germany.

Carlin references the rebellious, stylish Roman youth adopting specific German styles like skin-tight pants and fur coats and cloaks. He continues his description by comparing the German soldiers and their style to that of the modern biker gang – something the disaffected youth of both ancient and modern times would readily identify with and attempt to dress like.

Pictured above is a painting done by Andre Derenceau depicting Alaric’s sacking of Rome. Note the distinct differences between the conquered Romans and the conquering Goths. The men and women of Rome appear in the stereotypical, perfectly manicured style we associate with Roman citizens during the height and decline of the empire. Sheer white togas with accenting robes of royal hues and expensive dyes, perfectly manicured hair on both the men and women and clean-shaven faces on all of the men, shoes and robes that are better suited to expressing wealth than fighting, jewelry, pottery, and treasure are all visible on the streets of Rome.

Contrast the luxury and genteel appearance with that of the Goths. The strongest contrast is that of the men’s hair and grooming styles. As opposed to the shorter hair and clean faces of Roman citizens, the Goths and Gauls were known for hair more recently associated with punk and metal bands. Although it is not depicted in the painting, many of the barbarian men would dye their hair red as a mark of both class and rank, while the Saxons would later introduce even more vibrant and unnatural colors as a way to instill fear in their enemies.

While many would shave the back of their heads to create a jarring contrast between short and long, hair length was considered a marker of social status amongst Germanic men. The most common style was to let the hair grow waist length and then tie it in a knot on top of the head (as pictured on the main Goth in the painting). This is believed to have made the men appear both taller and more dominating in battle. For a man, having his hair short or completely shorn was a sign of submission and was often used as a way to mark slaves and outcasts. The men would even use rancid butter as a primitive form of pomade to help shape and style their hair.

While the hair is important, the mustache is most often associated with the barbarian aesthetic. While the civilized Romans were clean-shaven or only had hair on their upper lip when it was part of a full beard, the Germanic men set themselves apart by only wearing a mustache – a bit different than the mustachioed, limp-wristed hipsters we see today. For many Romanized Germans, Gauls, and others, the mustache was a way to show off ethnic heritage. These men would wear the traditional styles of the Empire and speak perfect Latin, but still make a nod to their bloodlines by shaving everything but their mustaches. 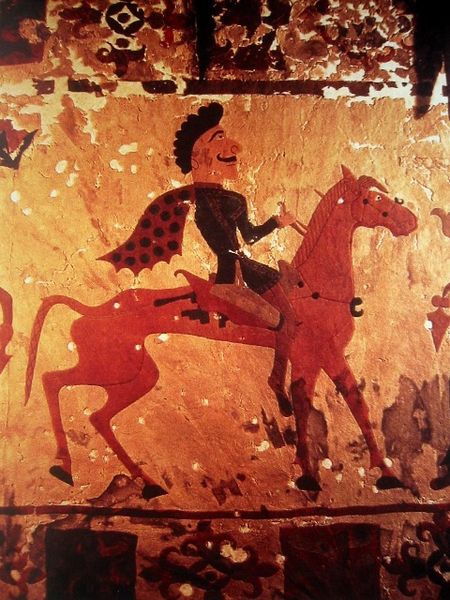 Their clothing is also an obvious contrast. Rather than the flowing robes that are impractical for fighting, rough terrain, and the manly art of conquering ones enemies, the Visigoths are seen in leg wraps – believed to have been originally developed to help protect the men’s legs from both the moisture and dense brush common in the parts of Europe from which these tribes originate.

The shorter length of the tunics and the cut-off sleeves allowed for maximum mobility – making them ideal garments for the quick movements required in battle.

Both men and women would dye their tunics, braid their hair, bathe regularly, and many digs have found that most carried a comb with them at all times.

What becomes obvious is that the barbarian tribes were equally as invested in their appearance as the Romans. For many it was a continuation of a heritage of which they were proud. For others it was a direct contrast and rebellion against the norms and trappings of respectability within the Roman Empire – neither of which sounds all that foreign when compared to the reasons rebellious and countercultural men dress the way they do today.