Back To Blog
Home Staples: The Scented Candle
30 May, 2014
Clothing

Whether he wants to incorporate them as part of the visual appeal of his place or keep them completely hidden, a man’s home should smell like a man – not like his gym bag smells like a man, but how a bar, wood shop, or hunting lodge does.

The connection between scents and our emotions is strong. When I’m experiencing a wave of nostalgia, I almost always remember the smell of  a certain event or place. I still associate the smell of a particular laundry detergent with my aunt and uncles’ house at which I would spend a lot of each summer as a kid.

Having a masculine scent throughout his place can improve one’s living situation in three different ways.

First, it makes him more comfortable in his own home. For some men it creates a sense of familiarity and routine. These men, who appreciate the consistency of the way their place looks and feels, will be able to deepen that structure by working with a consistent smell. For those who like variety and variation, it’s easier and cheaper to do so via a different scent than purchasing new furniture every month. Whatever it is that makes a man feel comfortable, smell can help increase the effect.

Second, it makes other people more comfortable in his living space. All people acclimate to their scents. We’ve all spent time in places that smell too strongly of disinfectant spray, dog urine, or dirty diapers. We wonder how these people can stand to be around the smell when really they’re so used to it that it doesn’t even register anymore. It’s the same reason people from different cultures have distinct scents. A man may not know that his place smells bad, but why risk it when he can make others more comfortable by ensuring it smells great?

Third, it communicates intentionality and a deliberate attitude. Many men simply focus on omitting offensive aspects of their lives. They’ll think they’re dressed ok as long as there aren’t any major stains or rips in their clothing, they convince themselves they’re healthy as long as they don’t have a debilitating disease, and will believe their homes don’t have to smell great, they just shouldn’t smell terrible. They perform the bare minimum of taking out the garbage, cleaning, and maybe using a disinfectant. The last thing a deliberate man does is simply focus on getting to a neutral. Instead he works on commission along with omission. Rather than calling it good enough when his clothes aren’t dirty, he focuses on developing an intentional style. Instead of believing health is merely the absence of disease or sickness, he works on his body through proper diet and exercise. And, instead of being satisfied when his place doesn’t smell like anything at all, he takes advantage of the opportunity  a great-smelling home can provide him and others.

Some people in his life will consciously see his intentionality while others will simply recognize there’s something different about him. I’m not saying that buying a candle will automatically increase the respect of those around him, but it will contribute to the persona of a man who lives deliberately.

Scented candles may conjure images of the girly, flowery “delights” found in malls and grocery stores across the world. However, over the last few years, there has been a large push to spice up the smells of  a place with scents that have an inherent manliness. Prices can vary all over the place – from sub $10 to over $100 – and often depend on things like the wax used, the number of burn hours per candle, and the brand making them. Here are a few worth checking out. 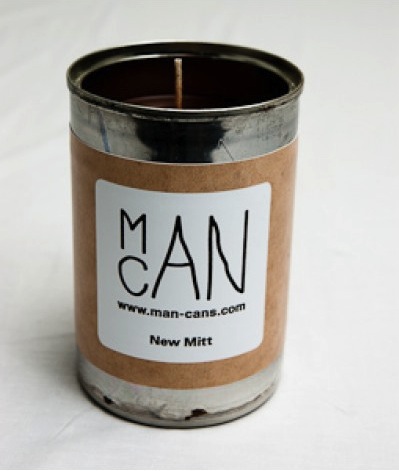 Man Cans: Remember my review of these guys from a couple of years ago? Well it looks like they’re still going strong. I was happy with all of the scents I tried out (campfire, fresh-cut grass, grandpa’s pipe) and these come in under $10. They’re a great way to dip your toes into the world of scented candles without making a major investment. 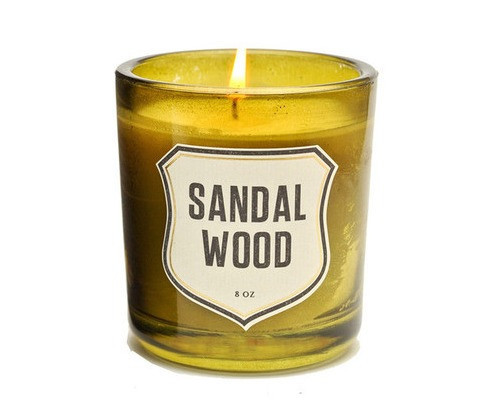 Izola: Classic smells, simple aesthetics, and a moderate price point  ($35) put companies like Izola right in the sweet spot for men who want a longer-lasting candle, but don’t want to commit to a scent for a more than a couple of months. Apparently they’re Sandalwood is top notch.

Blind Barber Tompkins Candle: A behemoth of a candle commands more of a price ($88), but it’s hard to argue with all of the scents associated with a traditional barbershop. Fresh towels, honey, lavender, smoke, and leather are all alluded to with this beauty and it won’t look bad out on display either.

After deciding to pick one of these up, know that there are a few tricks to burning them correctly.

The wick should be trimmed to about 1/4″ before lighting. Not only does it help prevent debris from floating in the wax, it prevents the flame from flickering and lighting.

In order to keep the burn even, keep the candle lit long enough that the surface completely liquifies.

Put it out after the wick has gotten long enough it starts emitting soot.

Avoid anything kitschy like mustache or ironic candles and start off with smells that occur in nature. Some men prefer to vary their scents based on the season, others with their mood, and some merely want a smell that will always be associated with them.