When I got my first gun I had a very difficult time figuring out how to carry it without printing (when the outline of your weapon is visible through your clothing via its imprint). Most men I know who carry don’t have this problem because they wear ill-fitting clothes and the gun gets lost in all the extra folds of fabric. That doesn’t work for me though. Another option is to spend the money to have all your clothing altered to accommodate carrying. This gets pricey but will be an option I consider as I have my clothes tailored in the future. I spent a lot of time online trying to find some tips on how to carry discretely in clothes that fit without extra alterations and found almost nothing.

My own experience led me to the conclusion that there are three important aspects of carrying concealed.

The fourth would be accessibility but I figure this is non-negotiable. Why carry if you can’t access your weapon?

For the most part, you can have two of the three but not all three. Breaking it down this way makes it easy to see why most men wear their baggy clothes and conceal relatively easily. They focus on conealability and comfort at the expense of style. When I first started out I didn’t have the option of buying a whole new wardrobe of massive clothes so I had to sacrifice the comfort aspect.

I knew before making my purchase that this was the problem I would be facing so I selected my gun accordingly. This is my every-day carry. 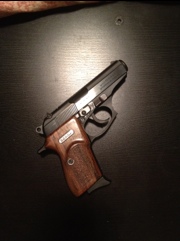 It’s a Bersa Thunder .380. I knew I wanted a semi-auto and the Bersa is similar to the Walther PPK in that it has a metal construction, slim frame and small profile. I know a .380 doesn’t have the stopping power of a .44 but it’s big enough to do the job and the gun you have with you is better than the one you leave at home because you can’t carry it well.

I think the next handgun I buy will be a revolver. A lot of the old guns are even smaller and more concealable than semi-autos. I also know of small Glocks and things like Derringers that are practically invisible, but I wasn’t comfortable shooting those guns. It is possible to find and carry a gun that is both concealable and comfortable to fire.

Initially I thought a shoulder holster would be my best option. I personally wear a blazer or suit every day. I started doing so when I realized my phone was uncomfortably close to my balls all day long. The inner-breast pocket in my jacket is now wear I keep it and I believed the jacket would give me good coverage for the gun. Unfortunately that didn’t work. As small as the Bersa is, it still printed extremely obviously when it was under my arm. My jackets are tailored pretty slim and the difference between each side of my body was glaringly apparent.

Shoulder holster was out.

Next I figured I’d try an ankle holster. I don’t wear shorts except on the hottest days so I had no problem giving those up to carry around my ankle. Problem was that your pants have to be a lot baggier than what you’d think to carry at your ankle. Like my jackets, I have my pants tailored pretty slim.

So ankle holster was out as well.

Essentially this left me with one option – the waist. Now within that there are a number of ways you can carry: Inside Waist Band (IWB), Outside Waist Band (OWB), Small of Back (SOB), and a few more. OWB wasn’t going to work for the same reason the shoulder holster didn’t, the drape on my jackets is snug all the way down my sides and it would print too obviously. So this left me with one real option. If you think about it, the small of your back is the only place on a man’s body where there is some extra space after accounting for clothing that fits. Because of his shoulders and back, the jacket will drape and leave a nice pocket of open space at the small of the back. So that’s the option I went with. 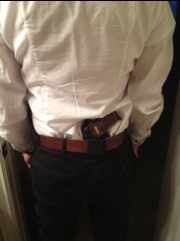 It’s fairly obvious that I’m carrying when I don’t have a jacket or sweater on. But, like I said, I’m almost always wearing one. In the summer you can wear unlined jackets made of cotton or linen and you can hardly feel them. When I do put one on, the gun disappears. 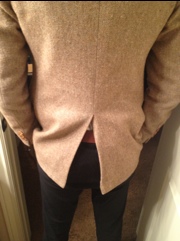 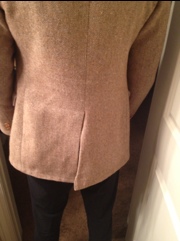 It’s a little tough to tell in the pictures, but I carry at about my 4 o’ clock instead of right at my six. The reason for that is the center vent in some of my jackets. When I carry at my four, I can put my hands in my pockets with that jacket buttoned and the spread of the vent doesn’t show anything. 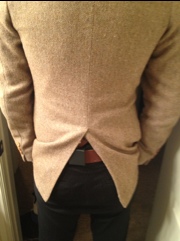 When I carry at my six and put my hands in my pockets you can see the holster itself and most of the time the gun will peak out.

I know earlier I said that you can typically only have two of the three aspects of carrying, but what I’ve noticed over the months, (I only started carrying in August) is that my body has gotten used to having the gun on my waist. There are times when I’m in the car or sitting somewhere and I have to put my hand back to see if I am in fact carrying that day because I can no longer actively feel the gun.

Anyone else had any experience with carrying in clothing that fits?