Back To Blog
#Manspreading
7 January, 2015
Clothing

A man who spends any time tuned into social media has most likely come across his fair share of the professional victim class – the people who always have something to complain about.

At the top of this list of people would be the Tumblr and Twitter activists that make up third-wave (fourth by now?) feminism. To some extent, I can’t blame these people. When their entire identity is based upon their oppression, they have to consistently seek new ways in which they can claim they’re being oppressed. Otherwise they’d be forced to redefine themselves.

In one of the largest #firstworldproblems farces, a new way in which men everywhere are carrying out the sinister desires of the all-so-secret patriarchy is by spreading our legs too wide when we’re seated. It’s called #manspreading, and when it’s done in public, it’s obviously a way in which brutish men can keep womyn under our thumb. Manspreading is characterized by the spreading of a man’s legs to take up more than the allotted space of a single seat in a public setting. It most often happens on subways but can be seen anywhere. 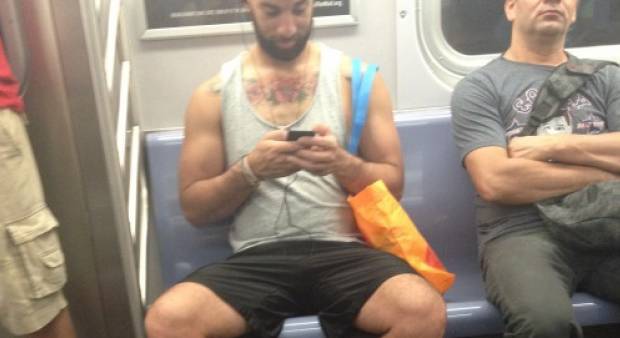 Most normal people would simply ask the manspreader to give them some room and move on with their lives. However, that’s not enough for downtrodden of the modern West. This phenomenon needs to be eradicated. Ironically enough, if a 400-lb woman were taking up three seats on the subway and subjected to a complaint or an eyeroll, these same activists would fault the complainer as opposed to the woman. Body shaming and all that good stuff.

Well, as it turns out, there is scientific backing for the benefits to a man of sitting with his legs spread. It’s all based around how much heat his testicles can handle.

The higher the temperature in a man’s scrotum rises, the more it kills his fertility.

The possession of a scrotum to contain the male gonads is a characteristic feature of almost all mammals, and appears to have evolved to allow the testes and epididymis to be exposed to a temperature a few degrees below that of core body temperature. Analysis of cryptorchid patients, and those with varicocele suggest that mild scrotal warming can be detrimental to sperm production, partly by effects on the stem cell population, and partly by effects on later stages of spermatogenesis and sperm maturation. Recent studies on the effects of clothing and lifestyle emphasize that these can also lead to chronically elevated scrotal temperatures. In particular, the wearing of nappies by infants is a cause for concern in this regard. Together all of the evidence indirectly supports the view that lifestyle factors in addition to other genetic and environmental influences could be contributing to the secular trend in declining male reproductive parameters.

Other factors like being sedentary for too long, diapers on babies, too many estrogens in modern products, wearing briefs instead of boxers, and cell-phones in front pockets all contribute to frying a man’s huevos.

It stands to reason that the more a man can do to keep his temperature regulated, the better his fertility and testosterone production are going to be.

Clothing is another large factor but, I personally like my slim jeans. So #manspreading seems like a pretty easy way to keep the boys cool. The next time someone accuses me of systemic oppression of women by the way I’m seated, I’ll make sure to let them know I’m doing it for the children.