As trustworthy, neutral, and classic as solid materials are, men like to embrace a bit of pattern in our wardrobe. From something as humble as a striped t-shirt to a gun-club sport coat, patterns span the spectrum of formality of men’s clothing and have been with us almost since the beginning.

While there are myriad pattern variations, for the sake of simplicity I’m going to conveniently place them all into three distinct categories: vertical stripes, boxes and checks, and horizontal stripes.

Well not so fast, on top of the three pattern types, the size of each pattern alters its effect. As a result, a man needs to know his overall size and proportions to take full advantage of what a good pattern can do for him. Almost just as important, these rules will also help a man know what to avoid. For the same sake of simplicity we can break up pattern sizes into three separate categories: small, medium, and large.

So now that we have our three categories, we can break them up into an understanding of what patterns should be worn by which man. 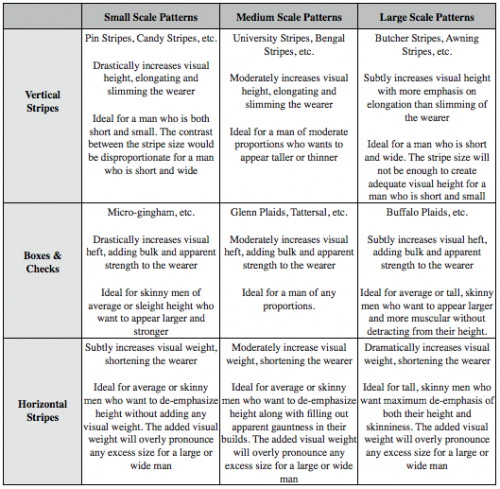 Having a good understanding of the visual effects of each pattern type and its size arms men with the ability to accomplish more visually. Are you always teased for looking scrawny? Throw on something with a box or check and add some visual heft. Feel like you’re a little short? Get some vertical stripes and stand up straight. Get called a lurp behind your back? You know what to do now.

Obviously these rules can be used to help your proportions appear “ideally masculine” but some men like the fact that they’re skinny, or fat, or short, or bulky. You can use these patterns to emphasize body peculiarities just as much as you can to minimize them.