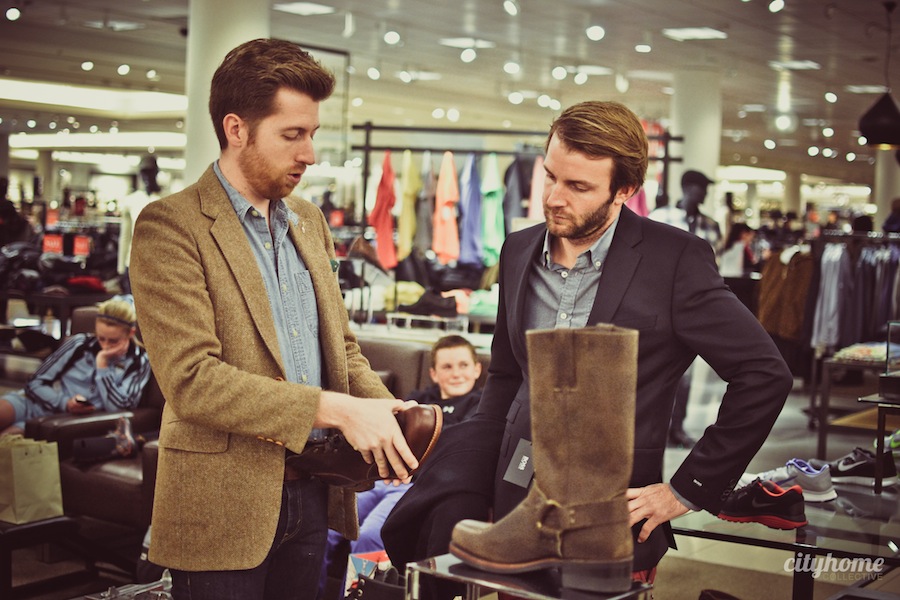 One of the most common refrains I hear about why most guys don’t dress better is that shopping is too frustrating and/or painful. While I get the sentiment and even laud the companies that attempt to make it easier, this is a stupid and invalid reason to dress poorly.

In fact, it’s a serious #firstworldproblem when men consider buying clothing to be a painful experience. I get that it’s uncomfortable; it sucks to feel like one has no idea what he’s doing, and our egos are damaged when we feel un or undereducated about a particular topic. But painful? Pain is having a home foreclosed on, going to war, or losing a child. Shopping may be frustrating, it may be humbling, but it shouldn’t ever be considered painful.

And even if it were, that doesn’t mean it needs to be avoided. I’m in a little bit of pain right now. After a brutal leg day with some new friends yesterday morning, I can barely walk up or down stairs, I resent the fact that my car is a manual instead of an automatic, and the fact that my daughter may drop something and ask me to pick it up fills me with dread. My friends told me tomorrow is going to be even worse. But, that pain is a great thing. It reminds me that I went hard yesterday, that I’m actively improving myself as a man, that I have a body capable of being pushed to the point that it feels pain and then recovers better and stronger.

I’m no masochist. I don’t enjoy pain for its own sake. But I also don’t think it’s the ultimate factor in deciding whether a given activity is worthwhile. Sometimes going to work is a pain. In fact, sometimes writing a post for the site is a pain. Being a father, son, husband, boyfriend, friend, mentor, student, boss, employee, or any other role in which we find ourselves can be painful. Doesn’t mean they’re not worth pursuing.

There’s really only one type of person who lets pain and its effects completely outweigh all of the other pros and cons of an activity or role – a child. And, as a father, it’s kind of a pain to have to teach my children that pain can sometimes be a good thing.

If a man wants to make building a wardrobe, looking for clothing, and improving his image a more manageable and enjoyable experience, there are a few things he can do.

First is to embrace the fact that it’s going to be a bit of work. How much work is dependent on the man, his current style, his style goals, and how hard he’s willing to work to get there. However, aesthetic inertia is the same as any other kind – getting the ball rolling requires a lot more effort, energy, and pain than keeping it moving.

The second thing he can do is to shop like a man instead of a woman. I’d venture a guess that one of the reasons most men find shopping so difficult is because it’s typically done with the women in their lives. Most women tend to browse, touch, try, and experience while they’re shopping. It’s great for them but that kind of attitude will drive the majority of men crazy. The solution is to treat wardrobe building like the mission it is. A man isn’t at the mall for the experience. He’s there to accomplish a predetermined goal. The amount of planning and hyper focus necessary will vary with each man, but knowing what he’s there for and specifically searching for clothing makes the experience more productive and more enjoyable. This doesn’t mean he doesn’t check for other items or even deviate from the course when presented with a better opportunity, it simply means he knows his purpose before venturing into a store.

Which brings us to the third suggestion. A man isn’t shopping, he’s wardrobe building. Whether he hires someone to teach him, reads through great internet sources, watches how-to videos, or even turns to physical books, wardrobe building is better accomplished when it’s learned with the help of an expert. Eventually the man will be able to stand on his own two metaphorical feet, but until he can, he saves himself (and his wallet) from a lot of unnecessary bumps and bruises by turning to someone who knows what he’s doing.

In the end, it doesn’t matter how enjoyable or difficult wardrobe building is, it’s a worthwhile endeavor that will immediately impact a man’s life and help encourage other improvements as well. Embracing the importance of it, and the ways to make it more manageable will help keep the discomfort of doing so a productive pain.

6 comments on “Painless Shopping is Overrated”