There’s a certain dilemma a writer faces when being offered free stuff. You want to maintain your journalistic integrity (ha, like that exists anymore) and honestly post both the pros and the cons of a product; but, at the same time, you want to do so in a way that either doesn’t sound petty or like you’re gushing like a chick about how great it is. This is compounded by the fact that you’ve usually been in communication with the company and honestly want to do right by them because they’ve been cool enough to send you something for free, so there’s a temptation to recommend something you really don’t think is great or to gloss over the negatives of an otherwise good product.

All that being said, I’m throwing that to the wind in this review of the Wolverine Thousand Mile boots. They are awesome and I can’t recommend them highly enough. I’ve had mine for a little over a month now and they’ve seen some serious wear in that time. Their rep got them to me in time for my trip to Oregon a few weeks ago after I told her I wanted to see how they handled the massive amounts of rain and how comfortable they would be on a 14-hour car ride. Since I’ve been home, I’ve had the chance to use them on motorcycle rides, day hikes, and regular wear.

These are a recreation of the original Thousand Miles that Wolverine made back in the early 1900’s. They’re made in America and from a top-quality Horween leather. On top of the quality of the materials, they’re a goodyear welt – which basically means the soles are sewn on instead of glued, giving them more longevity and the ability to be resoled once you wear through them. 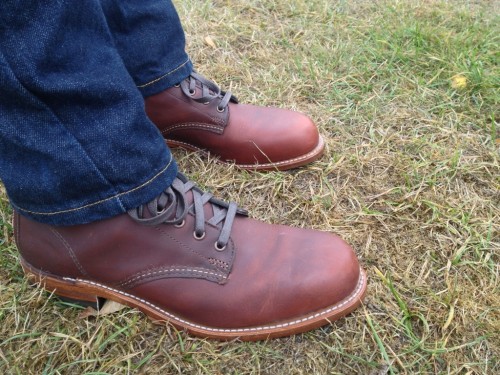 I didn’t have anything that was an overt con with these boots. That being said, there were a few things that may turn some men off to them.

The soles are leather as opposed to being a rubber or even a cork. This presents two primary concerns: waterproofing and grip. A friend who was up in Oregon with us is a Red Wing aficionado and he had on his Iron Rangers throughout the duration of the trip. One of the largest differences between his boots and the 1K’s was that his had a cork sole.

We were curious to see how well they would compare in rain resistance and thankfully had plenty of foul weather and time on the wet beach to get an idea of how well the leather soles would hold up. Throughout the three straight days of rain that we were in Oregon, the only time I felt a little bit of moisture on my feet was after standing ankle-deep in the water for a few minutes at the beach. Other than that, they held up great against the constant barage of moisture.

As far as the grip goes, I’ve had no problems there either. However, I haven’t had the chance to wear them in the snow. Having walked over uneven terrain and in bad conditions, along with wearing them on the motorcycle and using my feet to get that last amount of stop at a light has given me enough of a chance to test out the grip. While it’s not as sure as a rubber sole, the difference is small enough that I’m not worried about it (we’ll see if that changes this winter though).

The other main concern a lot of men will have is the price point. At $345, these are not a cheap shoe by anyone’s standards. However, you get what you pay for. The construction and materials are top-notch and you get a boot that will look good in anything except formal occasions. I’ve even had these on for casual Fridays in an office with them fitting in just great. Boots like this are an investment but you can do the math to see how much they’ll cost you per wear and realize you’re actually getting a better deal. I know I’d much rather drop the initial money on a shoe that will last me 10+ years than having to replace cheaper boots every four years or so.

One last thing you guys should be aware of if you decide to buy a pair is that they run a little large. The company recommends you size down by a half or even a full size from your true size and I agree with that. I first ordered mine in my true size and they were way too big but going one half size down was perfect for me. I’d say go a full size if you’re wearing thin socks and a half if you plan on having these be worn in worse weather with thicker socks.

The look of these things is great. They have a traditional feel to them without coming across as affected. They have clean lines without being dainty, and they can be worn with slacks but still look rugged. There are four different colors available and the Rust I got is my personal favorite. However, the black option is contrasted with brown soles and it makes for a very cool effect you won’t see on most black boots.

They’re comfortable. I was nervous about committing to wear them in the back of my in-laws car for a drive to the coast but I had no problems at all. I’ve had work boots in the past that I wouldn’t wear unless I was on a hike or out hunting because they were so heavy and uncomfortable. 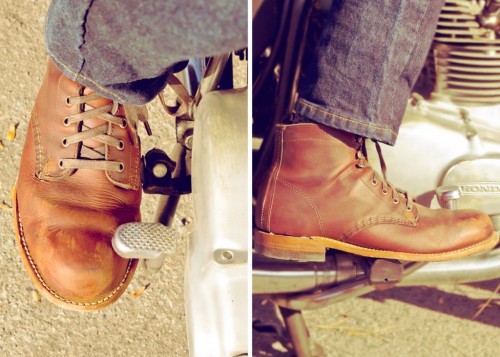 They’re also comfortable when it comes to being used with the bike. My steel-toed boots sacrified a lot of tactile response between me and the break or the clutch. With the 1K’s I’ve been able to have more responsive and safer rides.

They’re masculine. There’s really no arguing that a substantial boot is something that helps a man look more manly. They have a blue-collar ethos with an aristocratic appeal. They make me think of hunting clubs, railroads, and ambition. Pair these with a pair of dark jeans and a good winter coat and you’ll be set from now until the spring thaw.

These will be worth it. If you’re in a climate that is anything short of tropical I actually recommend them as a Staple. They will take the abuse you dish out but shine up well enough to keep you presentable when you need to be.