Let’s get a little disclosure out of the way right off the bat. I work for a company that does custom suits, shirts, etc. – not just as a sales guy, but high enough up the (relatively small) ladder that my input helps shape the direction of the company. Beckett & Robb is technically a competitor to Combatant Gentlemen, although our demographics and approaches are so different there is very little overlap.

The above said, I do not believe that B&R is the only option for a quality suit available. In fact, at a starting point of $695 for a two-piece suit, it can be a tough sale for men on a strict budget. This is where the value of a company like Combat Gent comes in.

I was first introduced to Combat Gent at StyleCon last year. I’d heard of them before, but was able to meet a representative from the company in LA. Great guy with a laid-back approach. We swapped information and a few months later I got a call from their director of marketing wanting to know if I was interested in checking them out.

I always love trying out new stuff, but I knew I wouldn’t wear one of their suits personally. I don’t have a situation in which I can because 95% of my time suited up is spent at or representing Beckett & Robb. However, I have a brother in law who was looking for some new gear for a round of job interviews and asked if they were interested in sending some stuff his way. Here’s Greg in what he used to wear. 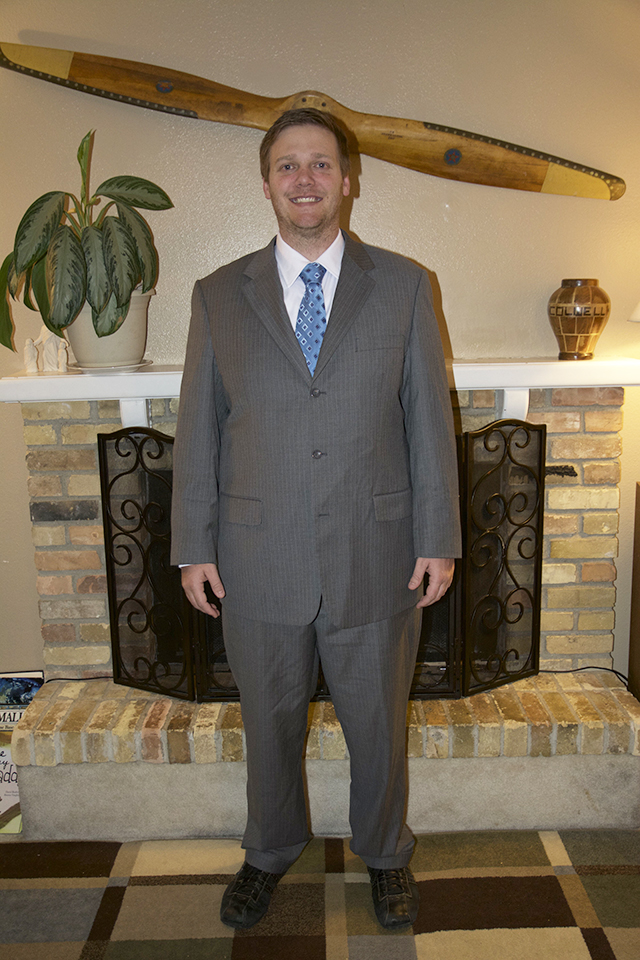 He’s a bigger dude, so fit is pretty tough to nail. That said, this off-the-rack option was looking bad. The style was outdated (hard three-button stance, lower lapel gorge, extra-long jacket and pant rise) and the fit was actually too big in the wrong places (hem too long, massive shoulders, chest, thighs, and sleeves). Greg has owned this suit for years and it’s seen a lot of mileage.

Combat Gent sent over their Modern Fit Charcoal Birdseye, a couple of shirts, and even a couple of pairs of ties.

Before I show the after, I want to dive in a little bit to why the value of this suit is as good as it is. One of the primary reasons suiting is and can be so expensive is because of how many different people and steps are involved. An average example would look like this.

Other than the customer at the very end, every single one of these groups needs to make money off of their product or service. So a $200 suit bought at most of the large chains actually costs about $20 to make. As can be imagined, the quality of the cloth and construction in a $20 suit leaves a lot to be desired. This is where wool blends, often 98% polyester 2% wool, come into the arena.

With most suiting this cheap, the fit requirements are that of the lowest common denominator. Low armholes will fit every man and look good on none. Same goes for bulky, baggy sleeves and large seats. Add all of this to extra wide, extra padded shoulders, and the end result is what Greg is wearing above.

What Combat Gent sent Greg is also a suit that costs $200. However, his suit is made of 100% Italian Super 140’s wool. And, while it’s not custom, his measurements were used extensively in order to get (almost) the best fit available.

Combat Gent is able to do this because they own every step of the production chain. They are a design-to-delivery brand who even owns the flocks of sheep from which the wool comes. So all of those other people above making money off of a suit, and the brand making the high markup in order to generate a livable profit? Combat Gent can skip all of that, make a comfortable profit on their products, and still offer them at prices that aren’t even seen in many department stores.

It’s a cool concept and one that is only possible with the advent of the Internet and online sales.

Before sending over the goods, they asked for about a dozen measurements from Greg. As I mentioned above, these suits are not custom, but those measurements are factored in. Here’s what the finished product looks like. 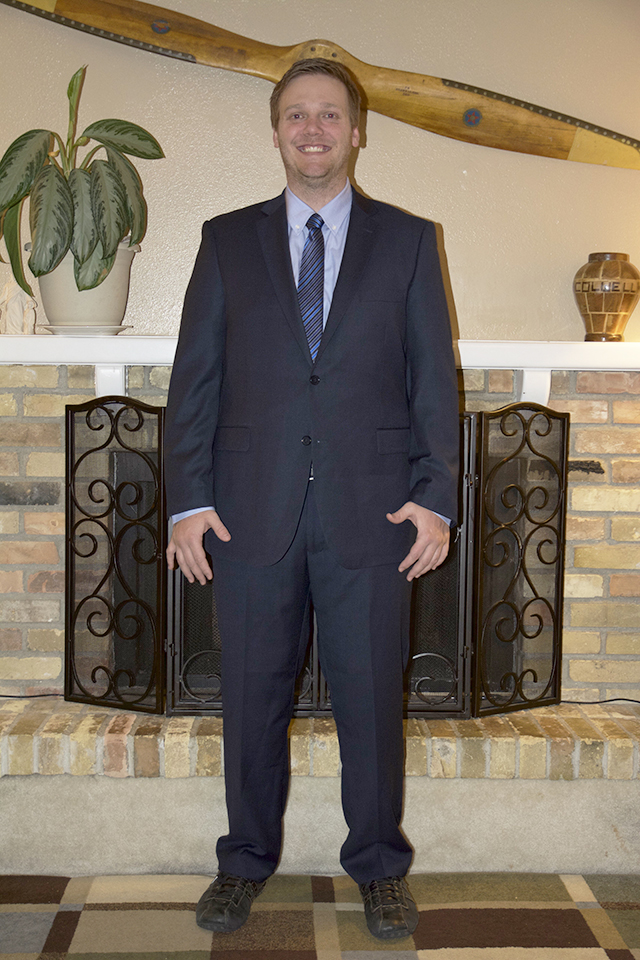 This is a huge improvement over what he was wearing before. The jacket length is perfect and, paired with the higher rise on the pants, evens out the proportions between his legs and his torso – making him look taller and slimmer. The shoulders end closer to where they should, the seat and thighs fit much closer to where Greg’s natural lines are, and the deeper V of the two-button stance helps make his shoulders appear broader.

There were a few things needed some work. First, and Combat Gent makes customers aware of this all throughout the site, the pants come unfinished at the hem at a standard 36″ length. This means the suit will automatically need to be tailored to get the hem completed. While some newbies in the industry may be frustrated by the fact that it’s not ready-to-go out of the box, this is both a standard practice and an advantage. Having done hundreds of fittings, I can say that one of the most difficult things to dial in without an actual garment on a client, is the length of the pants. Rather than taking their best guess, they allow the customer and his tailor to determined the proper length and get it right the first time. For us to get Greg’s altered, it was about $20, so add that to the total of the suit. Looking at the picture, I’d tell him to bring that hem up another inch or so (or wear his pants where he’s supposed to) to get the break just right.

As you’ll notice in the picture, the length of the sleeves is too long as well. Because the buttons are non-functioning, this is another area that can be altered, but it would have been better had they come in a little shorter. Unlike custom companies who take a higher margin and advertise a near-perfect fit, Combat Gent does not offer reimbursement for tailoring services. This is another standard procedure for ready-to-wear suits, and another advantage to choosing to go custom if possible.

I was at Greg’s place the first time he tried it on, and it was fun to see the effect it had on him. As can be imagined, I get my fair share of grief from my in-laws about what I do for a living and what I am wearing when I come over. It’s all done in love and good fun, but it’s great for me to see men in my own life become a little more converted to the advantages of dressing better and more intentionally. He and his wife recently went on a cruise and he took the suit with him to wear for the formal dinner. When he got home he told me a couple of different times how cool it felt to have people throughout the dining hall eyeing him up and down and appreciating the cut of his suit. For a big guy like Greg, it’s a huge difference.

In the end, this is a product I’ll recommend, but only to those who can’t make the jump to go full custom. As those prices continue to rise though (most online companies are now starting above $400), Combat Gent becomes more and more appealing to men on a tight budget. The value of the cloth is unbeatable at this price point and, the fit is about as good as it gets for off-the-rack.

They do some great casual wear as well, so I might have to see how their chinos, OCBD’s, and other items wear and fit too. Either way, check them out. 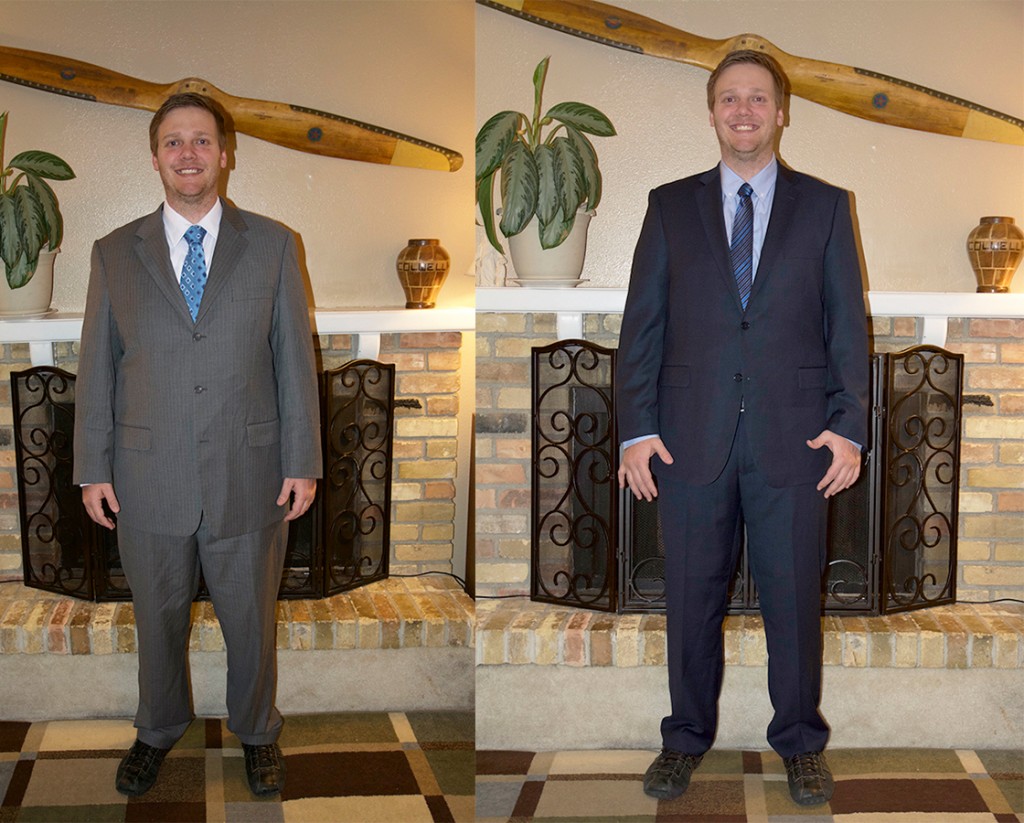