I’ll start off this post by saying that today’s review item is not something I believe the majority of my readers are currently in need of. However, for the subset to which this bag applies, it’s a game changer.

Except for the relatively new readers, most of my following is aware that I’m a father of two young kids. I have a daughter who is just over two and a son at five months.

One of the more unique experiences of being a new dad is going through a baby registry. It’s the same thing as getting registered for a wedding. Essentially the two of you go to a baby-specific shop, scan all the items you think you need when the little one comes, and hope that enough people throw/attend baby showers for your wife that you get everything you need.

Most men have no interest in being involved with any of that, and I totally get it. The way I see it though, I spend plenty of time in my kids’ room and with them, so I want to like what I see both in my home and on their bodies.

As one can imagine, everything is extremely geared towards the moms. Again, no qualms with this – they’re the largest consumer of baby products and they’re also more invested in details like this than most fathers. However, there are a few items that can and do reflect equally on the father – things like the stroller being pushed, the car seat, and most of all, the diaper bag.

Any soon-to-be-dad can tell himself he won’t have to deal with diapers, and any existing father can chuckle internally at how idealistic that assumption is. The truth of it is, there are times when a dad will (and should) have his young kids on his own. It may be a quick trip to the store, a day at the park, or a weekend on his own while his wife is away. Doesn’t matter what it is, a dad will be without his wife, and with his kids in public. And the last thing he wants is a bag like this. 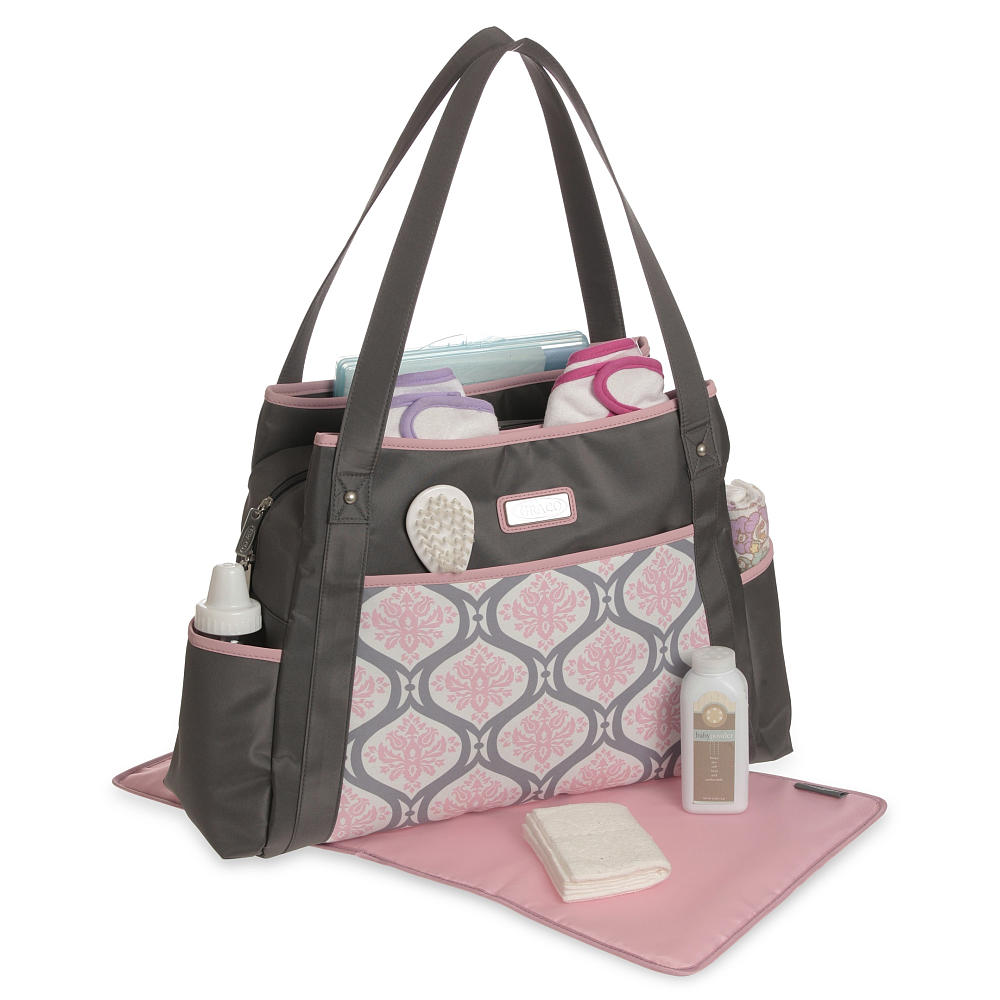 And trust me, I see plenty of dads carrying around these bags. It’s emasculating. It subtly tells the kids, the dad, and the people around him, that he’s a substitute mom at best. He’s second string for when the starter is off the field. He’s just an accessory, not a key component in the family. Basically, it reinforces all of the things we’ve been subtly and not-so-subtly been told about fatherhood for the last 20+ years.

There’s an obvious market hole to be filled here. However, most results on a search for “dad diaper bags” are pretty disheartening. There is entirely too much in the way of camo, skull and crossbones, hot-rod flames, and other “manly” things. They’re purses with stupid attempts at looking cool instead of dignified. Those that are closer to getting it right still have to have something tacky added on like “Daddy’s Little Project.” I may be hypersensitive to the issue, but the cutesy stuff just doesn’t work. Neither do the attempts at being the cool-guy dad. And don’t get me started on all of the sports related options. The idea that a purse somehow becomes more masculine because it has a team logo is even more annoying. If a dad plays for the Broncos, then he can have a Broncos bag. The rest of us should have enough going on for ourselves that our identity doesn’t come from the accomplishments of other men.

Anyway… when we had our daughter we ended up picking out a bag that wasn’t embarrassing for either one of us to carry around and got the job done. It was unassuming but was also pretty boring and looked like a compromise for both of us. 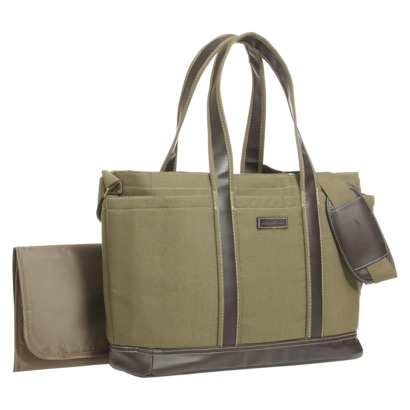 It also only lasted about a year and a half.

When we found out there was going to be a number two, my wife jumped at the chance to get a new option. The plan was for me to make an existing travel bag work when I was on my own, and to let her have something girly since she carried it most of the time. It was a good plan, but not a great one, so I started my hunt for a decent dad bag again.

After spending way too much time online, I stumbled upon Copper River Bags on a friend’s Instagram account. He had one of their camera options and I liked what I saw. I initially checked out the site interested in some briefcase options when I was pleasantly surprised to see they offered diaper bags.

After a couple of emails back and forth, they decided to send me one. While the totes and field bags are better for the more Rakish dad in an urban environment, I got pretty excited about the Georgetown Voyager. 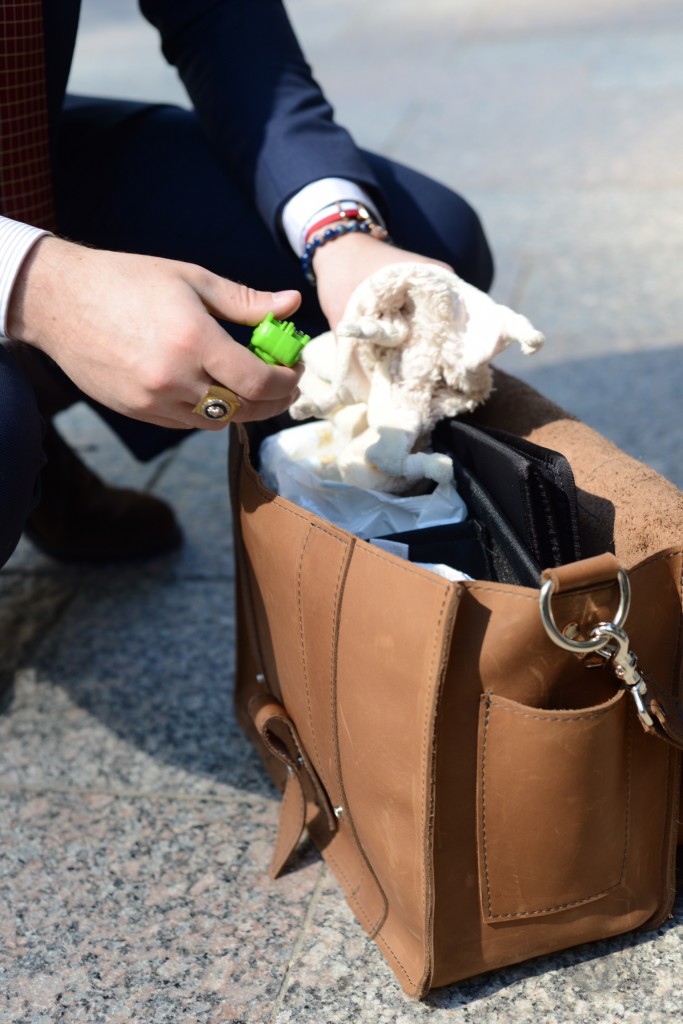 It comes in six different colors of leather with either a leather or cotton shoulder strap. All of the interior details that make it a great diaper bag, like padded, alterable, water-resistant liners are removable. There’s room enough for 20+ diapers and a pack of wipes, toys for the kids, enough for two days plus snacks, extra pockets for bottles and water, interior pockets for things like medicine and treats, and a back flap that will hold a newspaper, magazine, or iPad.

Basically it’s enough to get me and my kids through a weekend without my wife. Once the kids are grown up, all of the diaper-bag-specific options like the lining and changing pad can be removed and it will function great as a camera or messenger bag. So win-win.

I run with a lot of dad’s in my circle and the envy factor is undeniable. Every single one has seen me with it, commented how cool my new messenger was, and then audibly freaked out once I opened it up and showed them it was a diaper bag. None of them had even an inkling of its intended purpose before I showed them the inside – which is exactly what I believe a dad-appropriate diaper bag should do.

It also looks appropriate with everything I wear. From jeans and a T on a Saturday, to a full suit. Since I’m with my kids in my full wardrobe spectrum, this was another mark in Copper River’s favor.

The only thing I would have liked to see that wasn’t included was some sort of insulated pocketing to keep drinks cool. Other than that, this thing has exceeded my expectations.

Add to its look and functionality the fact that its hand-made right here in the US, and I couldn’t be happier with it. Oh, and at $175, it’s as much as your average box-store diaper bag.