As much as music was part of my identity in high school and college, I’ve never been a huge audio guy. I didn’t own any vinyl, and the only lamentation I had about shifting all of my music from CD’s to my phone was that it didn’t play as loudly in my car. I’ve never installed an aftermarket stereo system in a vehicle and my home isn’t equipped with a sub woofer and surround sound. Basically, I’ve been pretty content with anything that comes out of the box.

It should come as no surprise that the same standard applies to my headphones. I’ve been using the standard white earbuds for as long as I’ve had an iPod or iPhone and they’ve done the job just fine. However, when LSTN reached out to me to see if I was interested in reviewing a pair of their headphones, my curiosity piqued and I wanted to see what the world of the audiophile was like. Would a different pair of earbuds really change the way I listened to music?

LSTN makes all of their headphones, both earbuds and over-the-ear options, with reclaimed wood. They source from materials like cherry, beachwood, and ebony. Initially I believed it was purely aesthetic; don’t get me wrong either, the wood looks awesome and makes each pair of earphones unique. However, it serves a practical purpose as well. Wood is used in classical instruments like guitars, drums, and pianos because of the effect it can have on sound. It can increase the warmth and quality of the audio coming through the player.

This opened up an entire new experience for me. I hadn’t realized how tinny and distant my music was until I started to use these headphones. Warmth is really the best word to describe the improved sound. The best comparison I can give is that of firelight vs the fluorescent bulbs lining a Wal Mart. Sure they both provide light, but the light of the fire does more than just that. It feels more natural, more social, and more inviting. The improved sound from these headphones creates a similar effect. I felt more like I was experiencing my music like I would at a live show, as opposed to just passively listening to it. 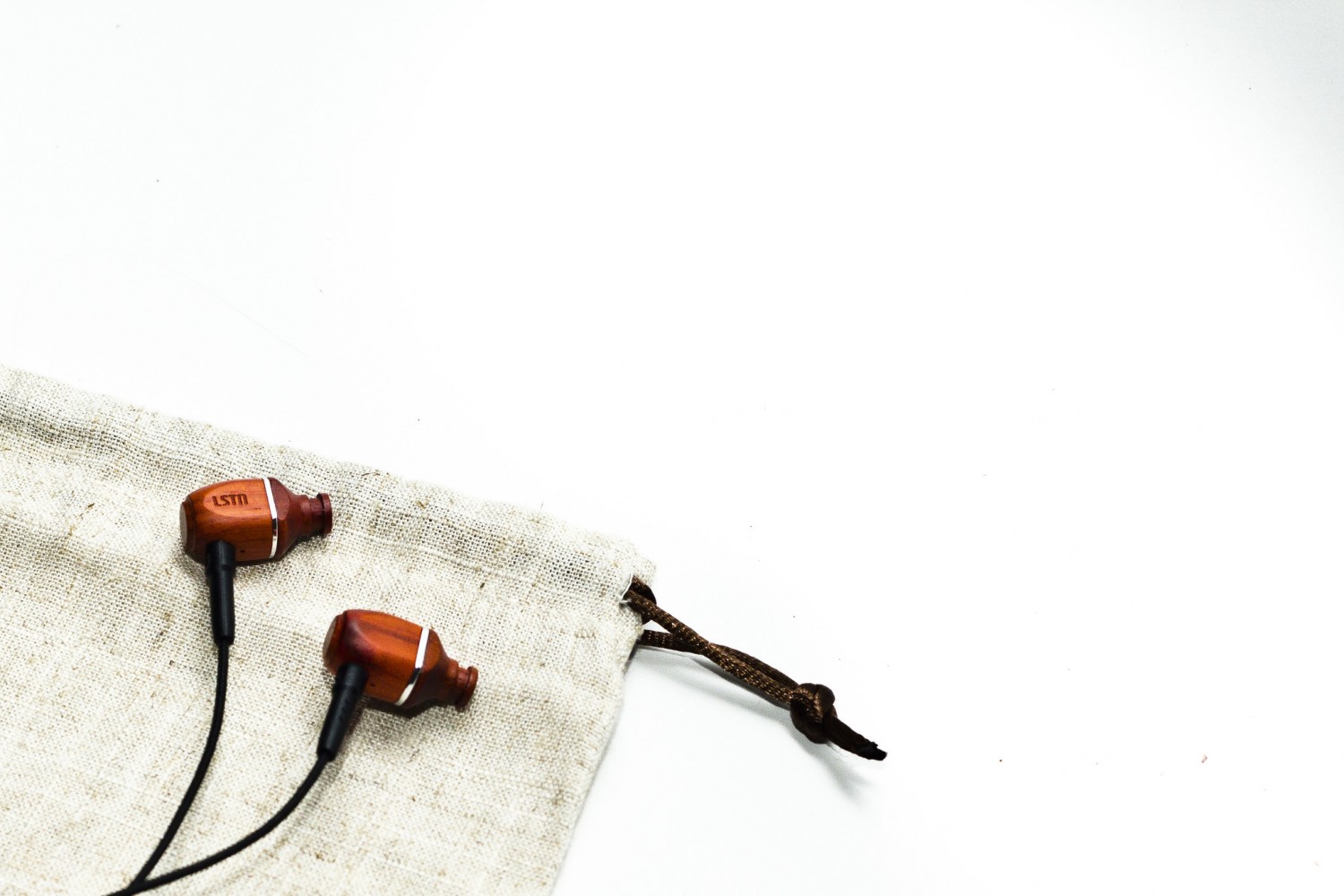 Out of the box, they come with a small, burlap carry bag and different-sized rubber cups. These were a huge benefit to me because apparently I have little-girl ear canals. The standard-size cup they provided was too big and felt extremely tight and uncomfortable, so the foresight in recognizing that people need size variations was a welcome inclusion.

I also am a fan of the no-knot nylon cable. I try to neatly wrap my chords but even the best wrapping can still get caught around other things in my bag or twist up on myself. By using a nylon cable as opposed to the standard earphone wiring LSTN made something that doesn’t tangle, nor does it crease and break. If I do see minor kinks when pulling it out of my briefcase or gym bag, I simply hold one end and run it through my hand all the way to the other, leaving it straight and ready to go. Of course they’re not the only company to do this, but I’m glad it’s part of their process.

The cable comes with an in-line microphone and one-button stop/play control. This is my largest complaint with these earphones because there is no option for volume variation directly on the cable. This is most frustrating in the gym when I have my phone in an armband and the controls on its side aren’t as easily accessible. Even after two months straight of using these, I still miss having the volume control right there on the cable.

The last major difference I noticed between these and my white earbuds, is the passive noise cancellation. I’m still surprised every time I put these on at how little I can hear around me. This is especially helpful at the gym because it helps keep me focused and I can feel like I’m in my own world. While I haven’t had the opportunity to try these on an airplane, I would imagine their cancellation properties are a huge improvement on the standard, white buds in that situation as well.

Aesthetically the Bowerys aren’t much, and it’s too bad. The great cherry wood on mine is hidden by my ears and all that’s visible is the black nylon chord. However, they have some over-the-ear phones that appear refined and well-crafted and would look much more appropriate when worn with a business suit than the brands you see sold at Best Buy or sponsoring snowboard competitions.

All in all, I’d say these are a worthwhile purchase. If they had volume control on the in-line mic they’d be perfect. Even still, at $50 for the Bowerys, they’re not much more expensive than replacing standard-issue headphones and the noise cancellation and sound improvement makes the extra money worth it.