Check out the suits these guys have on. 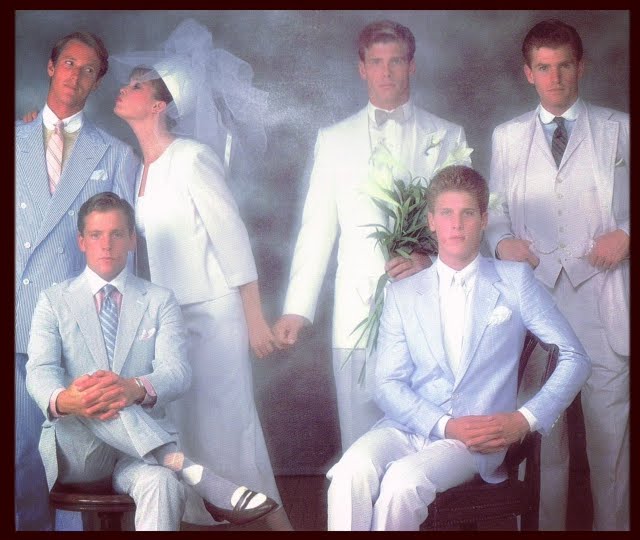 Not only is the one on the left wearing a double-breasted jacket – totally over the top for a casual fabric like seersucker, the one on the right is wearing a three-piece, with a club collar. If you’re going to try to emulate any one of these gents I’d say your best bet is the young one seated on the bottom left. Of course, it may just be that his hair is the one that looks the least 80’s so to my eye he looks better all around. I do like the argyle socks though.

Seersucker suits can’t be taken seriously unless you live in the very smallest of WASP pockets. Either don’t wear them at all, or wear them and know that you’re just having fun with your clothes.

This is part two of a response to an email from a reader.

The second part of R’s question was what type of pants are appropriate for summer, especially a summer in the Mediterranean.

Ideally you want your summer pants to keep you cool. This can be done two different ways – by reflecting sunlight and also by allowing air to flow through onto your legs. There are a few traditional materials that accomplish this very well.

The warmest of these is cotton. Cotton is going to do a lot better than wool, but will restrict more air flow than any other summer weight materials. The upside to cotton is that it holds its shape and resists wrinkles a lot better than seersucker or linen. For most men, a good summer suit will usually be made of cotton. You can purchase these with minimal lining to allow maximum air flow but it doesn’t stand out as much as seersucker or wrinkle as badly as linen does. Cotton is also what you’ll look for if you’re buying a pair of khakis for the summer.  Because cotton is the heavier of these fabrics you want to keep the colors light in order to reflect, rather than absorb, more sunlight. Cotton is also appropriate for Spring and Fall so it’s a good transition material.

The next step up is seersucker. This is a material that was primarily used in the American South and was a staple during summers before air conditioning. It’s trademark pattern is blue on white but it can be seen in many different colors. I even have a suit that’s brown on forest green. Seersucker has a bit of a puckered look so it comes across as more dressed down than cotton but it’s also quite a bit cooler. On top of my suit pants I have a pair of traditional seersucker trousers and I love the things. The general rule is to avoid wearing these before Memorial Day and after Labor Day as they are a specifically summer fabric.

The last material is the coolest and most casual. I would avoid buying a linen suit until you have a few more in your wardrobe. That being said, a pair of linen trousers might be considered a summer staple. Even here in Utah, where I’m miles away from any coast, linen is a life saver in the hot, summer days. Because linen is such a cool fabric, you can get away with wearing it in much darker colors than cotton.

So if I found myself in R’s position, I would avoid seersucker. It’s a uniquely American fabric and will look very out of place on the Mediterranean. I would get one or two pairs of linen pants and have them tailored differently. Another advantage to R and readers like him who have big thighs is that linen pants are typically cut much larger than anything else. They are supposed to be more lose and billowy, so it should be easier to find a pair that fits him in the waist and then can be tailored to fit his thighs and calves accordingly. I would do one pair in the traditional cream color and another that’s either a deep brown or navy. If R plans on spending any time doing business or visiting clubs, I would recommend getting a cotton suit. A tan cotton suit with a white linen shirt unbuttoned a couple of buttons (he could even go three if he wanted), a linen pocket square and espadrilles or loafers with no socks will look as great on the beach on a Friday night as they will over drinks discussing business in Spain.