Back To Blog
The Discipline of Dressing Better
25 February, 2014
Clothing

Last night my wife and I were out to dinner when we got to talking about a few people we know and their appearances. Reading that sentence I realize it sounds gossipy but we were focusing more on why they look the way they do, rather than just poking fun at them.

There are a few women we know who have spent time with my wife shopping, getting their hair done, learning how to do makeup, etc. They ultimately fall back to no makeup, hair in a ponytail, and jeans and a T-shirt. The same goes for some men in our lives. They’re guys I’ve done full, albeit unofficial, consultations with who, after a month or two, still end up coming back to dad jeans and Seinfeld sneakers. 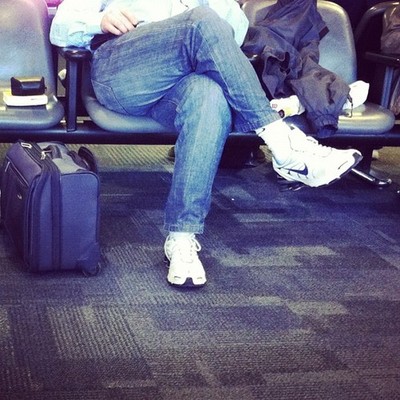 It’s funny because they’ve invested their time, energy, and money into buying pieces for a new wardrobe and yet end up defaulting back to what they know and are familiar with.

We are all creatures of comfort and habit. Whether we’re miserable, happy, enslaved, productive, healthy, or dying, it’s easier for us to remain in our current situation than it is to improve our lot in life.

The easiest and most glaring example of this is in regards to health. Every year people resolve to get in better shape, lose weight, eat less junk, and feel better about themselves.  I have one relative who is suffering from a myriad of “diseases” simply because she treats her body like a garbage disposal and won’t exert any discipline over her diet.

We’re all guilty of it. I was trying to lose belly fat for five years before I really took it seriously enough to make any real progress. Instead it was easy enough to justify where I was because I wasn’t really fat, I had more important things to do with my time than count calories, and my wife still thought I was attractive so it didn’t matter anyway -pretty easy and common rationalizations.

Part of it is that we trick ourselves into believing that half-hearted efforts are a legitimate attempt at improving ourselves. We get the high of feeling and projecting our discipline without really needing to have any self control. We can tell people we’re watching our diet, but if the belly’s still there after three years, are we?

So bringing this back to style, we can get caught up in aesthetic inertia as much as anything else. A man may buy a great pair of chukkas, but still throw on his sneakers. He does it because he’s used to his sneakers and they’re already broken in. Or because the chukkas were more expensive and he doesn’t want them to just be common, every-day shoes. Or because he subconsciously realizes that people will perceive him differently and he doesn’t want the increased responsibility that comes with increased respect. Whatever the reason may be, dressing well is not an easy thing – even after paying the money for the clothing to do so.

It’s not nearly as difficult as exercising, eating better, approaching a girl at a bar, or learning to better control our emotions, but it does still take some mental discipline and fortitude. In our heads it should be just as easy to throw on that pair of chukkas as it is to lace up the old New Balances, but it’s not. We have too much value invested in our appearance to be able to make a change without the effort of discipline.

I’ll say that again for the back row – All men invest enough value in their appearance that making any change will require mental discipline. Even those who claim their style doesn’t matter are really just esteeming themselves as someone who doesn’t care about style. By getting them to admit that they do, their whole paradigm has shifted.

I’ll give you an example from my own life. I’ve worn a shirt and tie, mostly with a suit, almost every day for the last ten years. It’s part of my uniform and I’m just as comfortable in that as I am in my casual clothing. However, one thing I’ve never really spent much time wearing is workout clothing. Even when I was active as a teenager, I wasn’t involved in traditional sports. So gym shorts, sweat-slicking shirts, and gym shoes were a foreign concept for me up until this past year. In fact, when I first started going to the gym, I was wearing Chuck Taylors, old running shorts, and my normal T-shirts.

Once I got proper exercise clothing, I loved wearing it to the gym. I felt a difference in the way I was able lift and work out. It didn’t make me stronger or better, but it did make me more comfortable. That being said, I was self conscious if I had to go anywhere else in my workout clothes. Swinging by the grocery store or stopping off at the bank was uncomfortable for me because I still identify as someone who dresses up. When I stand in line waiting to check out in my running hoodie and cross trainers, I look like half of the other men in the store – and that’s a foreign feeling. My own lack of discipline wanted me to make the ridiculous decision of going home and changing before being seen anywhere besides the gym in my workout gear.

Silly right? Well thankfully it requires less self control than other aspects of self improvement. One of the easiest steps a man can make is to throw out or give away his old clothing. There’s no temptation to put on that baggy, ironic band shirt when it’s sitting in a bin at GoodWill. Just like eating healthier is easier when there’s not junk food in the house, dressing better is easier when the slob uniform has been thrown away.

Much like developing any other good habits, dressing better requires less mental effort the more often it’s done. It’s further proof that learning to do so is an easy investment in improving a man’s life. Once he’s taken the necessary weeks to acclimate to dressing intentionally, it becomes second nature – meaning his will power and discipline can be used on other, more trying improvements.