I had a comment on a post this week asking how ideal the “hourglass” shape is when it comes to tailoring. The answer is the ever-annoying “it depends”

The hourglass shape is something that is currently popular but isn’t necessarily timeless. In the past, men’s suits have been cut a lot more straight (the 60’s) or in more of a V-shape. Currently the hourglass is good on men who have broad shoulders or their shoulders and hips are the same width.

I know I use Olyphant a lot, but he’s a good example of a rugged style. Look at how wide his shoulders are when you compare them to his hips.

If you look at his suit in the picture above, it narrows down to the hips. The only reason it looks to have an hourglass shape is because the jacket is open and he does have hips. It’s not tailored that way.

Daniel Craig has a similar build, but his tailors have given him more of that hourglass shape in his jackets. 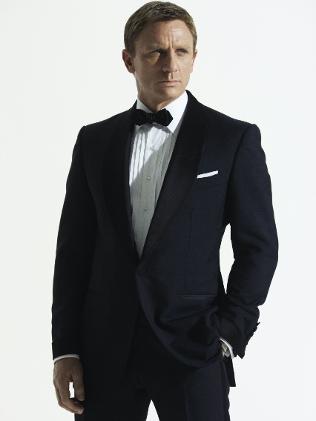 For men with shoulders the same width as their hips, there is no way to add weight to the shoulders themselves without padding them. While this was popular in the 80’s and early 90’s it has fallen out of style for good reason. For most, when they wear overly padded shoulders, it sets off the proportions between face and shoulders. So, you solve one problem but create another. A better workaround for this is to simply have your jackets tailored  in an hourglass shape. This diminishes the visual weight of the body and makes the shoulders appear more broad and the chest bigger – thus making you look more manly.

For men with hips that are wider than shoulders, the desired goal is to hide the size of the hips and build up the weight of the shoulders. This is where minimal padding is still acceptable; especially because the majority of men who are built this way tend to have wider faces as well. The tailoring should be straight up and down as this gives the man a more solid and substantial appearance. While it doesn’t have the ideal V shape, a solid frame is the next best thing and looks better than an inverted V or the 2X4 proportions the skinny man has to deal with.

Seth Rogan is soft and has a belly. Still, he’s done shoots with GQ and can look good in a suit. See how his jacket falls straight down around his hips. You can also tell in this picture that he has some help in the shoulders of the suit.

So, while the hourglass shape on modern suits is obviously very popular right now, it’s not right for everyone. On the wrong man, it will accentuate the wrong things. Know your body type, suit yourself accordingly, and you’ll look solid.