A baseball shirt is something that leans a little younger but still looks on most men in college too. I’d target it to high-school guys though. It has its history in baseball and most clothing that is sports specific comes pre-qualified as masculine. That subconscious visual association between the wearer and an activity that’s consider modern and manly are why so many guys are happy to wear jerseys or even T-shirts with the logo of their favorite teams on them.

The great thing about a baseball T though is that it isn’t as in your face as a basketball jersey and it’s not as tacky as a football T-shirt. It’s an item that straddles the line between form and function very well.

It’s also a shirt that will play to your skin tone and contrast. Have blue eyes? Get one with blue sleeves. Have a very stark contrast? Buy one that’s black and white so it will draw more attention to your face.

The rules of fit follow the same fit principles as a regular T-shirt, except the sleeves will obviously come a quarter length down your forearms and overall body length will be more.

For you guys in high school I’d recommend going to your local sporting goods store and picking one or two up. If you’re wanting to wear one of these in college, I suggest picking up one like the henley version below. 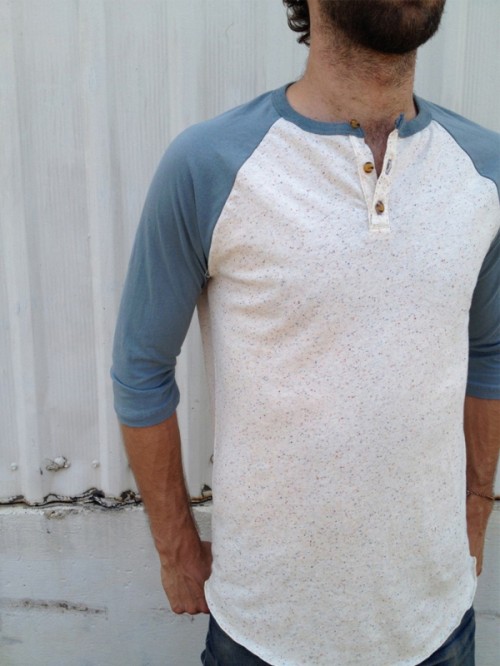 Wear it deliberately like you would a T-shirt and not as a default and it will see some good, functional rotation in your wardrobe.