Within each man there is a scale of two competing masculine traits: Danger and Play. Danger is what comes from a man’s power and self-discipline. It’s his ability to exert force over his environment and others. Play is what comes from a man’s sociability and aloofness. It is his ability to invite others into his frame and to embrace his environment. Both are inherently masculine and all men have an element of both within them.

Some, like a Batman, are more danger than play. They are the lone wolves who either care far more or far less about the rules of society than the average man. They are the men who are slow to smile or vocalize – the men who take what they want and don’t apologize for earning the good things in life. They are the men who build themselves up from nothing and continue to succeed for the sake of success alone. For these men the end can and often does justify the means, so long as it doesn’t violate their own sense of honor and integrity.

Now obviously Batman and Bruce Wayne are one and the same. This same contrast in two types of masculinity has existed for ages. Consider Sir Percy Blakeney/The Scarlet Pimpernel. Neither one of these two types of masculinity is inherently bad or good. Both are appropriate given certain situations and an individual man’s life may lead him to lean more one way than the other. We all fall on varying points in the Danger/Play scale.

So what does this have to do with clothing? Well, a man has to dress his type. A man may be able to have varying degrees of Danger and Play in his personality, but his wardrobe on any given day cannot. One aspect will always overpower the other. Look at this picture from GQ a couple of months ago. It’s from a quick article touting the virtue of bright red pants. Now, I’m obviously a fan of wearing go-to-hell colors, but this is something that won’t work for every man. Notice the guy on the left? He’s wearing a fitted, leather jacket. It’s black and fits like a glove and this is something that would typically fall into the Danger side of men’s style. But when it’s paired with these red pants, all the Danger is sucked out of it. Don’t get me wrong, it can still look good, but you’re not going to roll up to a dive bar like this and expect anyone to take you seriously. If he wore that same jacket with a pair of dark jeans and boots, he’d be solidly in the Danger category and able to convey that aspect of his personality.

Have you ever wondered why it’s always better that a man buy a solid suit before buying anything with patterns? It’s because solids fall into the Danger side of things. There is nothing playful about a man in a sharp business suit, with everything tailored ideally and all items perfectly in place. This is a man who looks like he has important places to go and important things to do. There is no nonsense about him.  There is no Play in James Bond wearing a tuxedo at the Casino Royale.

But even men of supreme seriousness the likes of James Bond and Don Draper have an element of play in the them. When they are in casual or social situations they can show this Play more in their wardrobe. 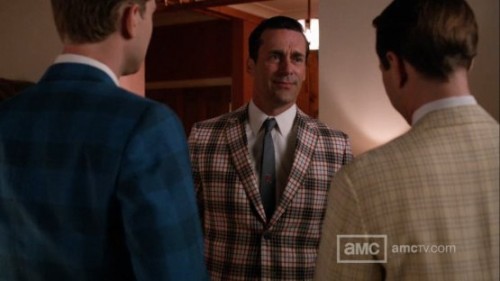 Unfortunately most men think Play is bad, or that Play comes at the expense of Danger. While stylistically you can’t have one without it overpowering the other (Play almost always overpowers Danger) a man himself can have strong elements of both. When it is appropriate to do so, a well-dressed man embraces his Play and brings it out in his style. It’s why the American Preppy style exists. It began with big wigs in very distinguished schools and institutions who had the clout and the Danger to be able to afford the contrast of wearing loud, Playful clothing.

If you’re just starting to dress better, figure out which side you gravitate more towards. It’s always safer to default to Danger (as ironic as that sounds), but that may not be appropriate for some men. If you’re a stand-up comedian, a musician, an artist, or anything else that depends primarily on creativity, you might be better off defaulting to Play. Either way, figure out which way you lean and start building your wardrobe accordingly.

But don’t stop there. Once you’ve established your Danger wardrobe or your Play style, build up the other half as well. It’s just as inappropriate to bring Danger to a Play situation as it is to appear Play in a Danger scenario. Learn to incorporate both and then choose which of the two fits best for each situation.