As per the title, Hair Care is the subject of today’s lesson but it is such a massive area to cover, that in order for me to touch on every topic I want to within it, I’m going to break this section down into two sister articles. We’ll be covering all things facial hair in these first two pieces and everything related to scalp hair in subsequent posts.

As I am sure all of you readers (those not living under rocks at the bottom of the ocean on a distant planet) have noticed over the last few years, Barbering is back with a vengeance, reviving the men’s grooming/shaving industries and subsequently setting in motion the supermassive tidal wave of the Beard & Moustache culture seen everywhere. This sensational upsurge has been [mostly] a positive movement as men everywhere are rediscovering traditions held by their fore-fathers, styles long thought dead, practices all-but-forgotten and much more, but with popularity comes imitation and every Tom, Dick, and Harry have written an op-ed piece on “how to get the best shave”.

Instead of rehashing the same tired nonsense about “the perfect shave”, I will endeavor to explain how a man’s hair works, and what methods of shaving work for what and whom, and then let you make your own decisions.

The average beard contains between 7,000 to 15,000 hairs, as much as the average woman’s legs and underarms combined, and a man will spend about 33 days of his life just removing facial hair. The average beard hair has the same tensile strength of copper wire of the same diameter. From there, hair breaks down into three parts:

Medulla – the innermost shaft of the hair that provides structure, is often missing in lighter colored hair due to a genetic flaw

Cortex – the inner “gooey” mass to the hair where melanin (pigment or in layman’s terms your hair color) is stored alongside moisture.

Cuticle – The outer translucent layer of the hair, keratin cells grow in a similar fashion to overlapping scales and serve to protect the hair by retaining moisture.

Beard and body hair is also known as Androgenic hair, one of the three types of hair alongside Head Hair and Vellus Hair (the peach fuzz everybody has covering their body). It’s called Androgenic hair specifically because it related to the level of androgens (male hormones) in the individual. Due to a normally higher level of androgen, men tend to have more androgenic hair than women. Hair also grows in three different phases:

Anagen Phase – The active growth phase of hair follicles during which the root of the hair is dividing rapidly, adding to the hair shaft. During this phase the hair grows about 1 cm every 28 days. Scalp hair stays in this active phase of growth for 2–7 years while Body hair stays in this active phase for only a few months, which is why it (comparatively) does not grow as long as head hair. The phase length is also determined by one’s genetics which means your body has a pre-determined terminal length to their hair i.e. head hair/body hair will only grow to a certain length before it stops and enters the…

Catagen Phase – a short transitional period for the hair where it becomes fully keratinized, is considered “dead” and converts to a “club” hair which in layman’s terms refers to a hair no longer attached to the internal base shaft that supplies blood and new cells for growth. Once this process is complete the hair enters the….

Telogen Phase – The resting phase for the hair. Basically it is a dead “club” hair that stays on your head until it eventually falls out. Fifty to one-hundred “club” hairs are shed daily from a normal scalp, though in cases of extreme stress on the body as much as 70% of the hair can enter the telogen phase and fall out prematurely.

So you’ve got this incredibly dense forest of constantly growing hair on your face, what do you do with it? For one you can grow it and begin cultivating a beard/moustache. If you’ve never had one, it’s a great test of manhood to grow out a beard and see its potential. Beards can completely alter the perception of a man’s image by other people and can accentuate other features of his face while simultaneously hiding flaws. 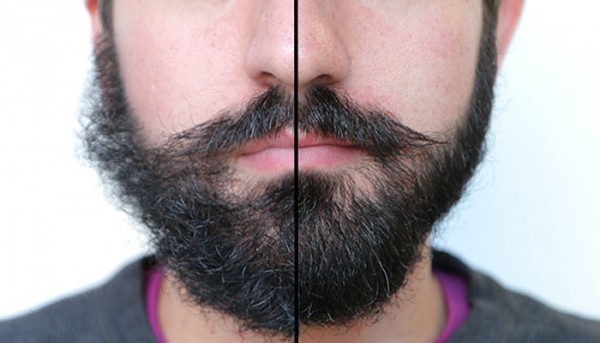 When you first start growing, the most important thing you can do is practice self-restraint by ignoring the urge to trim or shave for at least 4-6 weeks. That way you can get a complete picture of where your hair grows fastest, and where your beard doesn’t quite fill in. This will help with the final product, as you’ll be able to match your beard to your face shape and make your beard, and you, look better.

This is especially important during the first few months of growth as dead skin, food particles, and telogen phase hair can become trapped against the skin exacerbating itchiness. Scrubbing weekly with a beard specific cleanser (you can’t use your everyday shampoo) and patting it dry with a towel is important. Overzealous toweling can lead to frizz and split ends.

Step 3. Learn to train your beard.

The glands at the opening of the hair produce a fatty secretion that lubricates the cuticle. Its complex structure slides as the hair swells and is covered with a single molecular layer of lipid that makes the hair repel water and keeps the cuticle soft, shiny and healthy. That single layer of water-repellent fatty oil can be worn away easily with dry outside temperatures, air pollution, excess touching and much more. Without it, split ends and premature breakage can occur and the beard as a whole can become tough and unruly. To combat that, daily applications of beard oil will condition the hairs promoting softness and manageability. A daily rubdown with a wooden beard comb or animal hair beard brush can actually help [re]distribute your natural oils as well as beard oils, training your hair to grow in desired directions.

You can’t build a house without bricks, and the same applies to facial hair. Your beard is made from protein and fat, but it’s also heavily reliant on Vitamins B5, B3, and B9. That means lean meats, nuts, egg yolks, milk, and plenty of leafy greens. There is a direct correlation between the quality of your diet and the quality of your beard. Avoid junk food (especially sweets) as they can wreak havoc on your beard hair and the skin underneath it. Eat a steak, or a chicken, or a fish, or some peanut butter (go organic as store bought stuff usually has added sugar)…anything with ample protein. Your beard, and the hormones that grow it will benefit from healthy amounts of high quality protein. Hair is basically spent protein. Don’t skimp on fat, either. Just choose healthy fats. Specifically, eat food high in Omega-3 fatty acids. Omega-3s have long been associated with hair and skin growth and its condition, and studies have shown them to be critically important to most functions within the body. Beard growth occurs with repair, and your body does the most repairs during rest, especially during sleep. Plus, testosterone (male hormones, androgenic hair, remember?) production is highest in men during the morning hours in the final sleep cycle. So focus on two sleep points: 1) Getting enough sleep (quantity), and 2) getting good sleep (quality).

“My wife likes me clean shaven!”

I can hear the cries now. Don’t worry my good fellows; shaving doesn’t make you any less masculine than growing a beard. Barber’s can actually be huge hypocrites in this way, in that we always tout the awesomeness of growing a beard but we’re heavily versed in the ways of the straight razor shave. Whether your daily routine involves a badger brush and a razor, or beard oil and a wooden comb they’re both equally awesome. We’ll cover how to properly approach shaving in the next article.