Back To Blog
In Defense of the New Suit Supply Campaign
18 February, 2014
Clothing Musings

If you spend any amount of time in the online world of menswear, you have most likely seen the brouhaha surrounding the newest ad campaign from Suit Supply.

For those of you who aren’t aware, it features well-dressed men in Suit Supply’s newest summer offerings surrounded by half-naked women. The uncensored version is even NSFW (Boobs. Lots of boobs). 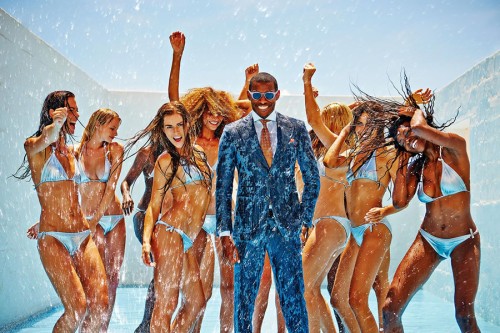 The reactions have ranged from the simple face palm to some serious outrage.

What’s funny is that none of the arguments I’ve heard have a leg to stand on.

And don’t take me wrong, I think it’s a bad campaign. Not bad in the ineffective sense; bad as immoral. But I come at it from the religious standpoint of sex being something that is private and should be treated as such – that displaying it so openly makes light of and cheapens something that should be kept sacred.

I know that most of the world doesn’t think like that though. Rather, we’ve been bombarded with the commodification of sex for years. Instead, it’s bad because of sexism, the male gaze, objectification of women, the perpetuation of male stereotypes or any other secular-humanist, politically-correct, self-contradicting dogma that teaches that sex is no big deal – except when it is.

As many things as this ad is, it’s not sexist. At least, not in the women-are-less-than-men kind of sexism. Instead, it’s a smart play off of the different types of sexual attraction that exist between men and women.*

As much as our Women’s Studies professors tried to convince us otherwise, no man has ever been turned on by a woman’s degree, her career, or her credentials. While those things may build comfort or create a desire for a deeper relationship, the primary thing that turns a man on is how a woman looks. Is she young? In shape? Does she have large hips and breasts with a small waist? How about long hair, clear skin, and a good smile? If so, a man’s sex drive kicks in – plain and simple.

While women are attracted to men who have a good physique, it’s not nearly as much of a factor as a woman’s build is for a man. Instead, her primary attractors are a man’s ability to control the environment around him. His physical, social, financial, emotional, and mental strength are the things that turn a woman on. It’s the reason why young, attractive women end up with bad boys and older millionaires. These men have proven their ability to shape the world to their image.

A good-looking man, who’s in decent shape, and well dressed gives off the impression of success and control. It’s why little meme pictures like this exist: 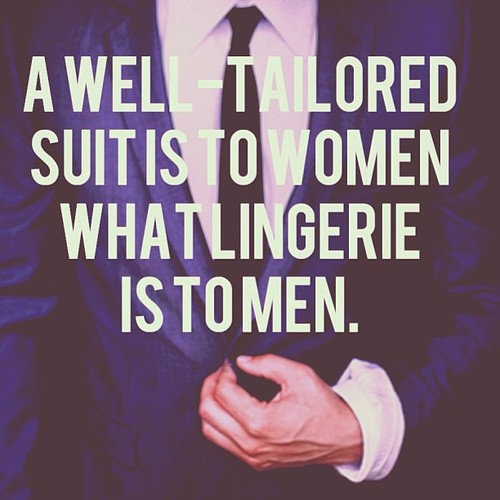 So if these gender equalizers, who are getting their panties all twisted, really had any consistency to their ideology, they’d be just as upset about the objectification of the men as they are of the women.

The idea of being disgusted by sex advertising in a sex-positive culture is nothing but hypocritical. This level of cognitive dissonance is what leads to things like newspeak and thought crime. The models were consenting adults, as were the photographers, the producers, the publishers, and everyone else involved. In order to see the uncensored pictures, a viewer has to consent to them. With consent being the ultimate arbiter of modern integrity, there is nothing morally wrong or offensive about this campaign.

But our society wants to have its cake and eat it too. We want all people to be equal, consenting adults when it suits the narrative and we want everyone (except for straight, white, Christian, middle/upper class males) to be victims when that suits the narrative as well. So what happens?

All of the different social groups jump to play their acceptable roles. Women, minorities, and the non straight or cis-gendered all do everything they can to claim their feelings were hurt the most by the insensitivity of the campaign. At the same time, straight men everywhere clamor as loudly as possible that they too find it to be a violation of their good taste and that advertising like this is bad because (insert feminist/modernist/humanist argument here).

The greatest irony in all of this is that most of the guys who are ardently denouncing this campaign as sexist, backwards, and misogynistic are the same men who are fapping to these photos and more the same night. They’re the same men who take on the persona of the “nice guy” with the hopes of it endearing them to more women, thereby making it possible for them to see these women naked.

To these guys and the rest of the West, an unapologetic and overt sexual appetite is not offensive because sex should be private and sacred, but because it’s a uniquely masculine way of approaching the topic – making it evil.

And that’s the real crux of the disgust with this campaign. It’s not outrage at the fact that women are naked. It’s outrage that there are people who don’t play the sexually passive-aggressive martyr that these nice guys and their feminist enablers believe all men should be. It’s in your face, blatant, and aggressive.

There’s no nuance to it, and nuance is the only tool most SWPL’s have in their belt. There’s a time and a place for subtly, but it’s the only means of communication for a coward. There’s no risk in subtly, there’s no courage in nuance. When everything can be explained away as inference or implication, it takes all accountability and all masculinity out of communication.

This campaign is as blunt as a Michael Bay movie – and it’s working. It has worked for Suit Supply for three different campaigns now and they continue to grow. Very few menswear stores are opening as many locations as rapidly and with as much hype as Suit Supply. They’re cashing in on all of this outrage and leaving the complainers red in the face.

*Yes I’m speaking in generalities. I’m sure you, someone you know, or someone you’ve heard of is an exception to the rule. Big deal, most generalities tend to exist for a reason and they’re worth looking at as a trend as opposed to a destiny.