One of, if not the most important aspect of dressing well is having the confidence to do so. If you’re not sure about your clothing it’s pretty apparent and it makes you look like a clown. But when you see someone with supreme confidence in their style, it makes even the silliest thing look great. Case in point from the Sartorialist. 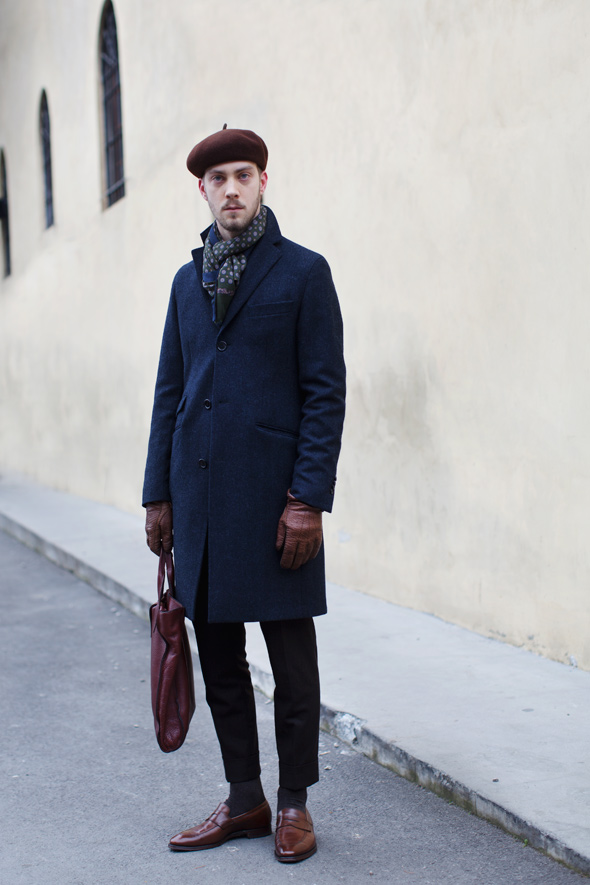 Look at what stands out about the clothes themselves. The most obvious is the beret. There’s very little that is as effeminate and pretentious as a beret. Same goes for how high is pants are hemmed. Calling them floods is an understatement. And don’t forget the bag that’s essentially a purse. 98 out of 100 men who tried to pull that off would look like they were obediently carrying their girl’s bag for her. Individually those pieces are brazen to the point of buffoonery. Collectively they look like something out of the costume closet at the community theater.

But look at the man wearing them. His posture is firm without being stiff. He’s not afraid to take up space and doesn’t comfort himself by keeping his hands in his pockets or folded at his chest. He’s staring you down and the look on his face is daring you to tell him he looks ridiculous. And because of the man and the way he wears these clothes, he looks genuine, masculine and confident instead of foppish.

I’m sure you’ve all heard the saying that clothes make the man, but really it’s the man who makes the clothes.