Back To Blog
What Is a Spring/Summer Suit
8 April, 2014
Clothing

Some parts of the States will argue with me, but we are moving into warmer weather. It’s supposed to reach the mid 70’s in Salt Lake today and I couldn’t be happier about it.

For most men, the transition from colder months to warmer is pretty easy, at least when it comes to casual clothing. The poorly dressed have already donned their cargo shorts and flip-flops and won’t abandon them until the holiday season. The better-dressed have swapped out their winter coats for spring-appropriate jackets or layers, and many are starting to go sockless.

Thankfully, the changing wardrobe is not just limited to casual options. A man’s suits and business-casual attire can fluctuate with the seasons as well. While an all-season suit is the most versatile, there’s something much more comfortable and appropriate about having one or two dressed-up items that are only worn during particular times of the year.

To the untrained eye, it can be tough to tell the difference between and all season, spring/summer, and fall/winter suit. So today I’ll break down what to look for while suiting up for the longer, warmer days ahead.

If made and worn correctly, a suit and button-up shirt can make a man cooler than if he were out in shorts and a tank top. Take for example, the traditional clothing of men in desert environments. They are covered from head to toe in lightweight materials that allow maximum breathability, create pockets of cool air, reflect the sun’s heat, and keep the man wearing them comfortable. 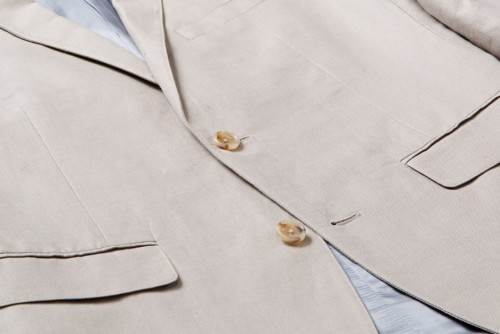 The cloth from which a suit is made has a huge impact on how comfortable it is in different seasons. Certain materials and weaves are better for trapping in body heat and keeping the wearer warm, while others afford more breathability – optimizing airflow and allowing body heat to escape.

Obviously for spring and summer the focus should be on breathability over heat retention. The two cloths best for this are cotton and linen.

Both are breathable materials that allow warm air to leave the body and cool air to pass through. Linen is typically the more breathable of the two and is optimal for summer whereas cotton has more variability between the two seasons.

While the makeup of a cloth is important, its weight is as well. Cotton is a great example of how varying weights can create different effects. Spending a May afternoon in a seersucker jacket and then again in one made of corduroy is going to create vastly different comfort effects. The former will keep a man nice and cool, while the latter will have him sweating himself silly.

The same can be said of wool. Few people know there are light and tropical-weight wools that are created specifically for warmer seasons and environments.

The canvas is the interior layer between a jacket’s main body and the lining. Cheaper suits are made without a canvas and through a process called fusing. More expensive jackets are made with a full canvas that covers the entire front and sides of the jacket from the collar down.

While a full canvas is a great option for increasing the structure and drape of a jacket, the extra material is an additional layer that can trap air and heat. Spring and summer jackets are more comfortable (and formal) if made with  a half canvas or more comfortable (and casual) if made unstructured. Leave the full canvas for the cooler months and the all-season suits.

Choosing a lightweight material with little or no structure is pointless if all breathability stops at the lining. The industry standard for a jacket’s lining is Bemberg Rayon, a synthetic, polyester-like material. While it has its benefits and is the go-to for a reason, its primary drawback is how much it restricts airflow.

It is pointless to choose a cloth with maximum breathability if that airflow is stopped by the interior lining. When looking for a seasonally appropriate jacket or suit, it is better to opt for one that is either unlined or half lined. 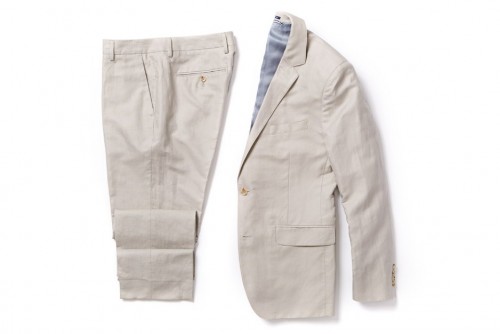 Most of us learned in our middle school science classes about the way different colors respond to the rays of the sun. Darker shades like charcoals and blacks will absorb the sun’s heat while lighter colors like cream and white will reflect it.

This does not mean it’s inappropriate to wear black, charcoal, or navy between now and September, just that it could potential be less comfortable. When planning on making a purchase of a new suit or sportcoat, it’s best to weigh the garment’s versatility and formality against its comfort. A cream suit may be more comfortable, but it’s also going to appear more casual.

While formality does need to be considered, the world of suits and sportcoats tends to dial down its seriousness a degree or two during the warmer months.  The cream suit mentioned above may not be appropriate for a board meeting but will be just fine for a Tuesday at the office.

The lower level of expected formality is also advantageous with spring and summer-weight cloths. Linen and cotton are both much more prone to wrinkle than a heavy wool, as are unstructured and unlined jackets. Rather than chaffing at the wrinkles, many men choose to embrace them and the attitude that comes with longer days and warmer weather.

While I always recommend custom if possible, I acknowledge that there are plenty of men who can’t or don’t want to spend more than a month’s worth of rent on a suit or sportcoat. There are plenty of off-the-rack options that can fit the bill and one that recently caught my eye is a new offering from Bonobos. 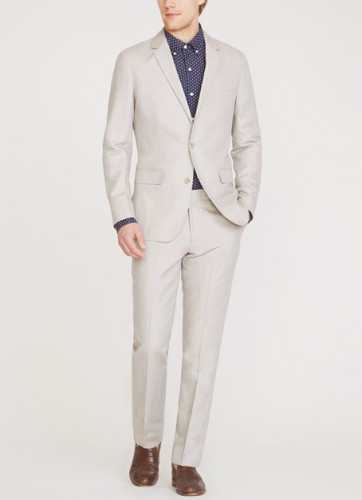 According to the company, the new Foundation cotton/linen suits are made with a half canvas, half lining, and Irish linen. They are simple and straightforward enough to be great as business suits but also casual enough to be worn as separates. I can’t vouch for the quality as I’ve never worn one, but the $450 price tag should make them appealing to the cost-conscious man who doesn’t want to skimp out on quality.