Back To Blog
Custom Suiting with Indochino: Part 2
20 September, 2012
Clothing

Continued from Part I.

My suit showed up on Monday while I was at work. It was three weeks to the day from when I ordered so a point to Indochino right there. They delivered when they said they would.

To be fully honest, I was a little worried before it arrived. After my initial post about the measurement process I did some digging on the Male Fashion Advice subreddit and Style Forum to see the experience other men had had with Indochino. Unfortunately, a lot of it was pretty negative. There were posts with pictures showing suits that were way too tight or way too baggy. Some where the sleeve pitch was so bad it looked like it needed a rotation of about 45 degrees just to sit without bunching. The general consensus was that it was a given you would need to send a suit back for major revisions because the first attempt would always come up short. The more I thought about it, the more I questioned whether this was going to be a good company I could recommend to you guys and I was definitely curious to see if my experience would be the same as others.

I got home from work on Monday to see a massive box sitting on my kitchen table. The bottom corner looked like it had been beat up in transit but thankfully there wasn’t any damage as it was just soft-goods that had been sent to me. 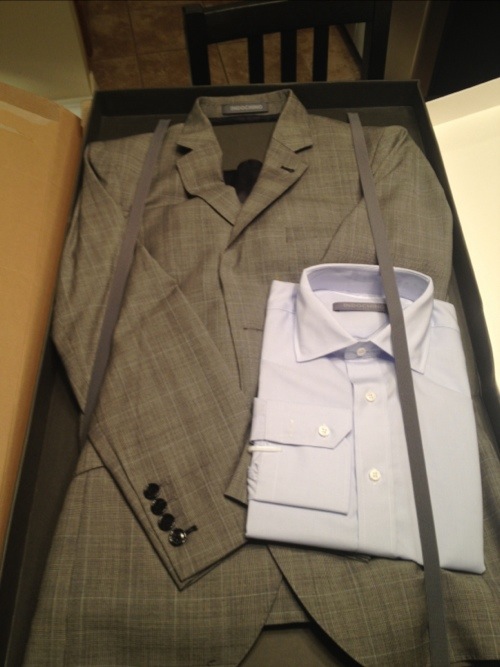 When I first opened the box I was pleasantly surprised by what I saw. I ordered the Essential Prince of Wales suit and the pattern that showed up was even better than how it looked online. It was a lot more bold than it appeared on the site itself and I was happy to see that. I have a few solid suits and was ready to branch out to something else. The other thing that surprised me was how light the material is. I was expecting a heavier-weight wool but this is light enough to be worn comfortably in the summer, which means it’s definitely not a winter suit. This is my first minor problem with the experience. I don’t expect Indochino to offer different weights in the same pattern, but I would have liked to have the weight listed somewhere on the initial page of the suit. This is information they would be happy to give over the phone or via email, but most guys won’t think to ask this on their own, so a little heads up would go a long way.

The other problem I noticed right off was the inclusion of black buttons. I’m definitely more of a fan of brown than black, and I didn’t even think to ask about button color when I was placing my order. I know if I didn’t think to ask for it, the average guy won’t as well. It’s another choice that would have been nice in the customization menu.

So, after taking the time to look it over, it was time to throw her on. This is wear I was expecting to see some major problems. Thankfully, I was pleasantly surprised. 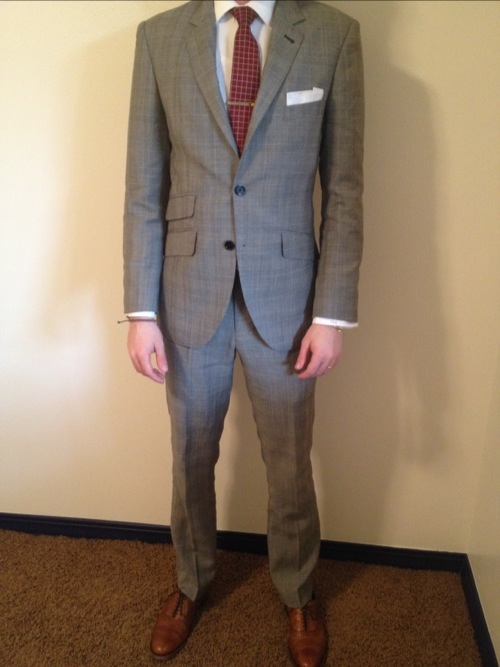 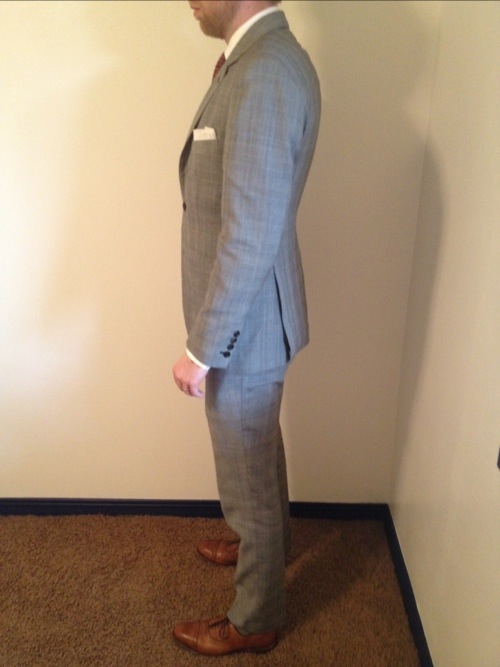 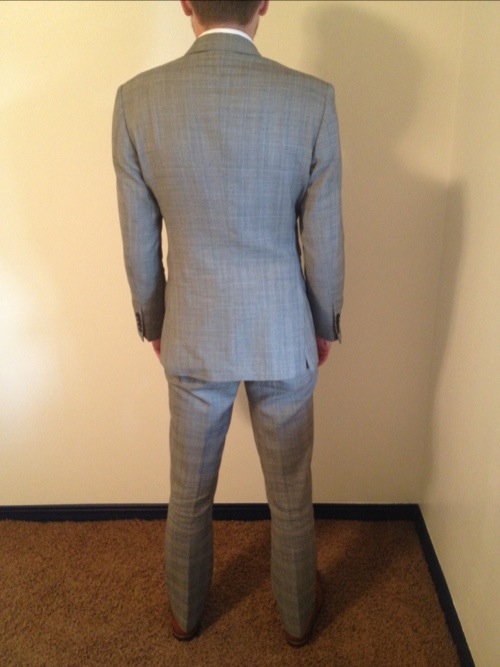 The first thing I put on were the pants. The length was perfect with no break, just like I measured and asked for. The waist fit me well enough that I can wear them without a belt, even though I keep things like my wallet and a pocket knife in my pockets all the time. Even the crotch and the seat fit according to the measurements. There was no bunching or pulling and it didn’t look like I’d accidentally dropped a load off either.

With the pants on and fitting as well as they were, I was anxious to see if the jacket was as good. While it wasn’t perfect, it was still a whole lot better than I expected. My own opinion of the majority of pictures I’ve seen from Indochino is that the jackets are too short and the button stance is too high. The jacket length is an actual measurement that they have you take so I was willing to chalk it up to the buyers’ preference. The button stance however, was not a customizable option. Thankfully, mine ended up sitting exactly where I want it. They kept it proportional with the length of the jacket so it gave me a lower overall button stance. Although they ended up getting it correct for me, this is another option that would be nice to specify. Certain men need an even lower button stance to flatter their build and this is not an alteration a tailor can make.

I personally did have one problem with the button stance on my jacket – and thankfully it’s one a tailor can alter. The top button and the button hole don’t line up evenly. This means the left side of my jacket puckers out a bit when I have it buttoned up because the button on the right is higher than the hole on the left.

Like I said, this is an easy adjustment for a tailor and Indochino plans for these things by giving you a $75 tailoring credit so you don’t have to pay out-of-pocket or ship it back to them to correct simple mistakes.

The shoulders were a great fit, the jacket length and sleeve length were spot on with my measurements, the width of the jacket was slim without being constricting – really, nearly everything was done exactly as I measured.

The thing I like about these guys is they appear to really listen to their customer’s complaints and then adjust things to prevent those same mistakes from happening again in the future. A great example of this is the jacket armholes. Amongst the men at Style Forum, this was the most common complaint. The armholes were too low. This is a terrible look because it makes your entire jacket move when your move your arms. It also gives the appearance of your arms sprouting out of your chest rather than branching naturally from your shoulders. When I placed my order, I didn’t make any arm-hole specifications because this was not listed in any measurement or customization options. Before even making my order I expected to have to return it with a request to have the armholes readjusted. Thankfully, the men at Indochino have heard this complaint and have now defaulted to a higher arm stance. It may not be high enough for some men, but it’s certainly a step in the right direction.

Unfortunately, I did have a couple problems that are going to require I send it back for an adjustment. The first and worst is the position of the breast pocket. For some reason, mine is about two inches too low and two inches too far to the left. It practically sits in my armpit. The angle of it is also a problem with my angled jacket pockets. They counter each other so I’m going to ask them to flatten the breast pocket along with placing it in the proper place. This is a mistake that shouldn’t be made and unfortunately can’t be altered by a tailor so it will require me to send the jacket back. There’s a point in Indochino’s favor for being willing to pay the return shipping and correct this error for free. However, the down side is that I still won’t be able to have this suit in my rotation for another three weeks.

The other problem that needs correction is the button stance on the jacket sleeves. I asked for surgeon (working) sleeve buttons. They do the job but the alignment is off. 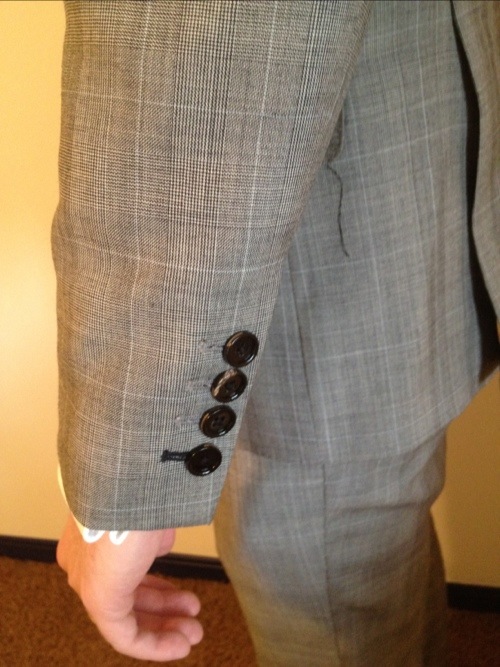 Again, this is another mistake that shouldn’t be made and is most likely attributable to quick or lazy workmanship on the part of the tailor. It’s small enough I could and would live with it if I weren’t already sending the jacket back, but I’m going to have them fix it for me while it’s there.

On top of the suit, Indochino hooked me up with one of their Essential Dress Shirts. Getting the measurements done as part of the ordering process almost felt like an afterthought after how thorough everything was for the suit fitting, but the product itself certainly doesn’t wear like an afterthought.

My initial impression of the weight of the shirt was the same as the suit – it’s a lighter material than I expected. I’ll be curious to see how well it holds up over the next few months as $80 would be a high price to pay for a thin, poor-quality shirt. Hopefully that’s not the case as the fit is great. 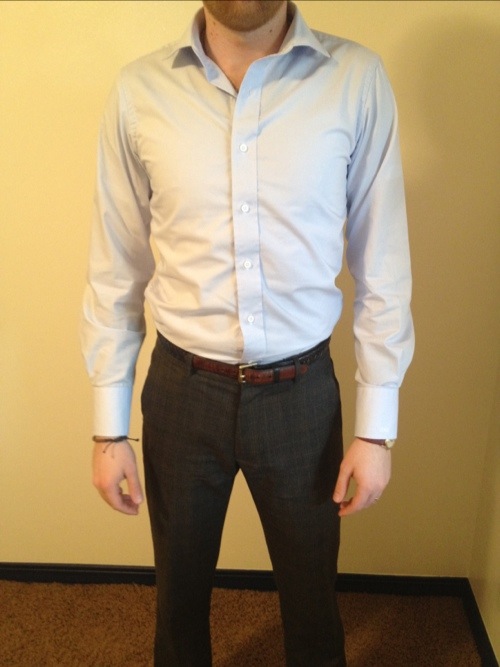 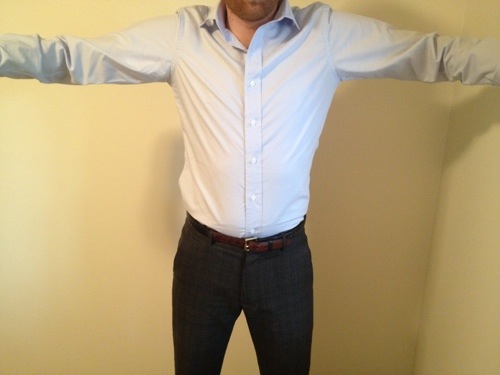 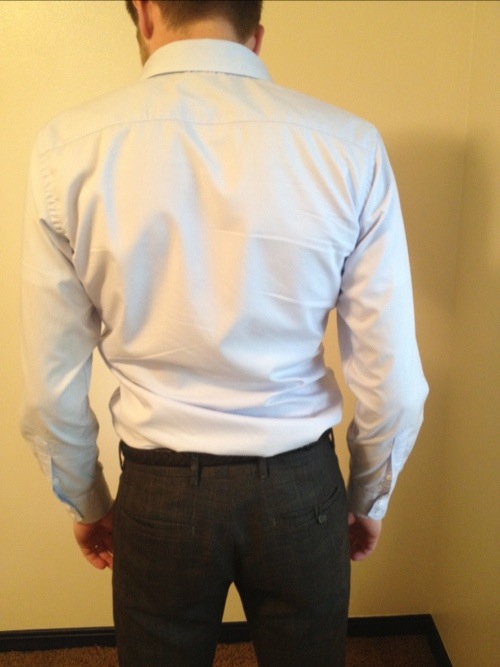 When I walked out with it on my wife rolled her eyes and said, “Great, you’re never going to buy a non-custom shirt again.” The quality of the fit that existed in the jacket is just as present in the shirt. The body fits me well in the shoulders, chest, and stomach. The sleeve length is exactly where it needs to be and their circumference is perfect. Even the armholes are nice and high. The fit practically announces that it’s a custom shirt and I’m going to have a hard time wearing my off-the-rack options once I get used to this.

All in all, the product I received was much better than what I expected. Even some of the things I’ve included in my wish list (custom buttons, fabric weight specifications) are minor. There were a few mistakes that shouldn’t have been made but it’s cool to buy from a company who is willing to see that and correct it on their dime. The thing you need to remember is that this suit is still under $400 and the shirt is under $100. This still puts things on the low-end as far as prices go so to have things fit as well as they do and be as customizable as they are is a good deal.

Along with that quality is the overall look. I will get a compliment or two per day about dressing well but I wore this thing to work on Tuesday and had people complimenting me all day long. I can attribute part of that to the confidence that comes from wearing a custom suit and most of it to the suit itself.

In a few months I’ll do my third and final post giving a follow-up on the material and manufacturing quality. My stance may change by that point but for now I am happy to recommend Indochino and their products to you guys and will be including them