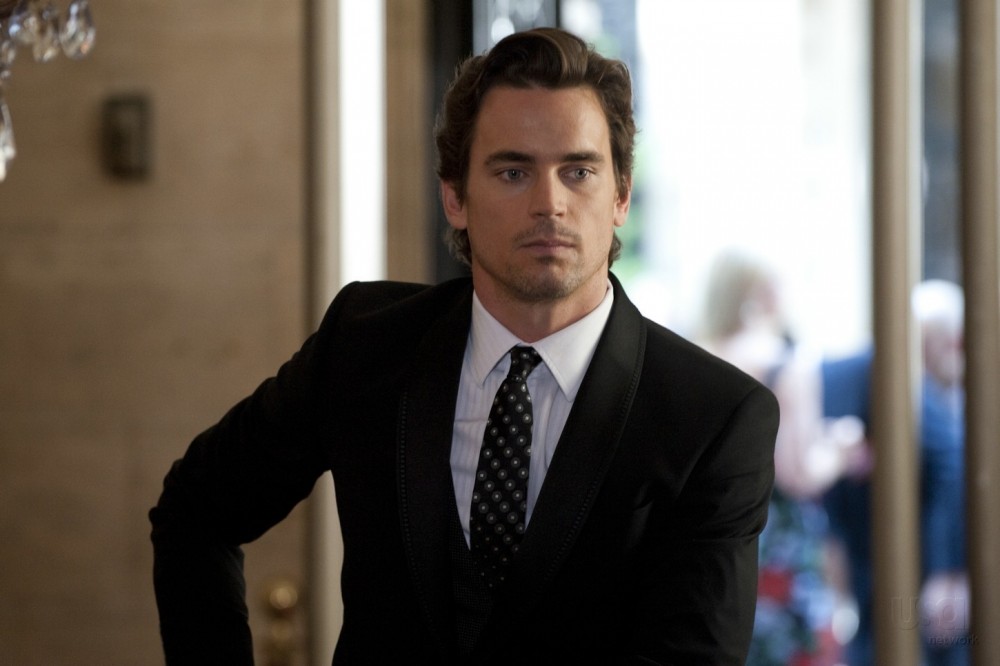 Back in the fledgling days of this site I wrote a post about positive portrayals of masculinity on TV. One of the shows I addressed in that article was USA’s White Collar.

I’ve kept pace with the show since then and still enjoy watching each episode. The relationship between con man Neal and his FBI handler Peter Burke is a great example of how men interact with each other and learn to develop strong bonds of trust and friendship.

But today’s post isn’t about the show itself so much as Neal’s style. More often than any other example, I have clients tell me they want to dress and look like Caffrey. The tough part is that he’s decked out in designer suits and gear from head to toe. Thankfully, there’s a way to do it (relatively) on the cheap.

It really is all about the suit. Caffrey has a classic Rat-Pack look to him and thankfully it’s attainable with affordable suit options. Whether you buy off-the-rack and take it to a tailor or go the custom route via companies such as Beckett & Robb or Indochino, the key (as always) is getting the right fit. However, the right fit for a Caffrey look is slim to the point of skinny. Narrow lapels; two-button, single-breasted jackets; three-piece suits; minimal trouser break; and dual vents in the jackets are all crucial if you want the classy con man’s style.

Unlike the rest of his wardrobe, the everyman can actually afford to buy the shirts used for Caffrey on set. Thomas Pink sponsors the show and their shirts come in just above $100. They’re not as cheap as lower-end stores at the mall but you pay for the quality you can’t get with a bargain shirt. Go with the super-slim fit. It’s rare to see Caffrey in a plain white shirt and he has a stark contrast and cool complexion. If you pay attention to the show, the colors they select for him always work with both his coloring and contrast. This is where you’ll need to change it up to flatter your own contrast type if you want to look as sharp as he does. Contrast collars, bold colors, multiple patterns, and small collars that work with his slim ties and lapels are what keep the shirts always looking great.

Being a skinny guy I’m a fan of narrow ties – but Caffrey takes them beyond narrow and into skinny territory. This was very popular a few years ago with the resurgence of Mad Men and has waned a bit since. However, it’s crucial to nailing this look – especially because Caffrey’s style is rooted in the icons of the 60’s. On top of the size of the tie itself, the patterns are important. Keeping with the slimness of the rest of his ensemble, all the patterns in his ties are small – be it microprint checks, polka dots, or thin rep stripes. Keep it between two and three inches in width and make sure you pick up a tie bar or two. The show uses a lot of vintage finds for their bars and it’s been my recommendation as well. However, there are plenty of places that will throw in a tie bar along with your skinny ties to give you the whole look.

Caffrey is rarely without a square. He keeps his linen squares folded in the traditional “TV fold” and has a bit more nonchalance with his silk squares. Either way, it’s a guarantee that you’ll see a square when he’s wearing a suit. The key here is to stick with solid colors if you’re wearing a patterned shirt and tie. You can venture into patterned squares if you’re solid in either your shirt or tie as you don’t want too many competing patterns in a look. General rule is two patterns and the rest should be solids. Get your squares when you order your ties from the Tie Bar.

While I’m a fan of browns for my dress shoes, a Rat-Pack look is all black. Along with being black you want something simple. Any broguing or wing tips will need to be minimal and the simpler you can get your shoes the better. Keep them shined as well, everything about Caffrey’s appearance is clean and refined so no roughness or distressing. You can go cheap from somewhere like Aldo but you’ll be sacrificing some serious quality. I recommend Allen Edmonds like those above.

Aw yes, the hat. There’s no way to pull off a fedora discreetly. In our current day and age a traditional hat (especially on a young guy) is some serious peacocking. You have to embrace the fact that you’ll be getting negative comments and compliments about your hat from everyone you come into contact with. It’s tough to wear, but it’s also the only way to cap off (pun intended) the Caffrey image. $20 for something cheap from somewhere like Target or Forever 21 or you can pay a bit more for a quality hat from Nordstrom.

Let’s be honest here. As great as Caffrey’s style is, the real reason he’s so compelling is because of his charisma and confidence. He’s more than just an empty mannequin off of which his suits effortlessly hang. His style is routed in who he is as a man. If you want to learn more about how masculinity ties in with clothing, and how Caffrey is more than just his great suits, sign up for the newsletter.