If you spend any time perusing sites like Tumblr, Reddit, and menswear blogs, you’re probably well aware of the current trend of wearing camo. I had an individual request how to pull it off and decided a post would be better than just a personal response because there might be others who are interested in doing so too.

The first thing to understand about wearing camo is that it’s a trend – which is kind of ironic, considering it is a method of visual communication that has been in the animal kingdom since the beginning of time. However, as universal as it is in the predator/prey world, in the realm of men’s clothing it falls into the same category as things like stacked bracelets, no socks, and high button stances on jackets. They take a man out of the realm of timeless style and into the world of fashion. This isn’t necessarily a bad thing, but something needs to be understood before taking it on. Wearing a camo tie to the office on Friday is very different than sporting one at your wedding. Trends and fashion can be used to a man’s advantage but only when embraced appropriately.

Second, camo is not for beginners. It can create serious levels of contrast, making it something that must be worn deliberately and conscientiously. The trick is to find the correct balance between consistency and contrast. 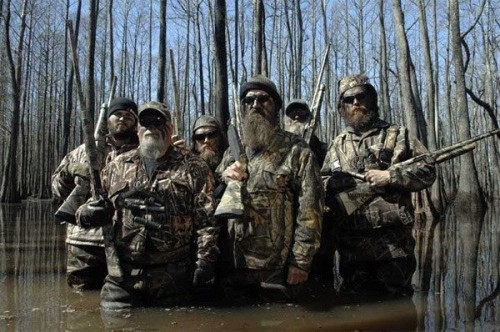 If worn too consistently, it becomes the uniform of the militia man, those who stock up and pray for the impending zombie apocalypse so they can go back to living off the land and defending their tribe. Other subsets of these men are rednecks, hunters, and additional Rugged types. 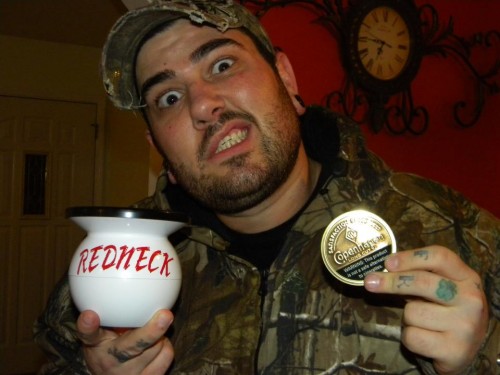 Too much consistent camo communicates a removal from modern society and the inability to function within its parameters. Some men will declare this a vice while others will tout it as a virtue. Either way, it can become a costume and make it difficult to work effectively with other men who don’t feel the same way about modernity. 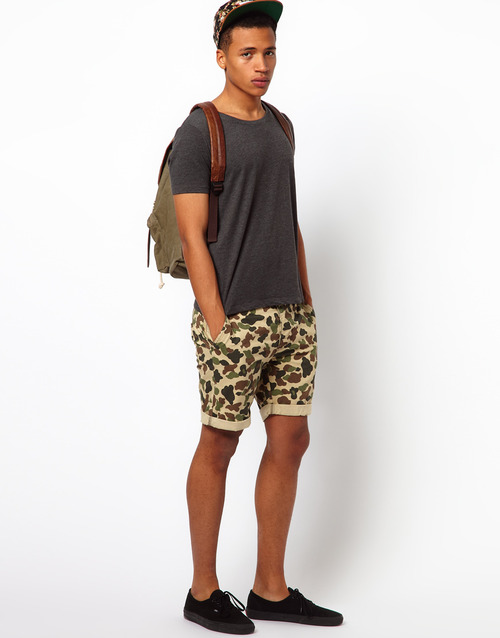 On the other end of the spectrum is too much contrast. Camo is rooted in war and violence. It’s a way for us to hide ourselves so we can hurt and kill other animals and people. On a subconscious level, we all understand that and associate camouflage with toughness, strength, and violence. 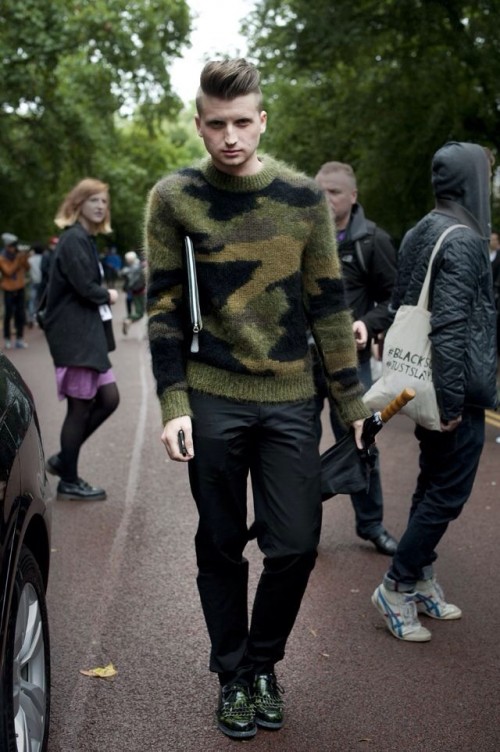 When it’s worn by men who, through their physique, body language, tone of voice, mannerisms, and overall aesthetics, communicate no ability to do violence, the contrast is too strong. It takes any aspect of effeminacy or frailty and brings it to the fore. Younger, skinny guys may like what’s communicated, but most men have no interest in handicapping themselves to this extent.

From the perspective of the three style archetypes, camo is all Rake. Trying to wear it with a Rugged aesthetic falls too far into the above-mentioned consistency trap. Because of its rugged and violence-based origins, there’s no way to wear it as part of a Refined, subtle aesthetic either. Its ability to nod to some aspects of raw masculinity while still keeping everything in check falls in line perfectly with the Rakish man.

Once a man understands the implications of camo (and whether or not it meets his goals), he can start to learn how to wear it. 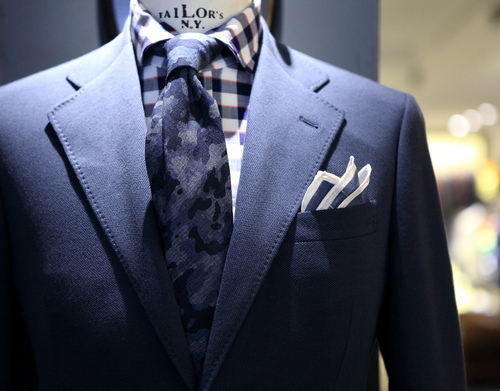 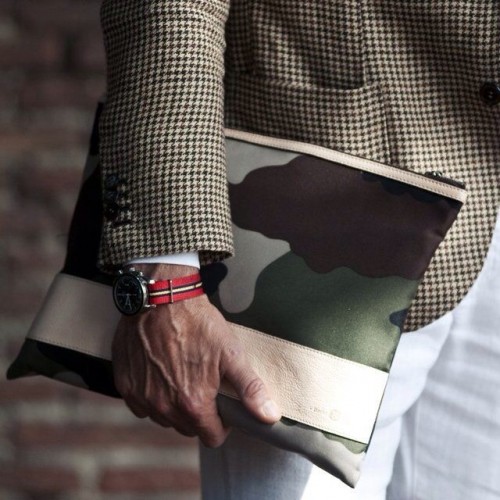 The easiest and safest approach is to start small. Items like socks, ties, bags, watch straps, wallets, suit linings, and other small or seldom-seen items allow for a peek of the pattern without drawing too much attention. 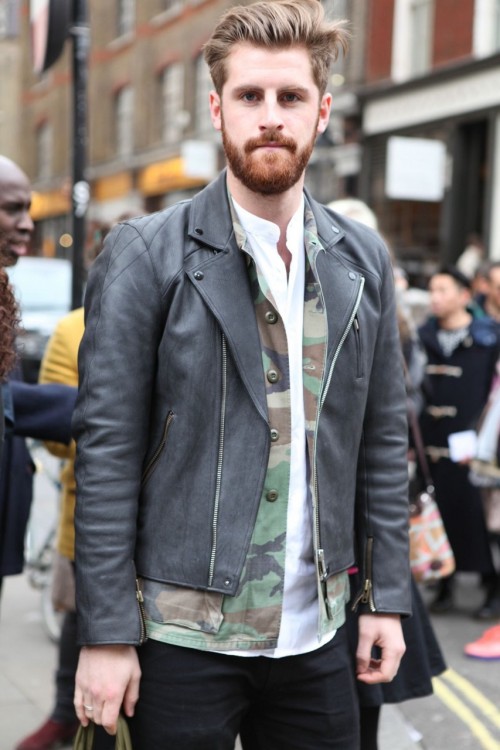 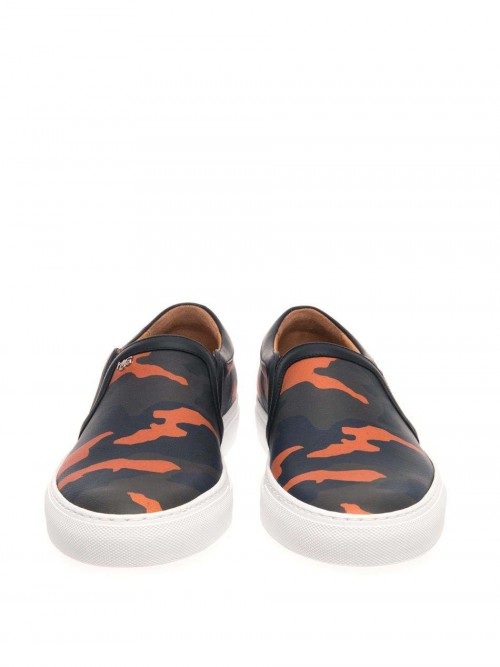 From there it can be worn in larger chunks, either as layers or in more casual environments. An old military shirt under a jacket, a pair of chinos, or casual field jacket are all good ways of keeping it casual while still announcing an embrace of the trend. 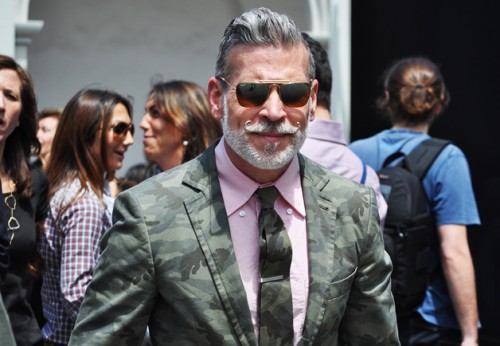 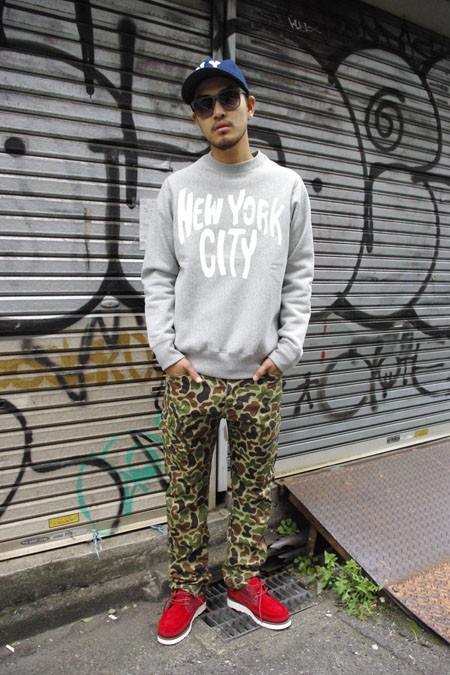 Lastly, it is found on men written about on style blogs, and forums; those who have their photos taken in cities like New York and Florence, men whose style is defined by their ability to wear fashions and trends to the extreme. In these scenarios it can be worn in almost any way possible, from the dandies of Pitti Uomo to the Supreme/Jordan-wearing street styles of inner cities. Items like suits, coats, blazers, dress shoes, flat-brimmed caps, and other high-contrast pieces will get attention, and it will be positive.

Just as it is with any other aspect of style, the man considering wearing camo should evaluate whether or not it will help him meet his goals, regardless of whether or not he likes it. A camo tie may be the coolest thing in the world, but wearing one to a performance review at a white-collar job is probably not a great idea. However, if he’s looking for a way to stand out from the crowd of well-dressed men, it’s an attention getter that could pay off.