Over the last couple of years there has been one man in the UFC who has changed the viability and mainstream appeal of the entire sport – Connor McGregor.

McGregor is a polarizing figure. His attitude, appearance, origin story, and accomplishments all make him larger than life, and it has become impossible for anyone involved in the world of Mixed Martial Arts to ignore him or write him off.

Like all big characters, McGregor is both loved and hated by millions – there are few who are “neutral” in their opinion of him.

And, while most of it is attributable to his record in the ring, his attitude towards other fighters, his quick wit, bravado, and confidence, a large part of what makes McGregor so entertaining is his aesthetic.

So today, I’m going to break down the key elements of his appearance and explain why they contribute to his overall brand and meteoric rise.

Not coming from money and having lived a very blue-collar lifestyle, McGregor typifies the old identity of New Money

and he’s never shied away from showing that off.

Whether he’s bragging about prize purses in the middle of the ring, driving cars that cost double the average mortgage, staying in homes that could house a small army, or sporting wrist wear available to only the most exclusive buyers, McGregor is always showing off his wealth.

He knows he’s earned it. He didn’t have it before. And he has no pretenses about anything in the realm of inconspicuous consumption.

The contrast between the fame and fortune he experiences now, vs the worse-than-average life he had before leads to a unique relationship with wealth.

Had he amassed a fortune slowly, over a ten-year period, he may be more modest in how he flaunts his wealth.

But it’s all part of the psychological game he plays with his opponents and with himself.

By consuming so much he’s signaling that he’s on top of the world – not just the fighting world either – the ENTIRE world.

McGregor now falls within the top 1% of 1% and he wants everyone to know it – because there’s something incredibly terrifying about going toe-to-toe with the best. 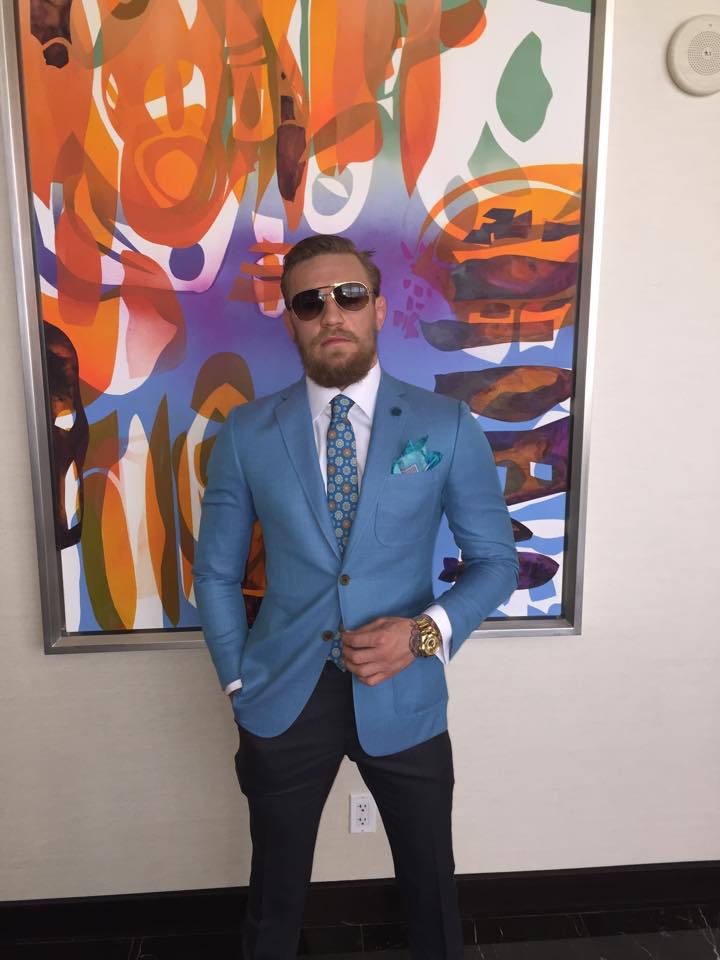 Of all the unique aspects of McGregor’s appearance, his affinity for suits in an anti-suit culture is the most glaring and obvious.

Most men his age would look for any chance they good to get out of suit, whereas McGregor finds any opportunity he can to wear one.

It’s a movement that is increasing amongst athletes across many disciplines. They, like McGregor, understand that a man has to dress for success, and that the appearance of accomplishment off the court or out of the ring can often lead to success within the sport.

His suits are all custom made for him and he never chooses a simple navy or grey. The cut, cloth, and customizations are all chosen to draw attention.

At the same time, his suiting is actually pretty decent. It’s one thing for a man to embrace the caricature aspect of wearing suits, but McGregor doesn’t make the same mistakes we saw of the NBA in the 90’s.

He doesn’t simply choose his suiting because it’s different, he actually has an elevated level of taste is demonstrated by what he chooses to wear.

He may mix more patterns, wear narrower lapels, and embrace bolder linings than I, or other men in the sartorial world do, but his tastes vary from ours in degree, not in kind.

And don’t think it stops with his suits. He flaunts the couture brands that make his caiman alligator loafers, his dinner-plate-sized timepieces, and his in-your-face aviators.

McGregor embraces every stereotype of opulence and wealth, and uses it as a stark and effective contrast to his Celtic berserker nature in the ring.

By making himself three-dimensional, he makes himself that much more intimidating. 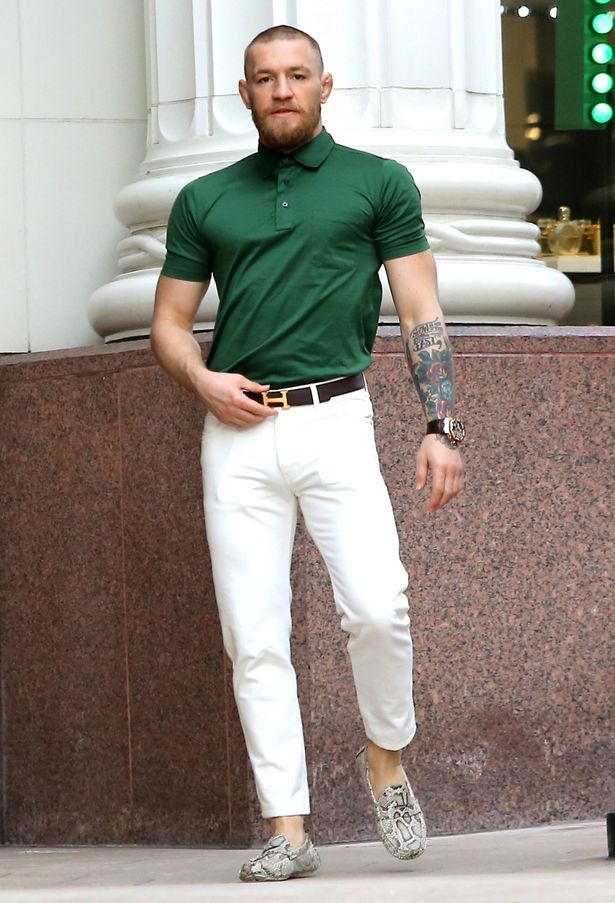 Continuing along the same path of a willingness to buck the acceptable aesthetic of the world of MMA, McGregor’s casual style is just as intentional.

His industry is one of physical, traditional masculinity. It’s one where politically incorrect insults, assumptions, and beliefs continue to thrive.

And a major part of that culture is a rejection of an appearance that’s too flamboyant.

The most common appearance-related insult coming from men like the average UFC fan is a skinny-jean wearing little bitch (or something along those lines).

So what does McGregor do? He embraces skinny jeans.

He combines the sartorial world, with the streetwear culture, and throws in a dash of his own go-to-hell attitude to create a casual appearance that’s just as deliberate and equally as off-putting as his suits.

In a world of XXL Tapout T-shirts and shorts that hang five inches past the knee, looking like he stepped out of the pages of an Esquire style guide is the best way to stand out.

And standing out is something he’s more than comfortable with.

We live in a time of globalism yet McGregor is a bit of a nationalist. He’s fiercely patriotic and proud of his home country in a way that makes most of the political elite cringe, and has become a national treasure amongst his countrymen.

In an industry of T-shirts and jeans, McGregor is a sartorialist. His understanding of clothing is different from the past few generations and representative of the current rise in menswear.

While many men both past and present see jeans and a T as the uniform of success – driven by the idea that a man has done so well for himself he can wear whatever he wants, McGregor understands that dressing well is a symbol of success – that the average man can’t afford the time, money, or social risk to wear loud, bespoke suits every day. Rather than trying to blend in with the culture of the MMA world, McGregor seeks to set himself apart.

There is no subtlety to McGregor. His suits are more appropriate for a menswear tradeshow in Florence than a business boardroom – let alone a post-fight press conference.

His body is covered in tattoos that, by both their content and their placement, would prevent him from ever working a “respectable” job.

His choice in watches, shoes, cars, and homes can be summed up as bigger, bright, and bolder.

Even what he wears when he fights and works out – which is to say, as little as he possibly can, provides a start contrast to the fighting world. Historically, most warriors are more covered up. Their armor protects their vital organs and allows them to fight another day.

Not the case for McGregor. The man would probably fight naked if he could. Because it would signal even more willingness to not only accept, but fully embrace the risks associated with his chosen lifestyle.

Conor McGregor has rejected the uniform of his tribe.

By breaking the mold with his appearance, he signals his willingness to break the mold in every other regard.

It’s a subtle and almost Machiavellian way to get into the heads of his opponents.

“I’m better than you”

“I wear better clothes, drive better cars, live in better homes, and have a better life than you do.”

“If I have all that, then why wouldn’t you believe I’m a better fighter than you to?”

Of the three Archetypes, I’ll put McGregor at:

McGregor tells a story with his style and I want you to do the same.

Learn the how men throughout time and across all cultures have use their clothing to communicate specific, masculine virtues and tell stories that lead to more success, happiness, and fulfillment.