This edition of Style in Real Life is about a man who personified the word “style” for an entire sport.

He is a BMX legend and his name is Mike Aitken

Aitken is a bit different than other men I’ve covered in Style in Real Life because his style isn’t just demonstrated in the clothing he wears, but every aspect of how he interacted with his sport.

It may sound hyperbolic but Aitken was the single largest influencer in taking BMX from its mid-school phase to where it currently is. The way rider’s bikes are set up, the clothes the wear, the tricks they perform, and the omnipresent emphasis on making everything look effortless has all been heavily influenced by Aitken and his own personal style.

Born in the early 80’s, Aitken grew up racing at local tracks. It was there he was first introduced to pro dirt jumpers like Matt Beringer and Tim “Fuzzy” Hall – the latter of which had a backyard packed full with as many berms, doubles, and lines as he could fit in.

Aitken’s racing background helped create a kid who was fearless and quickly started to separate himself from his peers in the industry.

While he picked up sponsors and had a few photos in magazine’s like Ride and BMX Plus in the late 90’s, Aitken didn’t really start to shape the world of BMX until he joined FIT a then up-and-coming bike company with a roster of riders who would all go on to shape the sport.

In the early 2000’s there were two main camps of riders – X-games athletes like Dave Mirra, Jamie Bestwick, Matt Hoffman, Ryan Nyquist, etc. who were interested in taking the sport as far as they possibly could. These men, and other riders like them, were trying to see how many limbs they could remove from their bikes while simultaneously spinning as much as possible.

The second camp consisted of guys like Taj Mihelich, Joe Rich, Van Homan, Brian Castillo, and others who had a focus that was a bit more raw. While the X-games athletes were pushing the sport in ways that made it more appealing and entertaining to crowds who had never learned more than how to bunnyhop – the raw riders were focusing on filming the best and most jaw-dropping video parts for films that would only be seen by those steeped in the culture.

These riders still had to be constantly pushing the envelope. Their tricks may have not gotten more technical, but the gaps got bigger, the stakes got higher, and lines got more interesting.

Aitken came into his own during this era, and what separated him from both camps was the simplicity of his riding.

Both camps were focusing on new, albeit their own versions of new, but Aitken went back to the old-school approach.

Rather than trying to come up with something no one had ever seen before, he stuck with tricks that had been around from the 80’s, neon-clad era of RAD – tabletops, tuck no-handers, and turndowns – tricks the sport had seen for 20 years and most considered to be basic, simple moves.

Rather than trying to move past these time-tested variations he focused on making them look better. He’d jump higher, hold the trick longer, and make it look more smooth and easy than anyone else on two wheels.

Riders who were multiple years his senior were blown away by a kid who make them feel embarrassed because their tables and moro-whips didn’t look as good as Aitken’s.

He was capable of doing the technical, crowd pleasing tricks. And, when he did, he often made them look better than other riders who relied so heavily on them, but a major aspect of Aitken’s style was that he constantly and consistently chose to focus on riding in a way that looked both fun and good – not difficult.

In fact, he often did it to the point where many didn’t realize how truly gifted of a rider he was. Watching Aitken’s on video never did the same justice to how well he rode as seeing him in person – a privilege I had quite a few times as we were close in age and lived in the same town.

Not only did Aitken help start a movement of riders who worked hard to make sure their tricks looked as good as possible, he helped change the standard configuration to which most bikes were set up.

Prior to Aitken’s rise in popularity, bikes were on a trend of being as big, heavy, and technical as they could be. 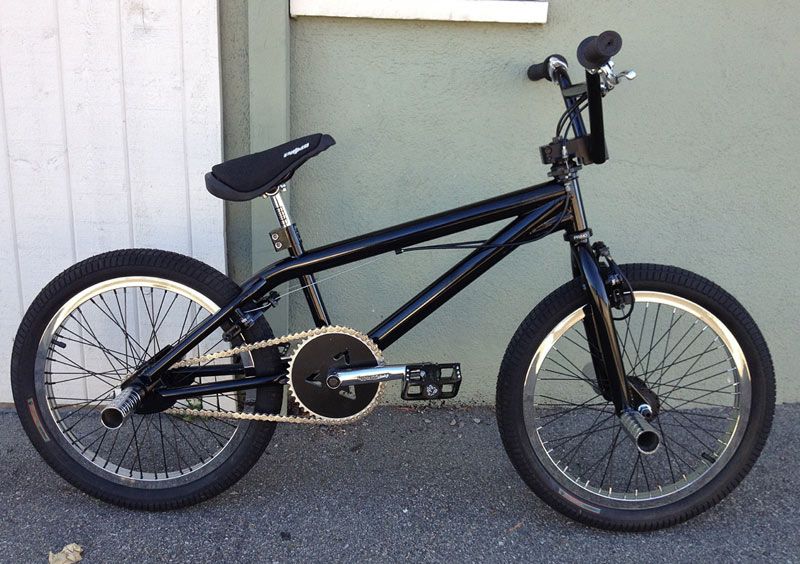 But, once again, Aitken’s approach to setting up his bike was unique and contagious. He would often ride without breaks and when he did have them on, it was only in the back and with a simple cable – nothing complicated. If he did use pegs, it was only one set on one side, and he often went without entirely.

The most glaring difference was how his seat was set up. It can seem like a trivial detail, but it made a statement and the bike setup is now the standard in the sport today.

During this era of BMX most riders had their seats set up relatively high. Doing so allowed them to pinch the seats with their knees – making it possible to let go for suicide no-handers, barspins, and truck drivers.

Rather than following suit, Aitken knew it wasn’t his style to pull off these technical tricks and, having a higher seat could often get in the way of his extensions on things like turndowns, indowns, and tables.

So he dropped his seat as low as it could. He “slammed” it to the top tube and embraced the fact that he would rarely do a bar spin. 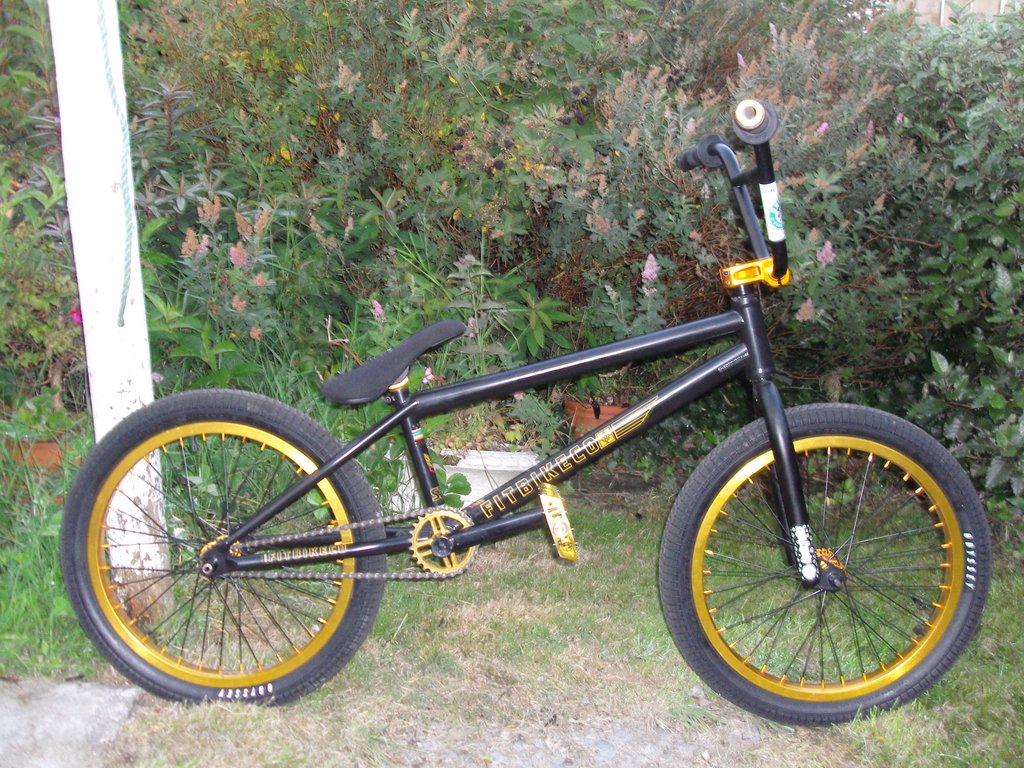 Aitken’s bike was light and minimal. It didn’t need all the technical parts because he wasn’t an overly technical rider. Nor did it need to weigh a hundred pounds because he wasn’t riding in a way that broke it. His lighter bike and smoother style allowed him to whip it around better, further extend his tricks, and make them look even more appealing than they were when he was on heavier pieces.

This influence, combined with improved technology, has made heavy, overbuilt bikes a thing of the past – a dinosaur as vintage as a pair of rollerblades or a flip phone.

We obviously can’t talk about Aitken and his style without showing how it translated over into his clothing choices.

He first came onto the scene in an era of baggy pants, big T-shirts, and chain wallets – and evidence of this is still apparent in his earlier video parts. 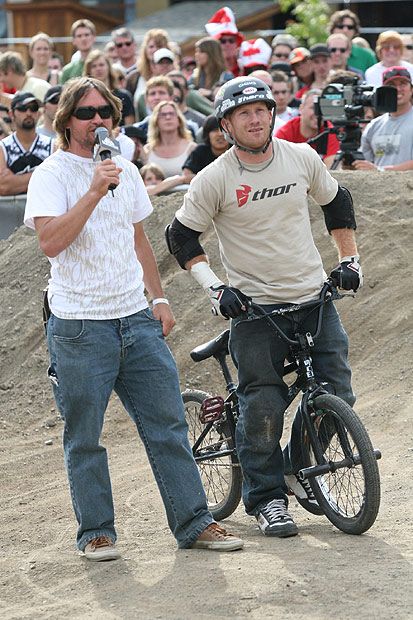 But he quickly shifted things when he started embracing a style that back in ’03/’04 was a lot different and a little risky – skinny pants.

The power of this move is lost now because skinny pants have become so ubiquitous. But they got their start in BMX.

One of the challenges that has plagued riders for years is getting your pants caught between the chain and the sprocket. Anyone who rode in a less-than-slim pair of pants knows what I’m talking about.

In the 80’s riders would tie a bandana around their leg. They’d slide this up around their thigh when not riding and then back around their ankle when on a bike. The problem is that the bandana could get caught in the pants just as easily as the jeans. 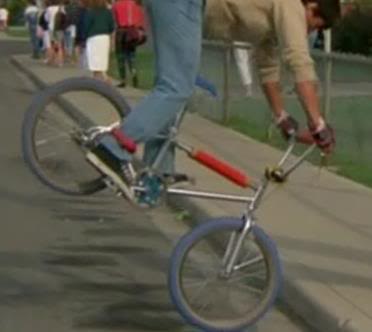 Later most riders would just deal with it or always ride in shorts.

At the time, there weren’t any groups making skinny pants for men so guys like Aitken had one of two options – tailor down a pair of the baggy pants you already own or go pick up a pair of girl pants.

I’m not suggesting that Aitken was the first one to decide a pair of skinny girl pants would solve the chain problem, but he was the one who took it from being a novel idea to a mainstream style in BMX. 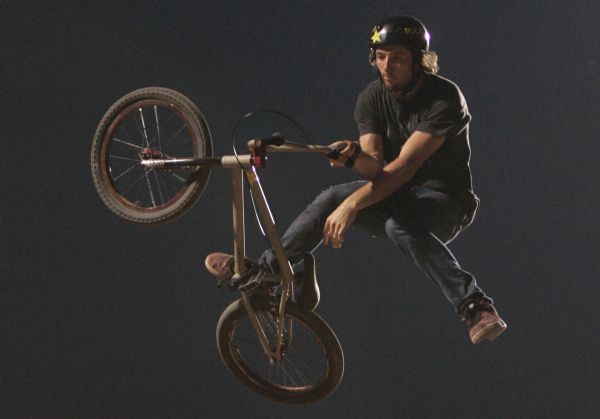 And if you think men mock guys for wearing skinny pants now, just imagine what it was like when they were still considered to be girl pants.

All the kids who wanted to be like Mike would wear those girl pants to the skateparks and concerts and be seen by non-BMX friends there – who liked the style and began to adopt it themselves.

Like them or not, you’ve seen men wearing skinny pants because of the influence of Mike Aitken.

But his style wasn’t just how slim his pants were. He was emulated in how he sagged them just the right amount, the shoes he wore, how baggy or lose his shirts were, his hair choices, and eventually his head gear.

Shortly after his Dew Tour win, Aitken was filming an upcoming video part, performing a trick he’s pulled hundreds of times, when he over rotated and landed on his face. He wasn’t wearing a helmet at the time and ended up in a coma for three weeks.

He went from being at the top of his game to being incapable of feeding himself. He had to relearn how to swallow, walk, and use his entire right side.

Within five weeks he walked out of the hospital on his own, and six months later was on a bike again.

To this day he suffers effects of that fall, but is able to live a normal life.

However, one thing that has permanently changed his that Aitken is always wearing a helmet when he’s on his bike.

And even then, it’s not the same skate helmet you see at a regular day at the skatepark, or the big full-faced number typically reserved for vert ramps and Nitro-Circus sized jumps.

Instead and true to form, he went with an old-school over-the-ear style that is both unique and familiar – just like everything else he does. 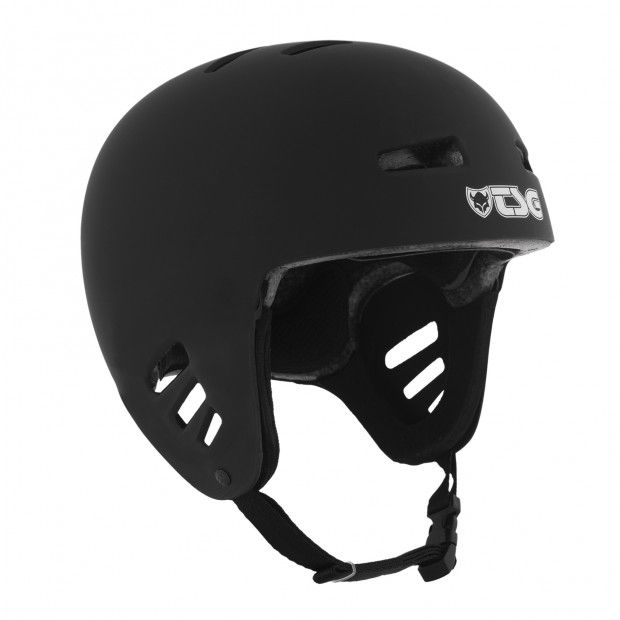 While he’s not as prominent as he used to be, he’s considered to be a legend within the BMX community and his riding, bike, and clothing style still continue to influence both that world, and ours as well.

Based on all of the above criteria, I’m going to put Aitken at:

For those who have been reading for a while, the high percentage of Rugged may come as a surprise. After all, visually his style leans very Rakish.

However, it’s important to note that all of the big changes he made to his clothing were based on function – the foundation of the Rugged Archetype and its relationship with clothing and style.