Back To Blog
Sartorialism vs Style
1 October, 2014
Clothing

I, along with many other bloggers, am typically an advocate of timeless style – the idea that there is a difference between style vs fashion; that a man’s clothing should communicate his dignity and rock-solid nature. It’s why I have the Staples series and try to teach men how to define themselves within the Three Archetypes of masculine style. Any long-time reader should not be surprised by this concept.

However, there is always a counterpoint to this argument that has intrigued me.

Being a bit of a history buff, I’ve grown up hearing a quote from Thomas Jefferson 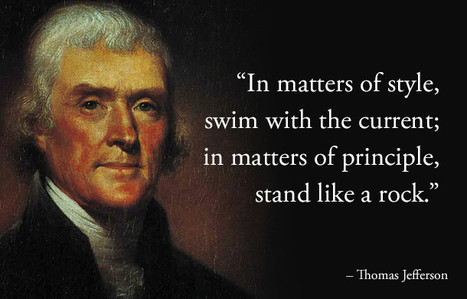 While this is obviously used to teach the principle of having a firm sense of morality. I obviously am drawn to the style aspect of it as well. Sometimes the quote uses the term “fashion” instead of “style,” but the principle is still the same.

Now, we might see powdered wigs, trifold hats, and tights as anything but inherently masculine, but during the life of Jefferson, these were the staples of successful men. We don’t walk out onto too precarious a limb with the assumption that, had Jefferson been a stickler about only wearing country clothing that communicated a more rugged form of manliness, he wouldn’t have been able to exert as much influence with the right people.

But, that’s not the purpose of today’s post. In fact, I believe we’ve significantly beaten that point to death. By now, it should be well understood that a man’s clothing is a tool in his arsenal and it should be used as intentionally and deliberately as any other option at his disposal.

The real gist of this quote – at least when not using it for its intended purpose – is that a little bit of flexibility, trendiness, and fashion sense are appropriate – even for men.

I can certainly sympathize with his stance. However, there is a large difference between men who wear suits because they have to, and those who do so because they want to. The former are the white-collar middle management, politicians, lawyers, economists, and other bureaucrats and fragilistas who tend to either tread water or make the world worse. From Taleb, a man at the tail end of the baby boom, the CEO’s, entrepreneurs, and movers and shakers of the world are men who spend more time out of a suit than in one. This aversion to a more buttoned-up appearance is certainly generational and that aspect of it needs to be considered when reading Taleb, but the point is still true. For the Baby Boomers and Generation X, the suit and tie have been the uniform of bureaucrats, not of men with real power. That wasn’t the same for the generation before, and it’s not the same for the up and coming generation either. 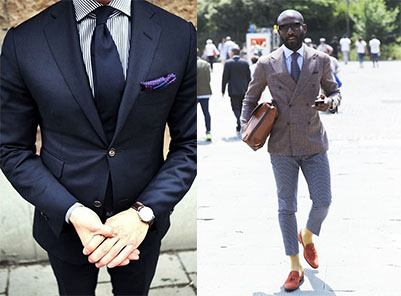 Take a look at the above photo. On the left, we see a well-made, well-fitting conservative business suit. This is already hugely better than the expected uniform of the average politician or lawyer, but I wanted to focus on principles other than fit and proportion. Even fitting as well as it does, it’s a conservative business suit. It’s still part of a corporate uniform. On the right, we see an obvious contrast in that this ensemble is pure fashion. The pattern of the cloth in the pants, the height at which they’re cropped, the color of the socks, the length of the jacket, and myriad other details are all indicative of the fact that this outfit belongs nowhere near a corporate environment.

The above binary of style vs fashion is pretty typical. I’ve been guilty of using it myself, but there’s a third element I believe a well-dressed man should consider. It falls between these two extremes, taking the outrage out of the fashion ensemble and the fragile out of the corporate uniform. Let’s call this third type sartorialism. 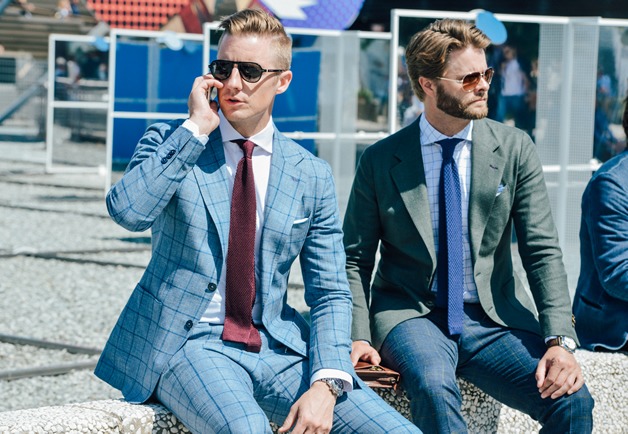 Unlike conservative business suits, those that Taleb associates with fragility, a sartorialist suit communicates both a desire to dress up, and a bit of the wearer’s personality. On the other hand, unlike an ensemble that’s pure fashion, a sartorial approach isn’t so attention seeking that it’s off putting when out of the specific context in which the outfit is completely appropriate.

Sartorialism is the realm of current trends like stacked bracelets, sockless suits, extra wide lapels, loud sneakers, neapolitan tie knots, and others. These are details that don’t pretend to be timeless, but are still acceptable for the aspiring man to wear without looking like he should never step foot out of the fashion district of a major, coastal city.

A sartorialist approach appreciates old-world details, but turns them on their head. Rather than trying to reinvent the wheel, it just takes the cart in a different direction. It capitalizes mostly on the Play aspect of the Danger and Play contrast.

In Antifragile, Taleb defines antifragility as the concept of objects or people gaining from disorder. A business suit is a uniform, it contributes to order and is negatively perceived when the man wearing it is taken out of the context of the business world. The same goes for the aggressive fashion ensemble. It certainly creates disorder when worn out of context, but it is intended for a specific, ordered audience. Fashion has little-to-no place in the business world. Sartorialism is antifragile. A suit or ensemble like the two pictured above will communicate abundance and an embrace of risk whether they are worn in a business or casual setting. They create disorder by breaking from the norm, and proceed to strengthen the image of the man wearing them.

So if a man finds himself feeling overly restricted in his traditional business wear, but knows it’s inappropriate to dress like a runway model, a sartorial approach may be just the thing he needs to separate himself from the pack.