Tag: back to school for men

I’m working on a consultation right now for a man who runs with both a creative SWPL and a blue-collar crowd. He has to be able to come up with artful, attractive ideas and then build them himself as well. It’s been a fun consultation thus far as his situation is pretty unique and challenging.

One of the things I’ve found for him is something that can be used for almost any man who wants to mix white and blue-collar worlds together.

It’s still a briefcase and is aesthetically pleasing and it’s a carpenters bag that’s made of durable materials you’re not afraid to throw tools or books into or leave lying in the dirt for a few hours while you work. The blue is deep enough not to pop and it allows the leather to do so.

While this advice applies to any man, I’m specifically talking to those of you who will be entering a completely new situation this Fall – whether that’s going to college for the first time, starting an internship or new job, or moving to a new high school. As humans we tend to take our time and feel out the water first before we really dive in to any situation. I understand the philosophy behind it, but there’s a more masculine way to handle things.

When you head to your first day of class/the new job/that internship  go in like a shark into a school of fish. I’m not a blank-slater but I do believe that the majority of people are inherently good. That being said, I also believe that the majority of people are happy and content being a fish who fits in with the rest of the school. It seems our world is continuing to value uniformity and safety more than uniqueness and freedom and this just makes the contrast of a shark that much more apparent.

You will have people who resent you. Being a shark will win you friends and respect but it will also get you enemies and hatred. You have to be willing to handle both. A fish in the middle of a school doesn’t have either – he just is. I don’t fault people for taking that route, but this site is geared towards men who want to be the shark.

For me the hardest thing about being the shark is that there is no time off. He can’t turn into a fish when he’s lazy or doesn’t feel up to hunting because he’s already established himself as the shark. It’s an all or nothing situation and you have to commit to it. But, if you’re up for it, the rewards are so much more than you’d ever get by just fitting in at school.

I had a friend in high school who once wore the exact same outfit every day for a month just to see if anyone would notice. We did. He looked stupid and smelled even worse. While variety is the spice of life, sometimes there are items that you only buy one of. As great as it would be to have a different car to drive every day of the week, most of us just get by with one.

The pack you use for school will fall into that same category. Your clothes will change but you’ll carry that same bag almost every day. So it’s important to make sure it’s one that works and looks good.

Just like with the other Back to School posts, the first thing you’ll need to determine is your level of formality. A third-year law student should avoid a skater pack and a junior in high school doesn’t want to carry a leather brief case around.

If you’re hard on your stuff or you use your backpack in precarious situations, you’ll want a skate pack like the Nixon

one above. Don’t go easy on it as it’s built to withstand some abuse. The skate pack has evolved into something more simple and streamlined so it doesn’t stand out like a sore thumb if you’re wearing one with a blazer and some bucks. Perfect for high school and undergrads, it’s time to upgrade if you’re a grad student though. 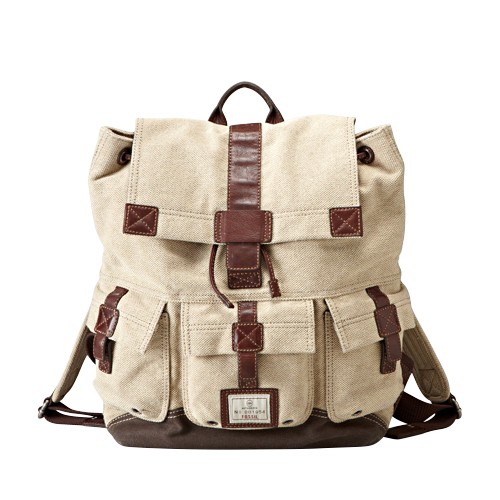 Trail packs and rucksacks have been using by adventurers forever. Think of them as the still-stylish cousin to your ratty cargo shorts. The military history gives them a distinctly masculine feel and the extra pockets go a long way in helping you carry things like phone chargers, sunglasses cases, etc. The beauty of a rucksack is that it mixes utilitarianism and tradition perfectly so you can carry one of these your first day of high school or in your last year of med school. It’s the perfect High/Low pack.

This was my personal choice my whole time in college. It fit a laptop and the occasional book or two without bulking up too much. I also liked having the one strap instead of carrying two on my back. A canvas option

is going to be more casual and it’s also going to cost you considerably less. And, while it’s not as bulletproof as the Skate Pack, these things were originally made for hard-riding messengers and will get the job done. There’s an unspoken association between messenger bags and college so I won’t recommend this for a high-school kid. 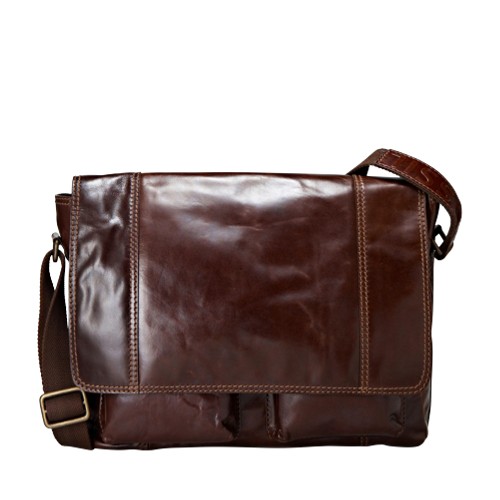 Works the same as the Canvas Messenger but steps things up in the formality, durability, and price departments. Since they are more formal this is something you’ll want in your last year of your undergrad or in grad school. Think of it as Indiana Jones’ briefcase. It’s nice and will keep your documents/laptop safe but it will survive a bike crash or being chased by the natives. With anything you do in leather, choose brown instead of black. It’s still formal because it’s leather but it’s more versatile with what you’ll be wearing and the situations you’ll be in by going with brown.

The most formal on the list is obviously the briefcase. You want to avoid the hard cases that were ubiquitous in the 60’s and opt for something softer and all leather

. These can range from a couple hundred bucks to thousands of dollars. The thing about a brief case is that it communicates you’ve already arrived. If you start carrying one too young or without the right confidence it’ll be easy for everyone to tell. It is just a bag, but a brief case is still a symbol that demands a certain amount of respect so make sure you have the acumen to demand that same respect yourself.

A pack is going to be used everyday so you also want to make sure the function fits your needs. It’s pointless to have a beautiful briefcase when you ride a motorcycle to school and don’t have any shoulder straps for it. Lastly, look to historical men’s bags for inspiration. You will find classic shapes and functions along with visual references to masculinity by sticking with something tried and true.

Most of the dopp kits I’ve shown in the past fall into the clean-cut category. Unfortunately kits like that aren’t suitable for something like camping or, for many, a first year at college. Here’s and iteration that’s a lot rougher on the edges and built to take some abuse.

I hate to be a buzz kill but we’re on the final stretch of summer. For a lot of you guys, it’s time to start getting ready to go back to school. Quite a few of my readers are guys who are in high school or starting college and this can be a sartorially difficult time to navigate. You don’t want to look too young or too old. You want to look better without painfully standing out.

The whole month of August is going to be largely dedicated to back-to-school prep. There will be other posts peppered throughout but I want to help you guys step up your game while you still have access to the parental wallet to help you out. And even if you’re trying to get ready on your own funds or a tight budget, I’ll be addressing some of the principles, not just specific items, that are school appropriate.

As an added bonus, all Basic Consultations will be dropped from $25 to $15 for the month of August – even for your older men who are finished with school. By getting a Basic Consultation you’ll be able to know what colors, patterns, materials, and other variables are going to look best on you and fit your lifestyle. Then you can take those principles and apply them to what you learn this month to ensure you’re looking your best once you’re stuck in class all day again.